TTIP Reading Room: A small step toward transparency | World | Breaking news and perspectives from around the globe | DW | 29.01.2016

TTIP negotiations have been running since 2013, yet German parliamentarians have only recently been allowed to read the documents. Now, documents have been made available in a high-security reading room. 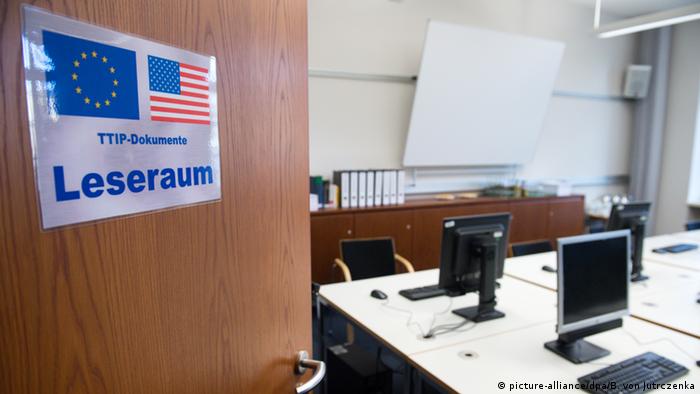 The German Economics Ministry on Berlin's Scharnhorststrasse is about two kilometers away from the Brandenburg Gate. Last November, the "STOP TTIP" alliance met Martin Schulz, President of the European Parliament, at the Brandenburg Gate and presented him with almost 3.3 million signatures. Nearly half of the signatories were German.

Criticism of the transatlantic trade and investment agreements extends beyond the anti-globalization movement and has already spilled over into traditionally conservative groups: more than 2,000 small and medium-sized German enterprises have already joined the initiative "SMEs against TTIP", initiated by five entrepreneurs from the engineering, beverage, food, trade fair construction and service sectors. There are similar initiatives in other European countries; for example, England, which has the "Business Against TTIP" initiative.

There is one point that the critics all agree on: they accuse negotiators on both sides of the Atlantic of secrecy. The public learns very little about the trade partnership and only has access to selective information about the subject of the negotiations. And yet, TTIP will greatly influence the development of national policies, such as technical and social standards or tax policies. The European Commission is trying to respond to the massive criticism by launching public relations campaigns. As always, it is maintained that TTIP negotiations are characterized by a high degree of transparency. 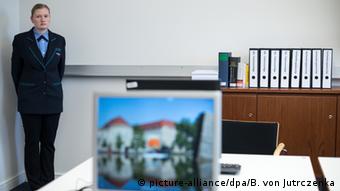 The most recent step toward more transparency in a confusing marathon of negotiations is the opening of a reading room in the German Economics Ministry. Starting Monday, February 1, three groups of people will be allowed to view the negotiation documents: members of the German government, members of Germany's upper house of parliament (Bundesrat) and members of Germany's lower house of parliament (Bundestag). After all, they will be voting on the agreement at some point.

The conditions are, however, marked by a profound mistrust of the representatives of the people and strict regulations: MPs cannot take cell phones, laptops or other electronic devices into the reading room. They may only view the documents under supervision. Parliamentarians may only take handwritten notes, but not to make copies of documents.

A member of parliament from the Green Party, Catherine Droge, has revealed yet another stipulation. "We are obligated to sign that we will maintain absolute secrecy about the content of the documents," she said. Any member of parliament who makes the content of the documents public faces a prison sentence. The chairwoman of the Green Party in the committee for economic affairs and energy finds it scandalous because, in her view, "the public has a right to know what is being negotiated on their behalf," said Droge in an interview with DW.

One must know that the word "parliament" comes from the Italian word "parlare," which means "to talk." MPs talk together on behalf of the electorate: they take part in discussion and debates, and they fight for solutions and compromises. If you look at the reading room rules, this is not possible with TTIP, says Max Bank from the organization Lobby Control in Cologne. "In terms of democratic public opinion, this is unacceptable," concludes the EU relations officer from Lobby Control. 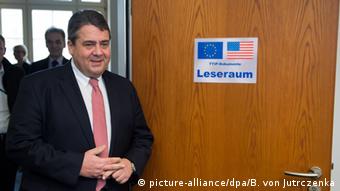 Economics Minister Gabriel is hoping for a more open approach

At the presentation of the reading room on Friday, German Economics Minister Sigmar Gabriel let it be known that he could imagine a much more open approach to the negotiation documents.

Gabriel knows what he is talking about: after a question that had been posed in parliament by the Green party in 2014, the German government had to admit that it had no insight into the negotiation documents. Only in May 2015 was the reading room for employees of the government established - on the premises of the US Embassy in Berlin, under the same strict conditions as it is now in the economic ministry.

According to Green MP Catherine Droge, it has not been used very frequently. She points out the government's response to another question that her party posed in mid-January: the reading room at the US Embassy had been visited a total of 37 times, but not once by a German minister.

A Europe-wide initiative of citizens has collected over three million signatures against the TTIP trade agreement negotiated between the EU and the US. A spokesman for the organization called it a huge success. (09.11.2015)

Obama will visit Germany in April to boost trade ties

US President Barack Obama will visit Germany in late April to attend the world's largest industrial technology trade fair and meet with Chancellor Angela Merkel. Advancing trans-Atlantic trade talks are on the agenda. (30.12.2015)

The EU and Australia have agreed to start negotiations on a free trade agreement (FTA). The two sides are looking to boost growth and investment, and counterbalance potential trade pacts with the US. (15.11.2015)