US President Donald Trump has unveiled a new immigration policy that aims to increase the proportion of skilled migration to the United States. But the plans have set a potential collision course with Congress. 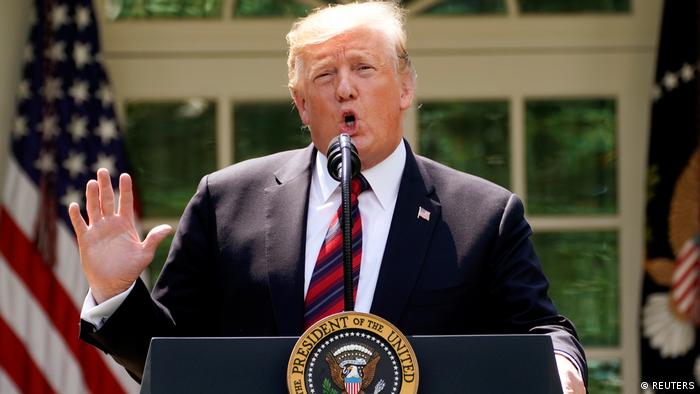 In a speech at the White House on Thursday, US President Donald Trump laid out a merit-based immigration plan that would give preferential treatment to high-skilled workers.

"Our plan includes a sweeping modernization of our dysfunctional legal immigration process. It is totally dysfunctional," said Trump, noting his administration wants to increase security at the border and reduce claims from asylum-seekers.

The reform, Trump said, would make the US immigration system the "envy" of the world.

Under the plan, the number of green cards given to approved immigrants would remain the same. But far more would go to exceptional students, professionals and people with high-level and vocational degrees.

Factors such as age, English language ability and employment offers would also be considered. Far fewer green cards would be given to people with relatives already in the US; 57% would be awarded on merit, as opposed to the current 12%.

Trump's plan, which has been roundly panned by Democrats and immigration advocacy groups, is aimed at trying to unite Republicans — some of whom want to boost immigration, others who want to restrict it — ahead of the November 2020 presidential and congressional elections.

Senate Minority Leader Chuck Schumer, a Democrat, criticized the White House for failing to consult with Democratic lawmakers and said this showed the proposal was not serious.

The plan also does not address what to do about the millions of immigrants already living in the country illegally, including hundreds of thousands of young "Dreamers" brought to the US as children — a top priority for Democrats. They are currently protected from deportation by the Deferred Action for Childhood Arrivals policy, which Trump has tried to end.

The plan also does not reduce overall rates of immigration, a wish of many conservative Republicans.

"A plan that forces families apart, limits access to asylum and other humanitarian relief, and doesn't contemplate a path to citizenship for DACA recipients and other undocumented community members is clearly a political stunt intended to posture rather than problem-solve," said Lisa Koop, director of legal services at the National Immigrant Justice Center, speaking with The Associated Press.

The plan was developed by Trump's son-in-law and senior adviser, Jared Kushner, and Stephen Miller, an adviser known for his hard line on immigration issues.