Immigrants strive for US passports out of fear of future | Americas | North and South American news impacting on Europe | DW | 24.07.2017

Immigrants strive for US passports out of fear of future

Immigrants in the US on temporary visas worry the Trump administration could send them home. New York's Nepalese community, in particular, now sees gaining citizenship as an urgent matter, Maya Shwayder reports. 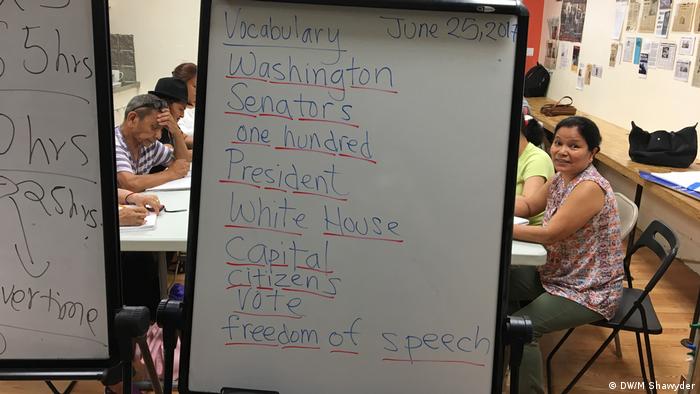 In a small conference room, buried deep in Queens, New York, about 15 people are gathered on a Sunday practicing some basic English sentences.

"The president lives in the White House," the teacher says.

"There are one hundred senators."

At one point during an assignment, another instructor peels away to teach one student what the letter "z" is.

Read more: On 'Day Without Immigrants,' Washington DC learns exactly what immigrants do

But this isn't just an ESL class. The students range in age from early 30s to mid-60s, and nearly all are immigrants from Nepal and Tibet. They are here this afternoon because they want to become US citizens. One of the steps to citizenship is taking a 10-question quiz, of which one must answer six questions correctly.

Afghan girls compete in US after outcry over visa denials

The teachers, both of whom are immigrants from Nepal and are younger than their students, run through a series of language and citizenship drills, switching back and forth between English, Nepali and Tibetan. Concepts like what exactly freedom of speech is and who may vote in the United States are hammered home in all three languages.

One elderly man in the class is preparing to take his citizenship exam the next day - for the second time. He failed his first test. The teachers fret that although he knows all the answers to the citizenship exam questions perfectly in Tibetan, he still struggles in English.

"We don't ask for people's status when they come to the class," said teacher Tsering Lama, who emigrated from Nepal in 2008. "But with this new administration, it's made people more aware of the need for a more permanent status."

Adhikaar is easy to miss: A small, red building nestled into the Elmhurst neighborhood of Queens. Over its 12-year history, it has grown from a one-room office with a few part-time workers to a full-on community-organizing operation with two dozen part- and full-time employees. The center provides everything from English and immigration classes to legal advice and healthcare. All advertising is through word of mouth, and their classes are fuller than ever before. 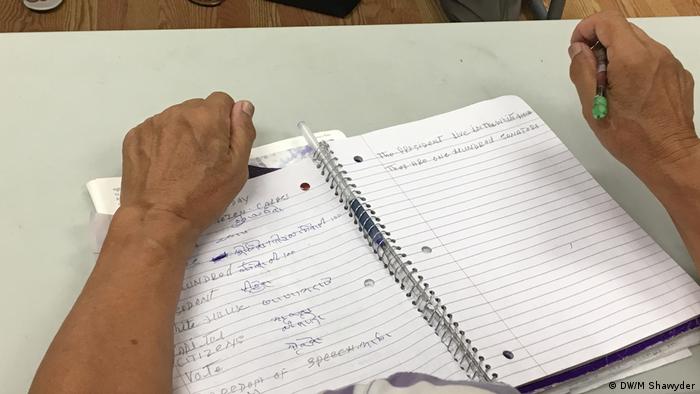 "We never distributed a flyer," said Narbada Chhetri, 52, director of organizing and advocacy. "Wherever you go in the world, grassroots is grassroots."

Chhetri came to the US in 2006 and started working at Adhikaar in 2007. Since then, she has seen it grow from two rooms to a whole building.

"After the 2016 election, it was a difficult time, because this was out of our imagination," Chhetri told DW. "People were asking, 'How do I go to work?' 'What if they arrest me while I'm traveling?' 'What should we do?'"

Even with their Temporary Protected Status (TPS) visas renewed, Chhetri said many people are afraid to travel to Nepal to visit family for fear of not being let back into the country.

A lifeline yanked away

By the end of 2016, 12,967 people from Nepal were beneficiaries of TPS, the US Office of Citizenship and Immigration Services told DW. TPS visas must be renewed by the presidential administration every year. For some Nepali people who received a TPS visa - many of whom were undocumented - this was the first time they had access to legal work permits, healthcare options, and the ability to live legally in the United States, said Lama. 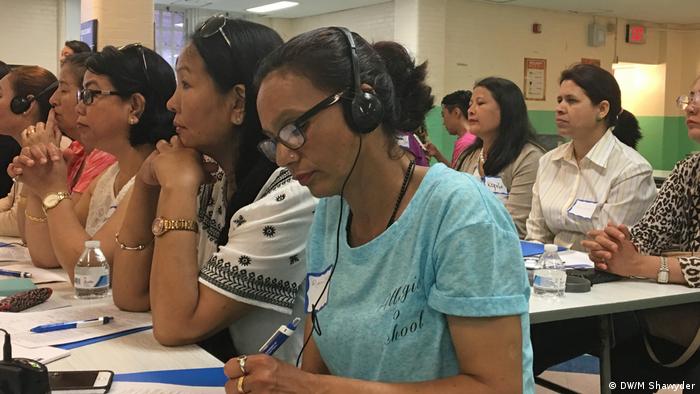 The Obama administration renewed the TPS visas in November 2016, ensuring that anyone from Nepal with a TPS visa would be able to stay until June 25, 2018. "It got renewed last minute. It was supposed to run out on December 25th, 2016," said Lama. "In a matter of weeks, we had to organize TPS clinics to help people get it renewed. We were taking calls from all around America."

In the end, Lama said, they helped around 1,500 people register for TPS visas in a matter of two weeks.

But whether or not the Trump administration will continue to renew TPS visas is an open question that has many in the community worried.

"Last year, when the administration was friendlier, we did some internal pushes" to have people register under TPS, said Lama. Some of the Adhikaar staff even went to DC to lobby for TPS.

"This administration is not fond of TPS. There is big fear of the future of TPS, so we'll be starting a new TPS campaign soon," Lama said.

If TPS ceases renewing, people in the community will either be deported or once again be living as undocumented immigrants, a legal position that is increasingly precarious in Trump's America.

During the Sunday English class, a former student named Phoolmaya Gurung, 40, returned after successfully completing her citizenship exam. She showed the class her new certificate of US citizenship and accepted their applause with a smile after answering a barrage of questions in Nepali about what was on the test and how hard it was.

"I just help encourage them and tell them not to panic," Gurung told DW. "It's a stressful process." 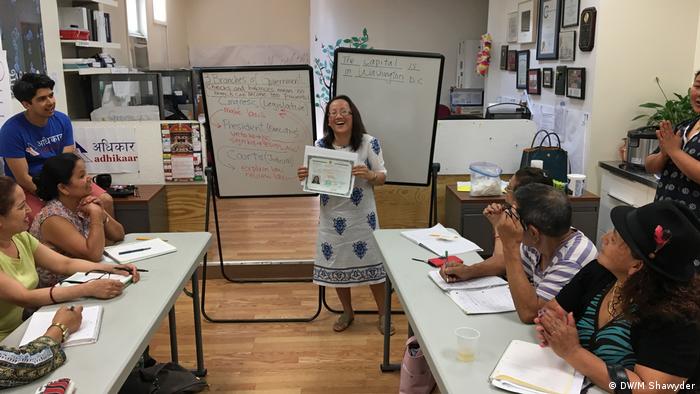 Gurung has also been in the United States since 2007 and said she applied for a green card, and then for citizenship, as soon as she was qualified. The election of Trump, Gurung said, was a wake-up call for everyone.

Before Trump was elected, it never occurred to her that her legal status might be in jeopardy. "Then from when he was in the White House, I thought 'Oh, we could be deported any minute,'" Gurung said. "I thought maybe if I'm a citizen I'll be protected. But I don't know. Even being a citizen, I don't feel protected."