Donald Trump has warned General Motors that it's "playing around with the wrong person" following plans to close multiple plants in North America. Almost 15,000 jobs will be shed in Ohio, Michigan, Maryland and Ontario. 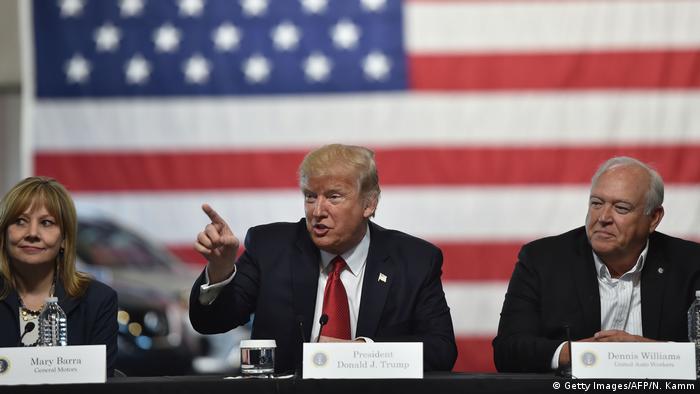 General Motors (GM) may have delivered net income of close to $2.5 billion (€2.2 billion) in the third quarter of 2018 and be on a sound financial footing, but the company's intention to cease operations in three Midwestern states and the Canadian province of Ontario has been met with disdain by the US president.

Plans were announced on Monday to cut the GM workforce by 15 percent in a move that will hit white-collar workers hardest, but would also see more than 6,000 production line jobs go as the carmaker looks to invest in future technologies. These would most likely affect three assembly plants in Detroit, Ohio and Ontario as well as two factories in Michigan and Maryland that build transmissions and batteries.

"They better damn well open a new plant there very quickly," Donald Trump told The Wall Street Journal. "I love Ohio. I told them 'you're playing around with the wrong person.'"

Trump added: "I said 'I heard you're closing your plant,'" he recalled from his conversation with GM CEO Mary Barra. "It's not going to be closed for long, I hope, Mary, because if it is you have a problem."

Mary Barra, CEO of General Motors, says the job cuts are in order to invest in future technologies.

Trump's threats come 16 months after Trump visited Ohio, a state he won in the 2016 election by more than 8 percentage points, and promised residents that their jobs are "all coming back." However, the president's policies have contributed to the problem, according to GM, which has pointed towards rising costs for suppliers, namely steel tariffs.

On Tuesday, Trump threatened to cut all subsidies to GM.

Stefan Kooths, economics expert at the Kiel Institute, claims that the White House's protectionist policies are starting to harm the American economy.

"We warned early on that these measures, such as protectionism in aluminium and steel, are rapidly spreading to other industries," Kooths told DW. "Ultimately, the US economy suffers as much from these sanctions as the rest of the world. This will make everyone poorer and the American car industry will be the victims of US protectionism.

But Kooths warned that while tariffs and protectionist measures implemented by the Trump administration are a contributory factor, they are not the only reason for the issues GM is facing.

"The problems of GM certainly do not go back only to the higher steel prices," Kooths said. "They also have something to do with the need to re-adjust the model palette. Some chiefs are now too quick to push everything on the tariffs. But clearly these are the negative boomerang effects that then hit your own economy."

GM says the decision was taken to help its investment in electric and autonomous vehicles, with Barra defending the decision as a pre-emptive step necessary to take during strong economic times to protect the company through future economic slowdown.

GM was bailed out by the American taxpayer a decade ago, with the company nationalized for a short period after the 2008 financial crisis.