The US president has repeatedly asked aides about buying the world's largest island, the Wall Street Journal reports. Denmark, which presides over Greenland, has branded the idea an April Fool's joke. 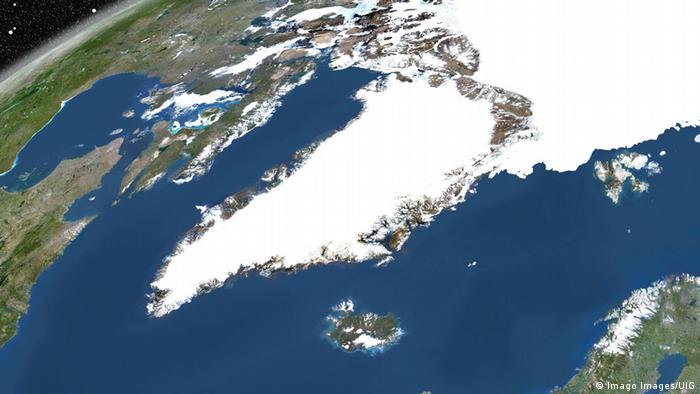 White House aides have reportedly looked into the possibility of the US buying Greenland after President Donald Trump mooted the prospect on multiple occasions.

The Wall Street Journal (WSJ) on Thursday cited unnamed advisors as saying the US leader asked his staff to "look into the idea" of purchasing the world's largest island, an autonomous country that forms part of Denmark.

The report said Trump, who is scheduled to make his first visit to Denmark early next month, has repeatedly asked advisers whether the US could acquire the territory, 80% of which is covered by a permanent ice sheet.

There is no indication that the purchase will be on the agenda for his talks with Danish officials.

The WSJ said Trump had spoken with varying degrees of seriousness of the idea. The sources said he had expressed interest in the autonomous Danish territory's resources and geopolitical importance.

The newspaper said the president may seek to strengthen Washington's military presence in the Arctic. Thule Air Base is currently the US's northernmost installation.

The Associated Press later cited an anonymous Trump ally who admitted that the president had discussed the idea but was not serious about it.

Copenhagen immediately rubbished the idea that Greenland was up for sale.

"It has to be an April Fool's joke. Totally out of season," former prime minister Lars Lokke Rasmussen said on Twitter.

The populist Danish People's Party's foreign affairs spokesman, Soren Espersen, told broadcaster DR: "If he [Trump] is truly contemplating this, then this is final proof that he has gone mad."

It wouldn't be the first time an American leader tried to buy the island. In 1946, the US proposed to pay Denmark $100 million (€90 million) to buy Greenland after flirting with the idea of swapping land in Alaska for strategic parts of the Arctic island.

Lying between the North Atlantic and Arctic oceans, Greenland is mostly self-ruled, though Denmark remains in charge of foreign affairs, defense and monetary policy.

The 2-million square kilometer (772,000 square-mile) island is home to just 57,000 people, most of whom belong to the indigenous Inuit community.

Greenland is suffering from the effects of climate change, according to scientists. Its 3-kilometer thick (1.9-mile) ice sheet is melting and threatens to submerge the world's coastal areas one day.

July saw unprecedented melting of the ice sheet, with 12 billion tons of ice flowing into the sea.

The disintegrating Greenland ice sheet is the leading cause of global sea level rise. And, according to a new study, it's melting faster than it ever has in recorded history. (05.12.2018)

A heat wave that brought record temperatures to Germany has moved over Nordic countries. Scientists are warning of possibly accelerated melting of ice in Greenland. (27.07.2019)