Greenland is monitoring a giant iceberg drifting off its coast, with fears it could break up and flood a part of the Danish autonomous territory. A rising number of icebergs are increasing tsunami risks in the region. 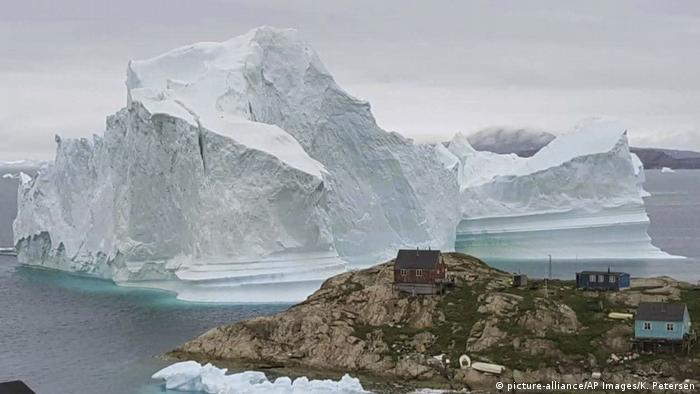 Authorities warned shoreside residents of Innaarsuit Island in Greenland they were at risk of being flooded, after a 100-meter (300 feet) high iceberg was spotted drifting off the coast on Thursday.

The police are on high alert and have moved a search-and-rescue helicopter closer to the remote village, which has about 170 inhabitants.

"We fear the iceberg could calve and send a flood towards the village," Lina Davidsen, a security chief at the Greenland police, told Danish news agency Ritzau on Friday.

The iceberg was reportedly grounded and did not move overnight, state broadcaster KNR reported.

Susanne K. Eliassen, a member of the village council, told the local newspaper Sermitsiaq that it was not unusual for large icebergs to be seen close to Innaarsuit, but that this was the biggest she had seen.

"And there are cracks and holes that make us fear it can calve anytime," she said, adding that the village's power station and fuel tanks are close to the shore.

The iceberg hunters of Newfoundland

The current fears come only weeks after scientists released a video of a massive iceberg breaking free from a glacier in eastern Greenland.

"Iceberg production in Greenland has been increasing in the past 100 years as climate change has become stronger," William Colgan, senior researcher at the Geological Survey of Denmark and Greenland, said.

He added that the rising number of icebergs are in turn "increasing the tsunami hazards" which occur when they break away from a glacier and trigger a tidal wave.

Four people died and 11 were injured in 2018 after an earthquake caused a tsunami off another island settlement called Nuugaatsiaq.

10 incredible things climate change will do

Climate change will bring some surprising effects: Bumpy plane rides, greater mood swings and more volcanic eruptions are just a few of the things we can expect over the decades to come. And yes, even more lightning. (05.05.2017)

A massive iceberg has broken off from a glacier in Greenland. Scientists say the incident could be a result of global warming. (19.07.2012)