Trump presents 'challenges' to the EU, Hollande says at meeting with Merkel

French President Francois Hollande highlighted growing populism as a threat during his meeting with Chancellor Angela Merkel in Berlin. He also said the US posed challenges to trade and the resolution of conflicts. 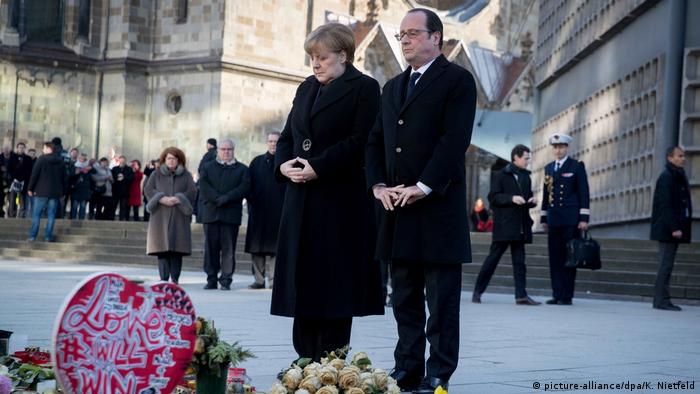 In what will probably be the last major meeting between the two European leaders before Hollande steps down in May, the discussions in Berlin on Friday focused on the incoming Trump administration in the United States and the rise of populism in Europe.

"Let's speak very frankly, there are the challenges the US administration poses to our trade rules, as well as to our ability to resolve conflicts around the world," Hollande said at a news conference in Berlin on Friday.

The French president acknowledged that Europe must engage with the new US president but called on the continent's leaders "to do so with a European conviction and the promotion of our interests and our values."

Chancellor Angela Merkel called on Europe to defend free societies and free trade in light of rapidly changing global conditions. "We see that global conditions are changing dramatically and quickly," she said. "And we must respond to these new challenges, both in terms of defending a free society and defending free trade, as well as in terms of the economic challenges."

The French president traveled to the German capital to discuss the state of European Union (EU) affairs with his German counterpoint, a meeting some hoped would reinvigorate the pro-EU perspective before Hollande steps down from office in spring 2017. He declined to run in the upcoming French presidential elections that will take place on April 23.

In addressing the extent of the EU's current challenges, Hollande also focused on the internal situation.

"What threatens Europe doesn't only come from outside. It is also from inside. This means the rise of extremists who use external factors to cause disruption internally," Hollande said, referring to the rise of right-wing populists within Europe.

Merkel seconded Hollande's remarks and appealed to Europe to defend its fundamental ideals.

"We need a clear, common commitment to the European Union, to what we have accomplished, and to the values of our liberal, democratic democracies," the German Chancellor said. She emphasized that European nations could only overcome their problems by working together.

Both Germany and France have sizable populist parties - the Alternative for Germany (AfD) in Germany and the National Front (FN) in France - that could make major gains in upcoming parliamentary elections. Both parties criticize Islam and advocate restricting immigration and reversing EU integration, although the AfD maintains a more liberal economic ideology.

The German and French leaders have said they support extending sanctions against Russia over its actions in Ukraine. Merkel cited the 'very sluggish' implementation of last year's peace deal as reason for the renewal. (13.12.2016)

A special relationship: Merkel and Hollande

French President Francois Hollande announced this week that he will not stand for re-election in the spring. Chancellor Angela Merkel, who will seek a fourth term in office next year, got on with him surprisingly well. (03.12.2016)