French President Francois Hollande warned against nationalism in his last New Year's address to France. Hollande will not run for a second term in upcoming elections. 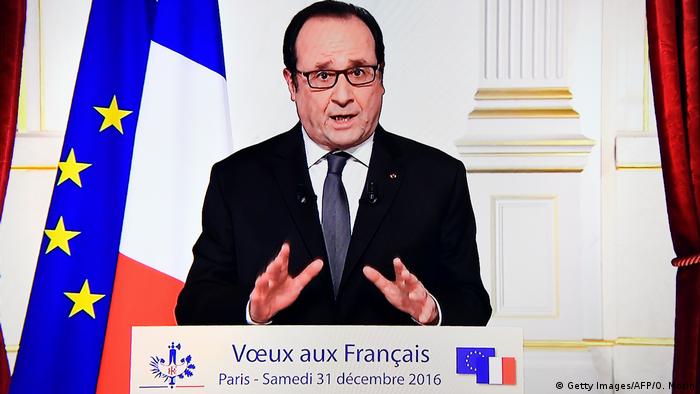 French President Francois Hollande spoke on the risks of rising nationalism in France and around the world during his televised New Year's address.

"How can we imagine our country being curled up behind walls, reduced to its internal market, going back to its national currency and, on top of that, discriminating between its own children according to their origins?" said Hollande.

This was Hollande's final New Year's address as president, as he will not seek a second term in presidential elections. The first round of elections will take place in April, and a run-off will occur two weeks later. Anti-immigration and anti-euro party National Front (FN) leader Marine Le Pen is slated to make it to the run-off should the election take place today, according to polls.

Hollande did not directly mention FN in his speech, but said the United Kingdom's decision in June to leave the European Union and the US presidential election of Donald Trump were signs that democracy and peace were "vulnerable and reversible." He also warned against calling the Paris agreement on climate change into question, calling it a "major achievement of the international community."

Le Pen dismissed Hollande's criticism. "Talking of isolation for a project that, on the contrary, takes part in the flow of history, after Brexit and Donald Trump's election…is a clear misunderstanding of the world's evolution and peoples' deep aspirations," said Le Pen in a statement.

Hollande also defended his legacy as president and paid tribute to those killed in the Bastille Day terrorist attacks in Nice and the ones on a priest and police officers. He said the terrorist threat was still alive in France.

"We are not finished with the scourge of terrorism. We must fight it further…abroad: that is the meaning of our military operations in Mali, Syria and Iraq," said Hollande.

Hollande announced he would travel to Iraq Monday to visit French troops in the fight against the so-called "Islamic State".

In her New Year's speech, German Chancellor Angela Merkel has called on citizens to go into 2017 with optimism and defy terrorism. But to guarantee "security in freedom," she said new security measures may be necessary. (31.12.2016)