France has begun three days of mourning following the deadly attack by a truck driver through crowds on the Promenade des Anglais. The state of emergency is to be extended. 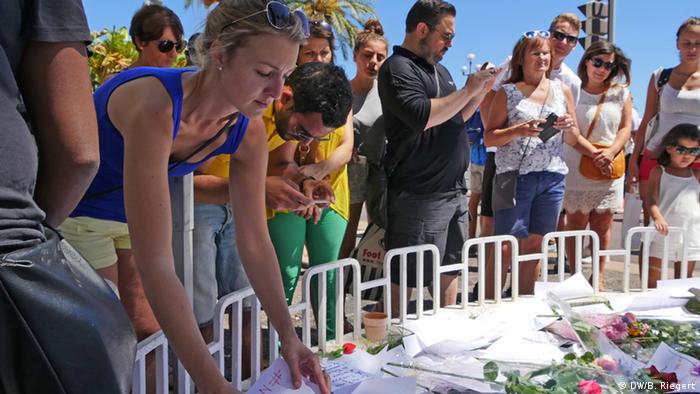 Three days of mourning have begun as people across France reflect after the nation fell victim to its third major terror attack in the space of only 18 months.

Huge crowds had gathered along the Promenade des Anglais in the Mediterranean city of Nice on Thursday evening to watch the Bastille Day fireworks, a traditional way to cap off France's annual celebration of its revolution against absolute monarchy.

It was then that Mohamed Lahouaiej Bouhlel, a 31-year-old resident of Nice born in Tunisia used a 19-metric-ton refrigerated truck to plow through the revelers, killing 84 people.

Among the dead were 10 children and teenagers, the French government later confirmed. Amongst the victims were two German high school students from Berlin and their teacher. A further 202 victims were wounded, with 52 still in critical condition and 25 in intensive care.

After driving 2 kilometers (1.2 miles) through the crowd, Bouhlel was killed after he began shooting and police and the officers returned fire.

On Friday morning, eyewitness Richard Gutjahr told DW that in the street near the attack "many of the bodies are still laying out for investigative reasons. It looks like a war scene."

In a speech outlining how France would move forward in the wake of the attacks, President Francois Hollande expressed his condolences to the families of the victims and said that France must remain strong "because we have to set an example of cohesion and unity for the world."

Hollande pointed out that the victims of the attack were of many nationalities, and that the world should be vigilant as terrorists "hope to strike at the heart of any country that values freedom," though no extremist group has yet claimed responsibility for the attack.

As the day went on, details began to emerge about the attacker, though authorities were still investigating whether he acted alone. Paris Prosecutor Francois Molins said that Bouhlel was a divorced father of three, and that his ex-wife had been taken into custody for questioning. 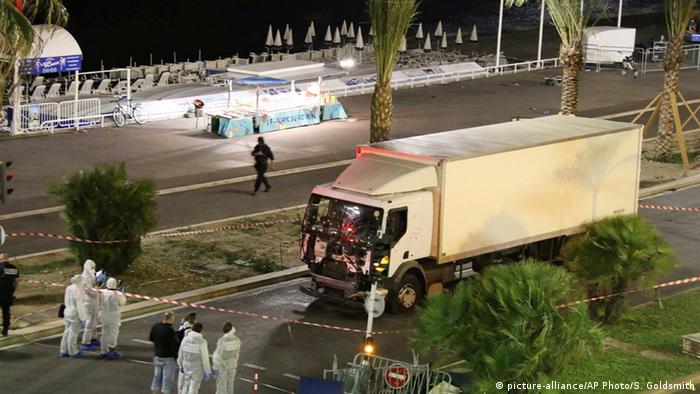 Police found an automatic pistol, along with several fake weapons, when they searched the truck

Bouhlel was not known to security authorities for any ties to terrorism or radical Islam, though he had been arrested in January following a road rage incident. He was given a 6-month suspended sentence in March because it was a first offense.

Tunisian authorities have since told the press that he also had allegations of domestic violence made against him in the past.

Solidarity from the around the world

The governments of many nations, for example Russia, the US, the UK, Mexico, Germany and Morocco offered their prayers and support for the people of France. French embassies around the world became sites of silent vigils as flowers, cards, and candles were placed outside.

"On this Bastille Day, we are reminded of the extraordinary resilience and democratic values that have made France an inspiration to the entire world," said US President Barack Obama, before ordering flags in the capital Washington to be flown at half mast.

In a later speech, the president added that following the "tragic and appalling attack on freedom," the world "will not be deterred in its fight against Islamic State."

"Solidarity at such times is the most valuable thing we have," said German Chancellor Angela Merkel.

Not every foreign message was one of fellowship however. Polish Interior Minister Mariusz Blaszczak, of the ruling right-wing Law and Justice Party (PiS) used the opportunity to blame the "multi-culti policies and political correctness" of the European Union for the spate of terror attacks across the continent in the past year. He then praised his own party for its tough stance on immigration.

State of emergency to be extended

President Hollande has said that France will extend its state of emergency for a further three months with parliamentary approval. It was due to be repealed on July 26 after having been in effect for eight months following the November 13 attacks in Paris that cost 130 lives.

He also said that the country will beef up its security sector that has been left to languish in recent years, and step up vigilance on anyone at risk of carrying out such an attack.

On Monday, foreign ministers from across Europe along with US counterpart John Kerry will meet for talks on to combat the rising tide of Islamist extremist violence in Europe.

To date, France has suffered seven terrorist attacks in which 140 people have been killed. Political scientist and France expert Ronja Kempin explains why France is so often targeted. (15.07.2016)

On Bastille Day, France was once more the target of a horrible attack that claimed the lives of more than 80 people. DW's terrorism expert Alexandra von Nahmen talks to DW about the attack. (15.07.2016)