In her New Year's speech, German Chancellor Angela Merkel has called on citizens to go into 2017 with optimism and defy terrorism. But to guarantee "security in freedom," she said new security measures may be necessary.

The year 2016 is coming to an end, and 2017 is about to begin in Germany. In her New Year's speech, Chancellor Angela Merkel said that the past 12 months "tested us in many ways." Among those, Islamic terrorism was "without a doubt" the "most difficult test." The country saw a string of attacks throughout the year: in Würzburg, Ansbach and most recently, Berlin.

Twelve people were killed when Anis Amri drove a truck through a crowded Christmas market in the German capital on December 19. The 24-year-old Tunisian came to Germany as a refugee.

It is "a bitter reckoning - and a despicable one," said the chancellor, when terror attacks are committed by people "who came here ostensibly to seek safe haven and then received help and support." These acts "make a mockery" of the German willingness to help, and also those people "who truly need and deserve our protection."

As always, the sorrow over the dead and injured is great. That was evident in Merkel's speech. But in the midst of such tragedy, Merkel called for confidence "in a firm resolve to take a stand against the terrorists' world of hate with our humanity and solidarity." 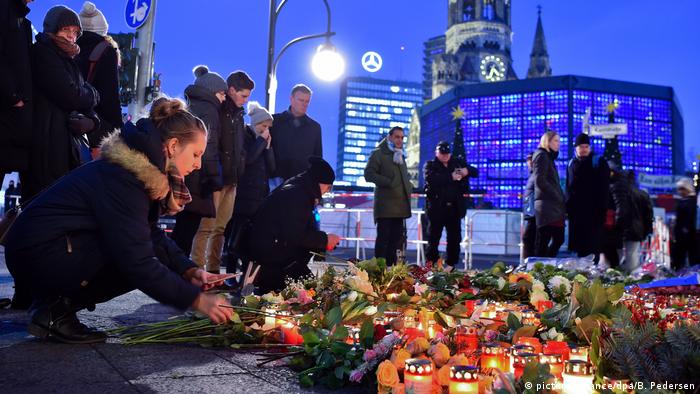 The chancellor and leader of the conservative Christian Democratic Union (CDU) confirmed her position on refugee policy in her message for the new year. "And as we are confronted with images of the bombed-out city of Aleppo in Syria, we reiterate how important and vital it has been for our country to take in those who truly needed protection, and to help them become integrated here," she said.

For the chancellor, the terrorists live in a "hate-filled world" and the rule of law and democracy run contrary to that. "We are stronger when we are united. Our country is stronger," she said, adding that the state must also stand up to terrorism in order to guarantee "security in freedom" for its citizens. "In the coming year, if necessary, the German government will quickly introduce and enact additional legal and policy measures," said Merkel.

The chancellor expressed her wish for more unity and strengthened democracy in the new year. Many people, she said, would associate 2016 with the feeling that the world had been turned upside down. Successes like the EU and parliamentary democracy were questioned because they were supposedly not concerned with the interests of citizens.

"But this is a distorted picture," said Merkel. Yes, Europe moves slowly, she said, "but we Germans should never be led to believe that each state going its own way will lead to a prosperous future."

In September 2017, Germany will hold a federal election. Merkel also made mention of this in her New Year's speech. Parliamentary democracy requires "dissent and criticism," but it must be peaceful and respectful.

"I am committed to engaging in a political process that will see impassioned debate among democratic citizens who never forget what an honor it is to serve our democracy and its people," she said.

Michael Müller, Berlin's Social Democratic mayor, has spoken out in favor of more video surveillance in the German capital. His comments represent a U-turn from the previous mandate of his ruling left-wing coalition. (30.12.2016)

The German chancellor has called for a swift and far-reaching probe into the country's security apparatus after a terrorist was able to evade authorities. Anis Amri was killed in Italy in a shootout with police. (23.12.2016)