The German chancellor has called for a swift and far-reaching probe into the country's security apparatus after a terrorist was able to evade authorities. Anis Amri was killed in Italy in a shootout with police. 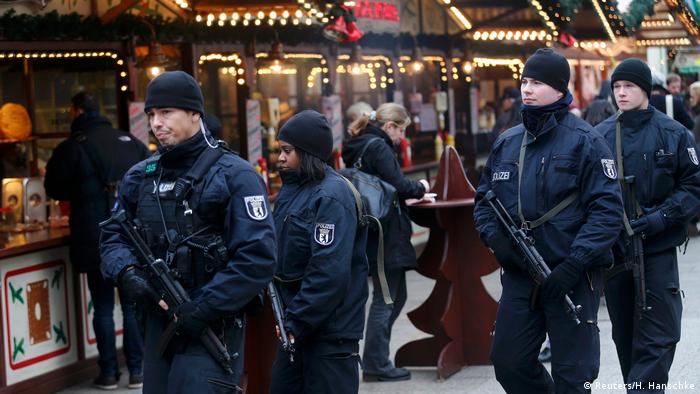 German Chancellor Angela Merkel ordered a comprehensive review of the country's security infrastructure on Friday. Her government and the Berlin police have faced hefty criticism after a terrorist killed 12 people and injured 49 at a Christmas market in the capital and managed to escape on foot.

24-year-old Anis Amri, a Tunisian national, was killed four days after Monday's attack in a shootout with Italian police in Milan. German authorities have come under increasingly intense fire from the public after it emerged that Amri was well-known to security services for his involvement with radical jihadis and was even under surveillance for six months.

How could Amri slip through the net? Michael Böhl, president of the Berlin branch of the Association of German Criminal Investigators, speaks to DW

"The Amri case raises questions - questions that are not only tied to this crime but also to the time before, since he came to Germany in July 2015," said Merkel, referring to his prior conviction for arson in Italy, for which he served a four-year prison sentence.

"We will now intensively examine to what extent official procedures need to be changed," the chancellor added, saying she had already been on the phone with Tunisian President Beji Caid Essebsi to discuss expediting the process of deporting rejected asylum seekers. Amri's application for asylum had been turned down in June, but because it took so long to confirm his Tunisian citizenship, he was able to remain in Germany.

After a massive manhunt and a number of raids across Germany, Amri was killed in the Sesto San Giovanni suburb of Milan in the early hours of Friday after drawing a gun on police officers who asked for his identification.

More came to light about Amri's victims later on Friday when the Germany's Federal Prosecutor's Office released details about their nationalities. Of the 12 dead, six were German, while the Czech Republic, Italy, and Israel have also confirmed that at least one of their citizens had been killed. The Polish truck driver of the vehicle Amri hijacked and rammed into the Breitscheidplatz Christmas market was also found dead at the scene after apparently trying to fight off the terrorist.

Amri was last seen in video footage from the front of a mosque in Berlin's Moabit district on Tuesday, according to German broadcaster "rbb." He arrived in Italy by train via France, but his exact movements during this time remain unclear.

Anis Amri, the lead suspect in the attack on a Berlin Christmas market this week, has died in a shootout with Italian police, according to the Italian interior minister. Germany has confirmed that the dead man is Amri. (23.12.2016)

A suspect in the Berlin attack comes from Tunisia. Most of the foreign jihads in Syria and Iraq also come from that country. Why are so many Tunisians recruited by "Islamic State" and al Qaeda? (21.12.2016)

Rattled but determined tourists hit Berlin's landmark attractions, saying that to keep away after the Christmas market rampage would hand victory to the attackers. (21.12.2016)

The Ukrainian military is reportedly advancing in southern Ukraine, along the western bank of the Dnipro River. The news comes days after Kyiv made major gains in the eastern part of the country. Follow DW for more.

The Indonesian government has called on police to find the "perpetrators" of the tragedy that left 125 dead. Another fact-finding team will look into the causes of the events.