Why do Vietnamese Americans support Donald Trump? | Asia | An in-depth look at news from across the continent | DW | 23.11.2020

Among Asian Americans, Vietnamese Americans stand out in one regard: Their support for Donald Trump. But younger critics are trying to change their minds. 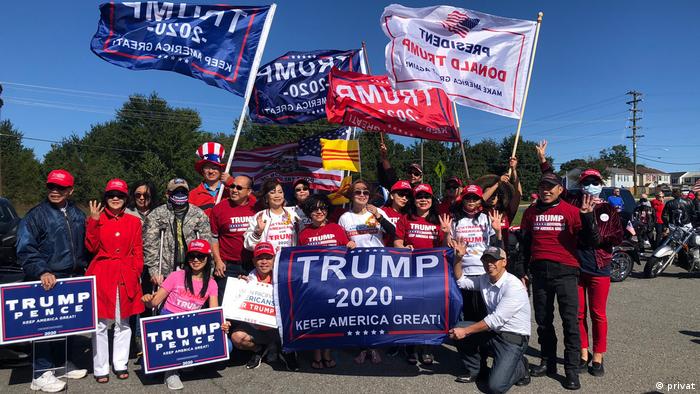 The Eden Center in Falls Church, Virginia, is a typical American strip mall, with more than 120 tiny restaurants, beauty salons and electronic retailers. Most of the stores in this mall are run by Vietnamese Americans. In the middle of the parking lot hang two gigantic flags — one American, and the other of South Vietnam, a country that ceased to exist with the fall of Saigon in 1975.

The political views of many Vietnamese Americans are shaped by the loss of their country. After communist forces from North Vietnam captured South Vietnam, many with close ties to the southern country feared reprisal and fled to the US.

At present, more than 2 million Vietnamese Americans live in the US, and approximately 1.3 million are eligible to vote in the country. Many have been loyal Republican supporters for decades and believe the party is a stronger force against communism. Even after President Donald Trump's defeat in the November 3 election, they have not lost faith in him.

"We love him," Amy, who owns a hair salon in the Eden Center, told DW. "You won't find many people here who have a different opinion." James, who has been selling karaoke equipment and shampoos in the strip mall for 18 years, supports Trump's hawkish stance on China. Ryan and Tammy, playing cards in a coffee shop, approve his efforts to stop illegal immigration.

Dream who runs another hair salon likes Trump's approach as a businessman. "I work hard," she told DW. "I pay taxes. I don't want them to be for unemployed people." A huge TV screen is hanging on the wall of her salon. She used to stream Fox News on it. After the broadcaster was among the first to call the state of Arizona for Joe Biden, she had to change the channel for good. 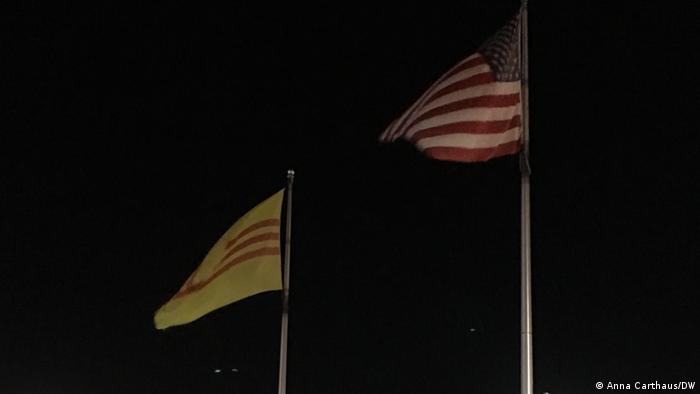 In the middle of the parking lot at the Eden Center in Falls Church, Virginia, hang two gigantic flags — one American, and the other of South Vietnam, a country that ceased to exist with the fall of Saigon in 1975

The 2020 Asian American Voter Survey showed that Vietnamese Americans are the only major Asian ethnic group that preferred Trump over Joe Biden, who is now the country's president-elect. According to the survey, 48% of them favored Trump, while 36% backed Biden.

Read more: After Trump's loss: What does the future hold for Republicans?

Michael, who was a teenager in 1975, told DW that Biden as a senator was critical of Vietnamese refugees — a misconception shared by many Vietnamese Americans. Joe Biden did not succeed to sort it out by addressing it in an op-ed in a popular Vietnamese-language newspaper.

In the Eden Center, many Vietnamese Americans are convinced that Trump did not get enough time in the Oval Office to accomplish more. This is why they voted for him, again.

Matt Truong helped organize Trump rallies in Virginia and registered new voters at the Eden Center. He was 12 years old when he fled Vietnam alone, with only two pairs of clothes. After coming to the US, he finished his master's degree in electrical engineering and became an IT director. "How many countries do you know, who would allow a boy like me to do this?" he asks.

His decisive moment to become a political activist came when Barack Obama addressed the nation in his 2012 election campaign. He said: "If you were successful, somebody along the line gave you some help. There was a great teacher somewhere in your life... If you've got a business -- you didn't build that. Somebody else made that happen." Truong felt reminded of the government's overarching role in Vietnam after 1975. For him, Obama's words were scary.

Truong is convinced that everyone should have equal opportunities but that equal outcome should not be guaranteed. "This is freedom," he told DW. He is convinced, that Democratic policies on healthcare, welfare and taxes endanger the individual's freedom. Donald Trump, who lowers taxes and regulations, represents for him a successful businessman, someone who shows power and protects the right to keep and bear arms – a warrior of freedom. 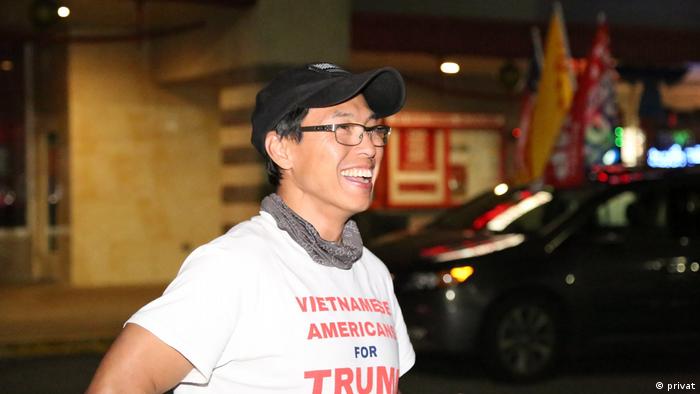 For Truong, Trump represents the idea of a successful businessman

But younger Vietnamese Americans are gradually moving away from their parents' political views.

"It saddens me deeply that many Vietnamese Americans support Donald Trump to such a degree," Viet Thanh Nguyen, a novelist and professor of English and American Studies at the University of Southern California, told DW. His feelings about Donald Trump are clear: "I think he is incompetent and dangerous both to himself and to the rest of the country and by extension, to the rest of the world as well."

Nguyen fled Vietnam with his parents in 1975. He is convinced that many Vietnamese support Trump because of a culturally inherited authoritarian system. "The Vietnamese American culture is traditional. It is hierarchical. We are supposed to listen to an older generation and to our elders. We are supposed to obey. I think that Vietnamese Americans are already sort of culturally tending towards this kind of top down personality and political structure and set of feelings. And Donald Trump just exacerbates all of that." 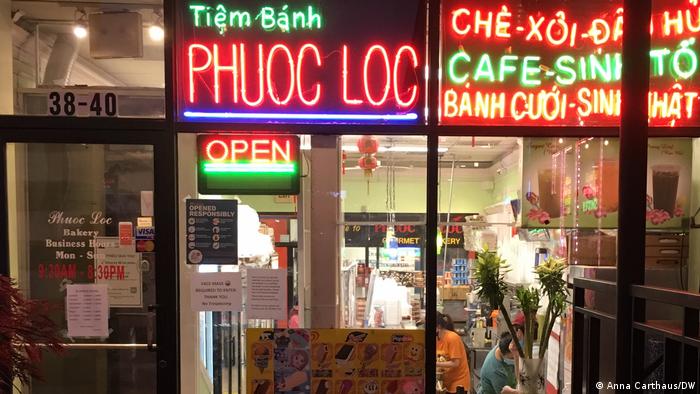 The Eden Center offers a wide variety of Vietnamese cuisine

Nguyen says younger Vietnamese Americans experience racism in the US. "They are much more likely to be exposed to people who are not Vietnamese, Asian or white. They have friends across the spectrum. And they are much more sensitive to the issues of racism than a first generation Vietnamese immigrant or refugee. So when Donald Trump says certain kinds of things about crime, black people, immigration or Mexicans, the younger Vietnamese American generation will hear these things and say: That's racist!"

Nguyen says the older generation drew much of the information from Vietnamese language sources. For the November 3 election, young Vietnamese started a bilingual website with source-verified articles.

Nguyen's novel The Sympathizer, which won the Pulitzer Prize for Fiction in 2016, shows a communist spy as protagonist. He said that many Vietnamese Americans refused to read his book.

"They wanted nothing to do with communism, even though the point of the novel was not to endorse communism, but to talk about the necessity to sympathize, to be empathetic and try to reconcile." Things changed, when he won the Pulitzer Prize for Fiction for his novel in 2016. The symbolic power of the prize meant a lot: People were proud of him, even though they did not read the book. "Everything was OK," he says. His recent political bluntness though reversed the approval: "And we're back to where we began."