US President Donald Trump has fired acting Attorney General Sally Yates, who hours ago directed Justice Department employees not to defend his travel ban. Yates' replacement has been quickly sworn in.

The White House announced on Monday evening that Trump had fired Yates for "betraying the Department of Justice" for refusing to enforce his executive order.

"Ms. Yates is an Obama Administration appointee who is weak on borders and very weak on illegal immigration," the White House said in a statement.

The new acting Attorney General Dana Boente, who will work until Trump's pick for attorney general, Jeff Sessions, gets confirmation from Senate, is expected to enforce the immigration order.

Sally Yates, who was named deputy attorney general by former US President Barack Obama in 2015, said Monday she was not convinced that Trump's executive order to bar US entry to people from seven Muslim nations was lawful.

"The Department of Justice will not present arguments in defense of the executive order," she said.

In a letter to Justice Department attorneys, Yates noted that Trump's order had been challenged in court in a number of jurisdictions.

"My responsibility is to ensure that the position of the Department of Justice is not only legally defensible, but is informed by our best view of what the law is," she wrote.

"I am responsible for ensuring that the positions we take in court remain consistent with this institution's solemn obligation to always seek justice and stand for what is right." 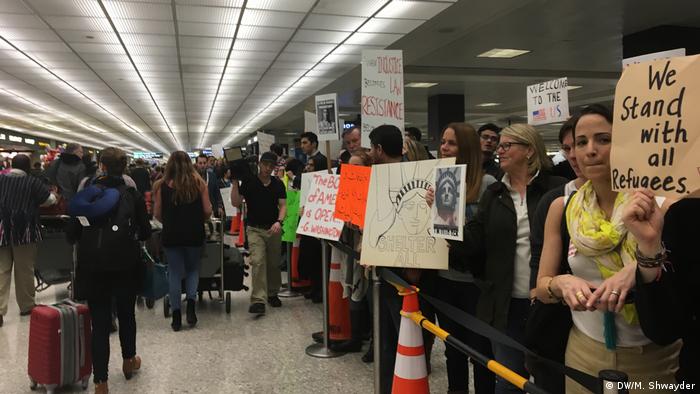 Resistance against the order

"No one is above the law - not even the president," Ferguson told a press briefing. "And in the courtroom, it is not the loudest voice that prevails. It's the constitution."

At least three top national security officials - Defense Secretary James Mattis, Homeland Security Secretary John Kelly and Rex Tillerson, who are awaiting confirmation to lead the State Department - reportedly said they were unaware of the details of the directive until Trump signed it.

Obama "fundamentally disagrees with the notion of discrimination against individuals because of their faith or religion," the former president's spokesman Kevin Lewis said in a statement .

Meanwhile, public protests against the "Muslim ban" continue in a number of major US cities.

Trump on Monday also replaced Daniel Ragsdale, the acting director of the US Immigration and Customs Enforcement (ICE), with Thomas Homan, according to the Department of Homeland Security. Homan has worked for ICE since 2013, where he has been in charge of the arrest and removal of undocumented immigrants.