Protests and legal challenges to US President Donald Trump's executive order restricting immigration from seven Muslim-majority countries have spread. Canada is to offer temporary residency to those stranded by the ban.

Tens of thousands of people turned out again on Sunday across the US to protest President Donald Trump's executive order that limits immigration for 90 days.

In Battery Park, within sight of the Statue of Liberty in New York, Democratic Senator Charles Schumer of New York told a crowd of 10,000 people that the Trump order was un-American and ran counter to the country's core values. 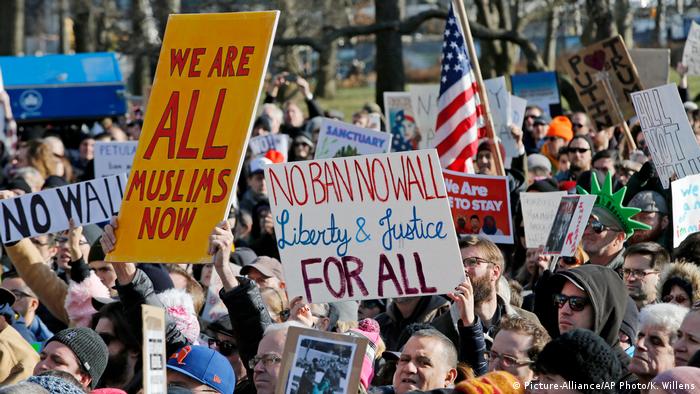 Protesters in New York near the Statue of Liberty

In Washington, thousands rallied at Lafayette Square near the White House, chanting: "No hate, no fear, refugees are welcome here." A number of protesters left the White House area and marched along Pennsylvania Avenue, stopping at the Trump International Hotel where they shouted: "Shame, shame, shame."

More than 10,000 people gathered in Boston (main photo) to hear speakers including Senator Elizabeth Warren of Massachusetts, a leader of the Democratic Party's liberal wing.

Thousands also gathered at international airports in Boston, Washington D.C., Atlanta, Detroit, San Francisco and Seattle to protest the travel ban and call for lawyers to be allowed inside to talk to those being detained.

Trump's order limits immigration from Iran, Iraq, Libya, Somalia, Sudan, Syria and Yemen for 90 days, and stops the resettlement of refugees for 120 days.

However, on Sunday, Trump announced that the US would be issuing visas to all countries once secure policies have been put in place over the next 90 days.

The administration also stressed on Sunday that permanent residents would get a reprieve from the travel ban - contradicting an earlier statement on Saturday, saying they had to request the exemption before traveling.

"Green card holders as a matter of a policy are exempt from the EO (executive order) through the national interest waiver," a senior administration official told reporters during a White House conference call.

In an official written statement issued by the White House, rather than a direct tweet from the president, Trump said "To be clear, this is not a Muslim ban, as the media is falsely reporting," Trump said. "This is not about religion, this is about terror and keeping our country safe."

Canada's Immigration Minister Ahmed Hussen announced on Sunday that people stranded in the country because of the travel ban would be offered temporary residence. The minister said that the Trump administration had given assurances that Canadians with dual nationality would not be affected by the ban.

The United Kingdom also won an exemption for its citizens and dual nationals after it emerged that high-profile British citizens were affected by the border clampdown.

Prime Minister Theresa May faced criticism after initially refusing to condemn Trump's travel ban against majority-Muslim countries during a trip to Turkey on Saturday. May's office later issued a statement saying they do not agree with Trump's approach, but said "immigration policy in the United States is a matter for the government of the United States."

Judges in Massachusetts, Virginia and Washington state joined New York in blocking federal authorities from enforcing the order but lawyers acting for people covered by the order said some authorities had been unwilling to follow the rulings.

Meanwhile, fifteen attorneys general from mostly Democrat states, including California, New York and Washington DC, issued a statement condemning the ban, vowing to fight what they called a "dangerous" and "unconstitutional" order. 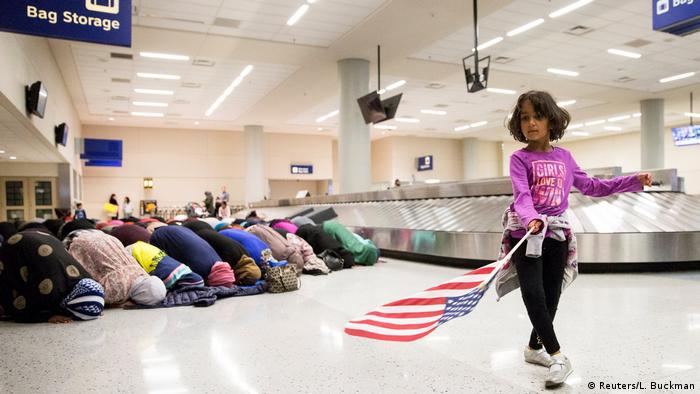 Call for a review

The Chairman of the Senate Foreign Relations  committee, Bob Corker, said Trump's order had been "poorly implemented" and he called for a review: "We all share a desire to protect the American people, but this executive order has been poorly implemented, especially with respect to green card holders."

"The administration should immediately make appropriate revisions, and it is my hope that following a thorough review and implementation of security enhancements that many of these programs will be improved and reinstated," Corker said in a statement on Sunday.

However, an administration official said on Sunday that "nothing had changed."

In a joint statement after the call, the leaders said they had agreed on the importance of strengthening joint efforts to fight the spread of so-called "Islamic State" (IS) militants. The White House statement said the two leaders also agreed on the need to address "Iran's destabilizing regional activities."

President Trump "requested and the King agreed to support safe zones in Syria and Yemen, as well as supporting other ideas to help the many refugees who are displaced by the ongoing conflicts," the statement said.

Travelers from Muslim-majority countries are still being held at US airports after a judge struck down the detentions as unlawful. While much of the world condemns the restrictions, the White House may expand them. (29.01.2017)