Travelers from Muslim-majority countries are still being held at US airports after a judge struck down the detentions as unlawful. While much of the world condemns the restrictions, the White House may expand them. 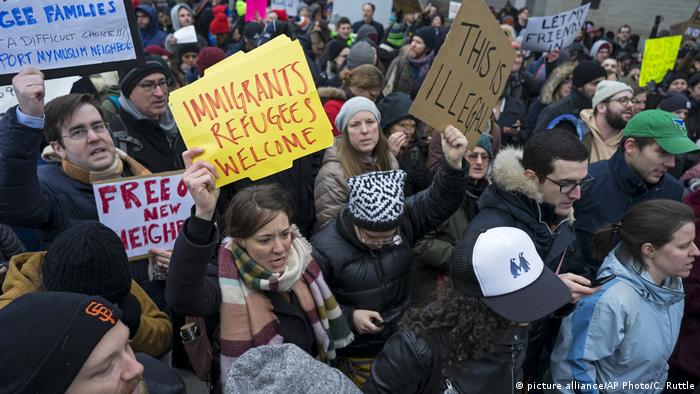 "Our country needs strong borders and extreme vetting," President Donald Trump tweeted on Sunday, the closest thing he has offered to a policy statement since surprising everyone, including the Department of Homeland Security, with an executive order temporarily barring citizens of several Muslim-majority countries from entering the United States.

Trump's chief of staff, Reince Priebus, also doubled down on the ban, which also applies for three months to all refugees, telling US media that "perhaps we need to take it further," in order to keep out "people who want to do bad things to America."

The move was met with near-universal condemnation around the world. German Chancellor Angela Merkel reminded Trump that the US is a signatory to the Geneva Convention, which "requires the international community to take in refugees from war on humanitarian grounds."

"The German government will now examine what consequences the measure of the US government will have for German citizens with double citizenship and will represent their interests, if necessary, before our American partners,” read a statement from Merkel spokesman Steffen Seibert.

New German Foreign Minister Sigmar Gabriel said people should not be stigmatized because of their religion or place of birth.

Canadian Prime Minister Justin Trudeau pledged that any refugees being turned away from the US could find refuge in Canada. "To those fleeing persecution, terror & war, Canadians will welcome you, regardless of your faith. Diversity is our strength," the prime minister wrote on Twitter.

The Executive Order signed by Trump on Friday night banned travel for citizens of Iran, Iraq, Libya, Somalia, Sudan, Syria and Yemen until an even more stringent background checking process could be put in place - despite the fact that no terror attacks on US soil have been carried out by citizens of these countries.

"We are committed to working to ensure that as few people as possible suffer from the chaotic situation that it has created," the statement said.

On Sunday, Iran and Iraq were reportedly mulling a reciprocal ban for Americans traveling to their countries. Iranian Foreign Minister Javad Zarif said Trump's decision was playing into the hands of terrorists who use a narrative of Western hatred of Islam as a primary recruiting tool. The executive order, Zarif said, "will be recorded in history as a great gift to extremists and their supporters."

The US ban also affected a number of green card holders, who had been vetted by authorities prior to receiving permanent residency in the United States, and happened to be traveling outside the country when the ban was put in place.

Thousands of people took to the country's major airports to protest the ban. The international terminal at New York's John F. Kennedy Airport was so full of demonstrators they spilled out into the street and took up every level of the nearby parking garage.

Protests were also taking place on Sunday, notably in Washington in front of the White House and in the city of Boston.

On Saturday night, Brooklyn-based federal Judge Ann Donnelly heard a case filed by the American Civil Liberties Union (ACLU) on behalf of two Iraqi citizens being detained at JFK. Donnelly  granted a stay against the "unlawful detention" of foreigners with valid US visas and residence permits, but the travel ban remained in place.

Judges in other US states also issued rulings restricting the executive order.

According to Priebus, most of the people who were temporarily detained for extra questioning upon arrival at US airports had already been released.

"We've got a couple dozen more that remain and I would suspect that as long as they're not awful people that they will move through before another half a day today," he said.

Although the Department of Homeland Security has pledged to uphold the executive action, not everyone in Washington was happy about the sudden move. Senate Majority Leader Mitch McConnell, a Republican from Kentucky, urged government agencies to "be careful" about implementing the order.

"I also think it's important to remember that some of our best sources in the war against radical Islamic terrorism, are Muslims, both in this country and overseas ... We need to be careful as we do this," the senator said in an interview with broadcaster ABC.

US President Trump's order banning travelers from some majority-Muslim countries from entering the US has taken effect. Politicians, including the German chancellor, and rights groups have voiced concern at the ban. (28.01.2017)