Former US President Barack Obama has criticized the travel ban policy of his successor, Donald Trump. It comes as Washington's attorney general filed a lawsuit against the executive order, labeling it unconstitutional. 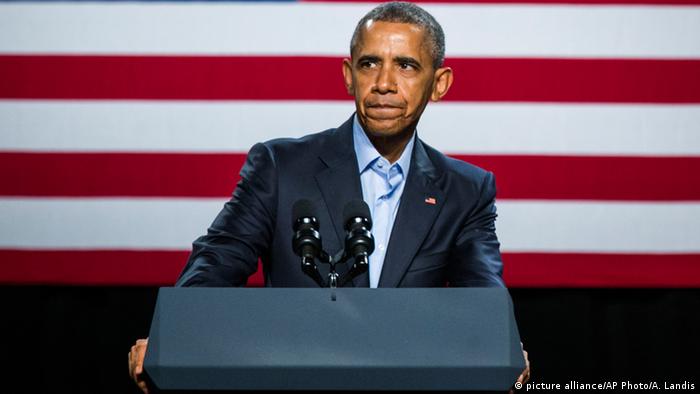 The travel ban on citizens of seven majority-Muslim countries damages US security interests and further divides the country. DW's Michael Knigge writes that President Trump is playing a dangerous game.

The German chancellor has vowed to do "everything" in support of those affected by controversial ban. A German opposition leader has threatened legal action, saying it could head to the European Court of Justice.

Obama "fundamentally disagrees with the notion of discrimination against individuals because of their faith or religion," the former president's spokesman Kevin Lewis said in a statement.

Lewis noted that Obama was "heartened by the level of engagement taking place in communities across the country" after thousands across the US and abroad protested against the executive order.

"Citizens exercising their constitutional right to assemble, organize and have their voices heard by their elected officials is exactly what we expect to see when American values are at stake," he added.

The former president also rejected Trump's claims that his travel ban resembled what Obama did in 2011, when he banned visas for Iraqi refugees for six months.

Obama's statement marks the first of its kind since he left office less than two weeks ago. Since then, hundreds of demonstrations have emerged across the country to protest Trump's executive orders, whether barring refugees from entering the country or building a wall on the US-Mexico border.

"No one is above the law - not even the president," Ferguson told a press briefing. "And in the courtroom, it is not the loudest voice that prevails. It's the constitution."

While at least federal judges have moved to halt deportations, the White House has remained steadfast in its resolution that the travel ban will remain active.

However, Ferguson's complaint argued that the travel ban was separating and harming families "and undermining Washington's sovereign interest in remaining a welcoming place for migrants and refugees."

"Never has our system of checks and balances been more important," said Washington state Governor Jay Inslee at the press conference.

"Until Congress takes this administration to task for the obvious moral and legal injuries suffered by innocent, law-abiding people entering our country, it is up to states to protect and promote the rights of the people who reside in our borders," he added.

Major companies based in Washington, including Microsoft and Amazon, have provided information to Ferguson detailing the impact the ban would have on their business. "We'd be happy to testify further if needed," said a Microsoft spokesman.