The travel ban on citizens of seven majority-Muslim countries damages US security interests and further divides the country. DW's Michael Knigge writes that President Trump is playing a dangerous game. 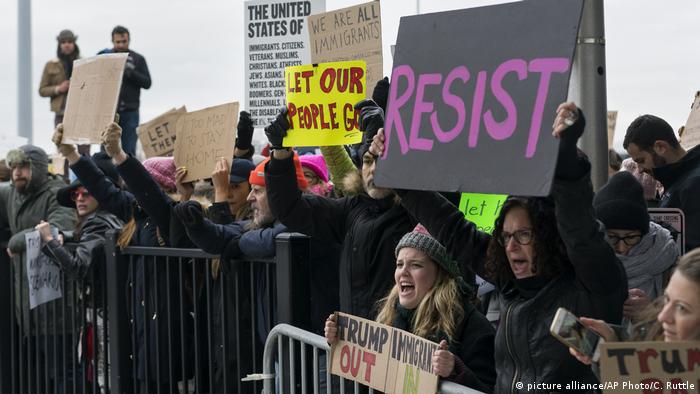 During the US presidential election campaign, Donald Trump scored points by stoking fear on issues related to terrorism, Muslims and immigration. His slogans about "extreme vetting" of people who wished to flee to the United States and a general entry ban on Muslims coming to the USA sparked outrage all around the world. At the same time, however, his radical demands also dictated the political discourse of the election campaign and strengthened his core electorate in their enthusiastic support of him.

With this in mind, it's not surprising that Trump has already started implementing his policies in his first week in office. The building of the promised border wall was part one; the entry ban that has now been imposed on citizens of seven majority-Muslim countries is part two.

However, while the announcement that Trump's wall will be built remains, for the time being, nothing more than an announcement, the entry ban - imposed by an inexpertly prepared presidential decree - has had immediate effects. It resulted in chaos at airports around the world with stranded passengers, helpless airlines, uninformed security personnel and US government agencies contradicting each other.

Michael Knigge reports on the US and transatlantic relations for DW

All right, some sympathetic Trump supporters will admit, the initial implementation may not have been ideal, but the new ruling improves national security, so it's the right thing to do.

But that's exactly what it doesn't do. Because the blanket entry ban on citizens from seven majority Muslim countries is arbitrary, incoherent, and contravenes fundamental American values.

And how is it a counter-terrorism issue for children and the elderly to be detained at airports?

There's nothing wrong, in principle, with a new government choosing to re-examine security measures. But the United States already has a very laborious and intensive vetting program for people wishing to travel to the country, especially from nations that security authorities deem problematic. It's precisely because of this lengthy process that, compared with other countries, the United States has taken in so few refugees. This is why Trump's snap decision is unnecessary and wrong from a security policy point of view.

But it's not only that: The entry ban is also counter-productive. For many Muslims around the world it is confirmation of the message Trump was already sending out from the campaign trail: namely, that they and their religion are not welcome in Trump's America. And this plays right into the hands of Islamist extremists all over the world.

And it's not just many Muslims who are shocked. Both in the United States and elsewhere, friends of a traditional, open America are aghast at the damage the Trump administration has done to the country's reputation after just one week in office, and how, unconcerned by mass protests on an unprecedented scale, it is continuing to split an already deeply divided nation. It is to be feared that this is only the beginning.

There are 1,373 days until the next presidential election.

Bulgaria: Polls close in fourth election in under 2 years 7h ago