Germany, France and the UK are urging North Korea to negotiate with the US. The move comes after North Korea's most recent string of ballistic missile launches. 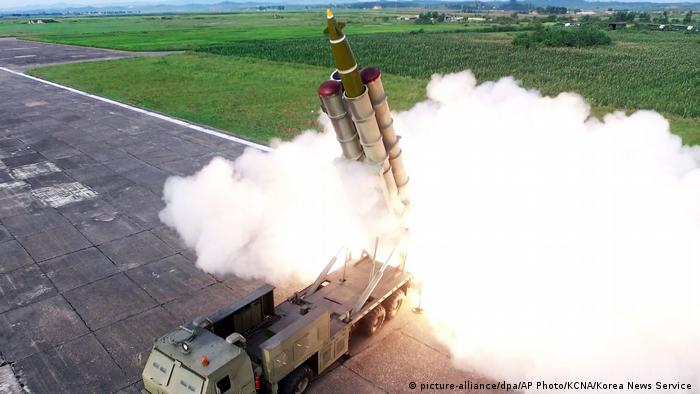 "We reiterate our condemnation of such repeated provocative launches, which are violations of UN Security Council Resolutions," Germany, France and the UK said in a statement issued by Deputy German UN Ambassador Jürgen Schulz.

The statement came after a closed UN Security Council meeting on Tuesday. The trio of countries requested the meeting because of serious apprehensions regarding North Korea's recent spate of missile launches, calling on the country "to engage in meaningful negotiations with the US" as agreed between President Trump and Kim Jong Un at the end of June at their meeting in the Demilitarized Zone between the two Koreas.

The three countries asserted that "international sanctions must remain in place and be fully and strictly enforced until North Korea's nuclear and ballistic missile programs are dismantled."

"Serious efforts by North Korea to reengage diplomatically and make progress on denuclearization are the only way to guarantee security and stability on the Korean peninsula and in the region," their statement said.

North Korea launched a new series of missile tests in recent months, most recently on Saturday, when two missiles were fired from the eastern coast into the sea. A day later, North Korea said that Kim Jong Un supervised the test-firing of a "newly developed super-large multiple rocket launcher."

Pyongyang said its current tests are in response to joint military exercises implemented between the US and South Korea, which have been a source of tension in the past.

The statement from the US allies was at odds with US President Donald Trump's comments downplaying the launches. Negotiations between the US and North Korea have been on hold since the second Trump-Kim summit in Hanoi in February collapsed.

Pyongyang and Washington are trying to relaunch the talks on North Korea's nuclear weapons program and economic sanctions.