Peter Wohlleben's bestselling book claims that trees can talk to one another and have relationships and social structures. A petition started by German academics is now circulating to denounce these "fairy tales." 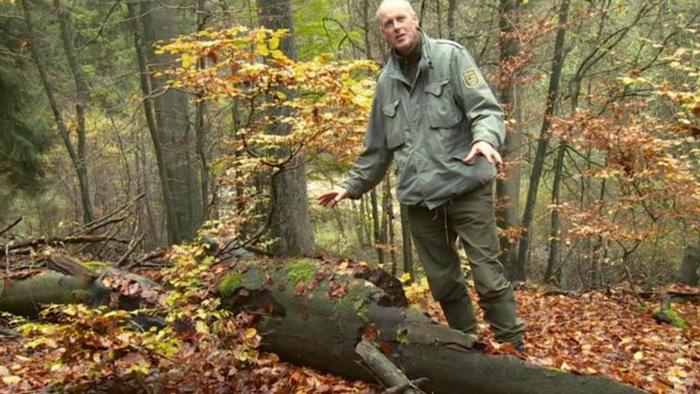 "Trees are very social beings," says German forester Peter Wohlleben, "the parents, the 'mother trees' look after their offspring…they like to stand close together and cuddle." They also talk to each other, have sex, form friendships and feel physical pain, he told the Canadian documentary series "Intelligent Trees."

Wohlleben's bestselling book "The Hidden Life of Trees," caused a stir at Britain's Hay Festival of Literature and the Arts this week. He encouraged the crowd to think of nature in human terms, comparing cutting off branches to "cutting your fingers, it hurts" and culling trees to allow new saplings to grow was like killing human parents to give children more room in the house.

The festival sold out of his book within minutes of his talk, according to The Guardian newspaper.

'Facts instead of fairy tales'

But a growing number of German academics are crying foul - and now two science professors from the Universities of Göttingen and Freiburg have gathered thousands of signatures to protest "the conglomeration of half-truths, biased judgments and wishful thinking…not based on scientific evidence," that Wohlleben is promoting.

"Even in the forest, it's facts we want instead of fairy tales," says Freiburg's head of silviculture, Professor Jürgen Bauhus.

"It's pseudo-science," Bauhus told DW. "It uses selective and biased observations to support the story he wants to tell. There's also a lot of conjecture. He has abandoned good scientific practice."

It's true that Wohlleben employs simplistic language and his evidence is largely anecdotal. For example, he claims that scents given off by African acacia trees are a form of language. Just as humans "use deodorants and perfumes," the acacia trees give off a "warning gas" to others around them when giraffes start to munch on their leaves, causing their neighbors to pump extra toxins into their leaves to avoid a similar fate.

"Similar processes are at work in our forests here at home," the former state forester writes, "beeches, spruces, and oaks all register pain as soon as some creature starts nibbling at them."

What Bauhus and his supporters call "oversimplification," Wohlleben defends as a means to engage an apathetic public in caring about the environment. He told his Hay Festival audience that "the scientific community has had 40 years to explain," why caring for trees is important to no avail, seeming to admit that he was anthropomorphizing plants to push his message.

In that way, Wohlleben carefully treads the line between defending his work as scientifically rigorous and tacitly conceding that his methods are emotionally manipulative allegories (such as calling firewood a "burning corpse"). While some of his claims may seem outlandish, it must be noted that he is far from the first popular science writer to use human comparisons to make their point - indeed, even Jacques Cousteau often used human metaphors to explain the marine environment to his audience.

"But you have to look at how it is received," Bauhus cautioned, "people who want to protect the environment, or who teach classes on conservation sometimes take him too seriously, and real science is demonized for using some of the practices Wohlleben criticizes."

The internet of trees

After graduating from forestry school, Wohlleben was hired as a state forester in Rhineland-Palatinate, but grew disillusioned with what he saw as "brainwashing" by his education and the government. Disavowing techniques such as the use of insecticide and tree-felling, he was later hired to manage the 4,000-year-old beech forest in Hümmel, Germany - where he hopes to wind back the clock to a time before urban development.

Despite being dismissed by other academics as a charlatan, Wohlleben is hardly the only forester to promote the idea of trees having sex lives, families and friendships. Suzanne Simard, a professor at the University of British Columbia, makes similar claims in her work, albeit in more muted tones.

Talking with "Intelligent Trees," Simard explains how her research led her to discover how some trees, sometimes even across species, have interconnected root systems that can share information and resources. Simard compared the process to the internet, a perhaps more scientific approach to what Wohlleben calls a tree's "feelings."

"Some colleagues think it's good that Wohlleben's book is doing so well," Bauhus said, "as long as it is promoting a passion for conservation. But I think it's dangerous."

As meat consumption skyrockets, German writers and philosophers Peter Wohlleben and Richard David Precht insist that animals - and plants - have feelings, too. (22.03.2017)