Treasures of the Black Sea turn into political hostages

Invaluable cultural artifacts from the Crimea are stuck in Amsterdam. Both Ukraine and museums on the peninsula annexed by Russia claim to own them. A Dutch court now has to decide in the diplomatic row. 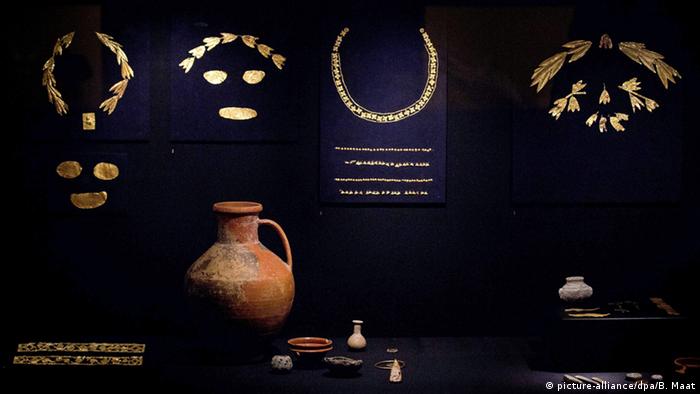 Ukraine and four Crimean museums were in court on Wednesday in a dispute over the ownership of pieces of art.

Ukraine provided 584 exhibits for an exhibition in Amsterdam, called "Crimea - Gold and Mysteries of the Black Sea." The exhibition was held at the Allard Pierson Museum, a small archaeology center, at the beginning of 2014. Since then, most of the artifacts, including invaluable gold jewels worth several million euros, have been stuck in Amsterdam.

Only 19 of those artifacts were returned to the Museum of Historical Treasures of the Kyiv Cave Monastery after the exhibition closed. The remaining ones turned into hostages of international politics. They were loaned by four museums on the Black Sea peninsula of Crimea - before it was annexed by Russia in March 2014.

The Russian Federation wants the exhibits to be returned to the museums located in the cities of Kerch, Bakhchisaraj, Sevastopol and Simferopol. The Ukrainian government believes the cultural treasures should be sent to Kyiv.

The Allard Pierson Museum has involved lawyers and archaeological experts and is keeping the artifacts until the dispute is settled. The director of the museum, Wim Hupperetz, described the ownership row as "a nightmare" for all concerned. 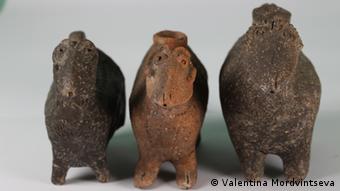 Archaeological objects from the museum in Sevastopol

Disputes surrounding cultural heritage between governments and museums are not uncommon. One of the most famous cases is the "Elgin Marbles," the marble sculptures and fragments that Lord Elgin had taken from the Acropolis of Athens at the beginning of the 19th century and later sold to the British Museum in London. They include parts of the frieze as well as pieces of the east and west gables of the Parthenon.

Greece repeatedly has demanded that Great Britain return them, but London insists it legally owns the Elgin Marbles.

"Usually, such disputes are not settled in court; restitution is achieved through negotiations between museums or through consensus," British museum expert and lecturer at the University of Manchester, Kostas Arvanitis told DW.

Legal, historical and ethical arguments are to be considered in such disputes, the expert explained. Museums are often just a political instrument of governments in these cases; the restitution of cultural treasures is then linked with other domestic and foreign policy goals, according to Arvanitis. 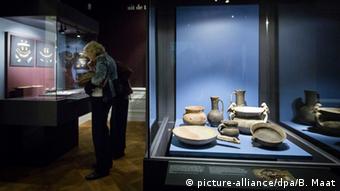 International law does not offer any ready-made answers to the dispute over the Scythian gold. Conventions on the protection of cultural treasures adopted in 1970 and 1995 provide procedures on how to return exhibits stolen from a museum during a war.

According to Arvanitis, there is no established convention determining whether a museum or a state has first ownership of the pieces. It has always been decided on a case-by-case basis.

From Kyiv's point of view, the museums in the Crimea and their exhibits are still Ukrainian property. Since the Netherlands did not recognize the annexation of the Crimea by Russia, they should also share this stand.

However, the Allard Pierson Museum in Amsterdam feels that "returning the exhibits to one of the parties, will immediately lead to protests from the others."

The Ukrainian Minister of Culture, Yevhen Nyshchuk, confirmed this would be the case, having declared that if ever the decision was in favor of the Crimea, Kyiv would immediately sue against it.

His Russian colleague, Vladimir Medinskiy, had previously declared that Moscow was not interfering in the dispute because it was "a process between the museums in the Crimea and the other side." However, Medinskiy added, a judgment in favor of Ukraine would be a "terrible precedent."

Ukrainians have transformed a statue of Soviet founder Vladimir Lenin into one of Darth Vader in the city of Odessa. The absurd but highly-symbolic move comes just before the release of the latest "Star Wars" movie. (23.10.2015)

Tight restrictions on freedom of art in Russia

With political turmoil in the background, Russia's culture is being increasingly controlled by the state. The blows to artistic freedom are striking. (28.04.2015)