Traveling to Europe during the summer? Consider this | Business | Economy and finance news from a German perspective | DW | 17.06.2022

Traveling to Europe during the summer? Consider this 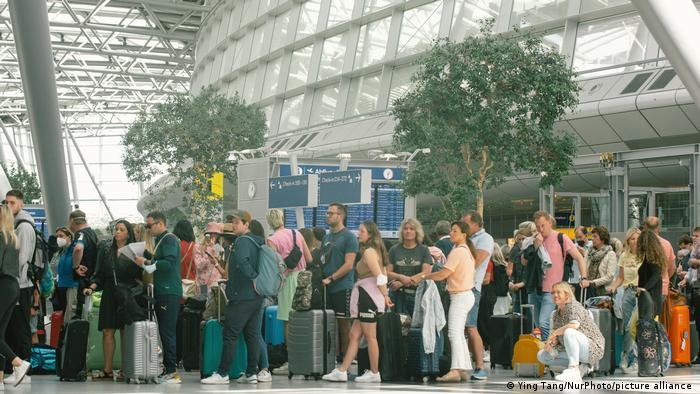 European airports are once again inundated with travelers. This is even before summer holidays have begun in many countries.

With most of the pandemic-related restrictions lifted, people are setting off for their dream destinations, eager to make up for lost travel opportunities over the past two years — a phenomenon that is being described as "revenge travel."

The surge in demand represents a massive turnaround in fortune for the aviation industry which was among the worst hit by the coronavirus-induced lockdowns, losing more than $230 billion (€219 billion) in 2020 with airlines accounting for the bulk of it.

However, the quick rebound has also resulted in fresh headaches for the beleaguered industry, which, taken aback by the swift recovery, is struggling to put together enough staff to deal with the influx of travelers at airports.

Staff shortages and bottlenecks at airports have led to long queues and waiting times for passengers at major European hubs like Frankfurt, Dublin and Amsterdam and hundreds of flight cancellations, threatening to take the shine off the industry's recovery.

"With governments making U-turns and policy changes there was uncertainty until the last minute, leaving little time to restart an industry that was largely dormant for two years," Willie Walsh, head of the International Air Transport Association (IATA), said in a statement.

Total demand for air travel in April as measured by revenue passenger kilometers or RPKs — which counts the number of kilometers traveled by paying passengers — soared nearly 80% compared to April 2021, driven by a jump in international travel, the IATA said. It added that the demand on several routes, including Europe/Central America and Middle East/North America, was above pre-pandemic levels.

"People by now have confidence that they will have the classical city experience with restaurants, entertainment, etc. without having to worry about COVID-19 restrictions," Axel Hefer, managing director and chief executive officer of booking platform Trivago, told DW.

The high demand coupled with elevated jet fuel prices and fewer planes in the sky as many of the aircraft grounded during the pandemic remain idle has pushed up airfares. But that doesn't seem to be deterring people with wanderlust and forced savings from the pandemic era from making trips.

"After a long period of abstinence, vacations are at the very top of the Germans' wish list this year — even rising energy costs and increasing inflation cannot affect this desire," Norbert Fiebig, president of the German Travel Association (DRV), told DW. Fiebig said, on the contrary, people were spending more on holidays this year "booking longer vacations and choosing higher quality." 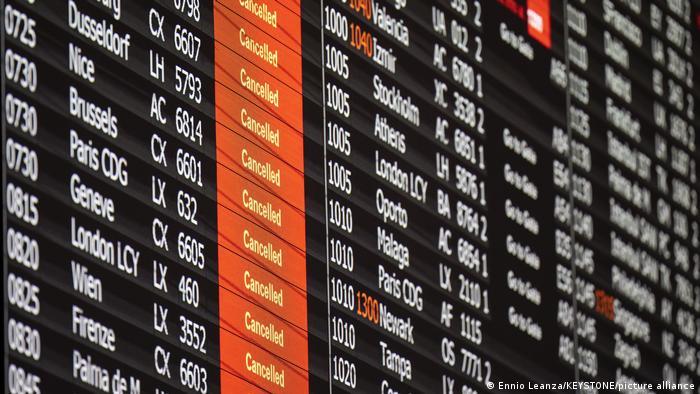 Airlines struggling to capitalize on the rush

The roaring comeback was meant to be good news for airlines, which have bled billions of euros in cash over the past two years and were eagerly waiting for this moment. But overwhelmed airports have come as a dampener.

"It is foreseeable that the flight schedules will not be able to be flown as hoped due to the bottlenecks," a Lufthansa spokesperson told DW. "Therefore, we have had to preemptively cancel flights to relieve the system and fly our guests to their destination on time or to enable connecting flights."

Other airlines, including Lufthansa rival Air France-KLM and discount carrier Wizz Air, have also been hit by the staffing crunch at airports, where peak demand is nearing on volumes experienced pre-COVID-19.

The aviation industry is struggling to recruit workers after it was forced to downsize its workforce during the pandemic; their plight made worse by the post-pandemic trend of people becoming extremely picky when it comes to jobs, shunning roles with poor working conditions and low wages.

"The German labor market continues to be very tight. Jobseekers can choose from a large number of vacancies, while employers have difficulties filling up open positions," a spokesperson for Frankfurt Airport operator Fraport told DW. "Moreover, the recruitment process at airports is specifically complex and time-consuming. This is due to the fact that many operational activities in aviation take place in security-relevant and restricted areas."

Deutsche Flugsicherung (DFS), the German air navigation service provider, says while it managed to retain its staff during the pandemic thanks to support from the German government, it wasn't able to train the numbers of staff it would have liked to due to the pandemic restrictions.

"Staff scheduling is not only proving to be very challenging, but it is also reaching the limits of what is possible," Fabio Ramos, DFS spokesperson, told DW.

The situation in Germany has also been affected by the launch of a new air traffic control system by the French air navigation service provider which has resulted in additional, unplanned traffic being shifted to the country, Ramos said.

"The closure of airspace in Russia and Ukraine is also shifting traffic to Germany. In addition, the war in Ukraine is causing considerably more military air traffic in Germany," he added.

Given disruptions at airports, travelers are being recommended to arrive at the airport 2 to 2.5 hours even before their domestic flight, preferably check in online and make sure their cabin bags are packed right to help avoid delays at the security checkpoints.

"The latter in particular has an enormous effect, as we are still finding that process times and therefore waiting times at the checkpoint are significantly longer because numerous unauthorized items are carried, liquids are not separated or disposed of until the checkpoint itself, and other regulations are not complied with," Swedish security services group Securitas, which provides screening services at airports, told DW.

Despite the bottlenecks and staff shortages, the industry expects to cash in on the "revenge travel" wave. But travelers must brace for inconveniences.

"There's a significant number of trips that are just necessary because you otherwise would go crazy, or your kids go crazy, or both," Trivago's Hefer said. "Travelers' expectations are high that this will be the best summer ever, but labor shortages might lead to them not necessarily getting the experience they've been dreaming of."

Tourism is bouncing back

Why Africa is home to the world's 'worst airports'