Tourism: Boon or threat for the Galapagos? | Environment | All topics from climate change to conservation | DW | 06.01.2017

Tourism: Boon or threat for the Galapagos?

The Galapagos Islands are treasure trove of wildlife found nowhere else in the world. But are tourists wanting to experience it up close protecting or endangering this unique biodiversity?

It's only 8:00 a.m., and already hot and humid. The cruise ship Silver Galapagos, with 100 passengers on board, is anchored in Great Darwin Bay, which looks like a bite chomped out of Genovesa Island.

In fact, it's in the crater of an extinct volcano. The island, far off the coast of Ecuador in the Pacific Ocean, is part of an archipelago created millions of year ago by plumes of molten rock from underwater volcanoes.

Genovesa was named after Genoa, the Italian hometown of explorer Cristobal Colon - known as Christopher Columbus in English. But the islands are commonly closely associated with another figure whose discoveries were a historical landmark. The unique biodiversity of the Galapagos famously inspired Charles Darwin's theory of natural selection.

Nearly two centuries later, the islands' flora and fauna are still taking visitors' breath away. Genovesa boasts "the biggest red-footed booby rookery in the world - about 120,000 birds nest here," scientist and tour guide Yvonne Mortola says. "The birds have no fear at all, because they have no natural enemies." 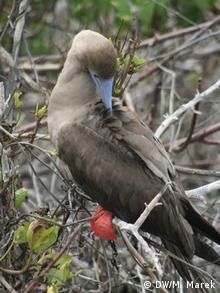 This fearlessness, common to much of the wildlife here, was noted as far back as 1535, when a ship carrying a Spanish bishop to Peru drifted off course - and its passengers and crew became the first Europeans to set eyes on the archipelago.

For tourists, it's a thrill to get so close to such impressive creatures in their natural habitat. Frigatebirds flutter down as if to show off in front of the guests. Huge iguanas and sea lions soak up the sun, completely oblivious to the humans walking right past them.

But this failure to recognize a potential threat in talking, tool-making, weapon-swinging bipeds proved fatal for some Galapagos species.

For centuries, the islands were used as a stopover for European ships - particularly those carrying whalers, or English pirates hiding out between raids on Spanish galleons. And after long weeks at sea, these crews were hungry.

The endemic giant tortoise was particularly sought-after. Taken aboard, the lumbering reptiles were used as a living meat larder.

Their numbers fell from around 250,000 in the 16th century to a low of around 3,000 in the 1970s. Today, as a result of conservation and restoration efforts, around 20,000 giant tortoises live on the Galapagos. Despite centuries of being hunted, they are still breezily unconcerned by people.

Are tourists a threat?

These days, visitors come to marvel at the wildlife, and not eat it. Yet conservationists are keenly aware of the risks they pose to the islands' unique flora and fauna.

In 2015, some 224,000 tourists visited the Galapagos Islands. Despite the high price tag on such an exclusive holiday, ever more visitors come each year. 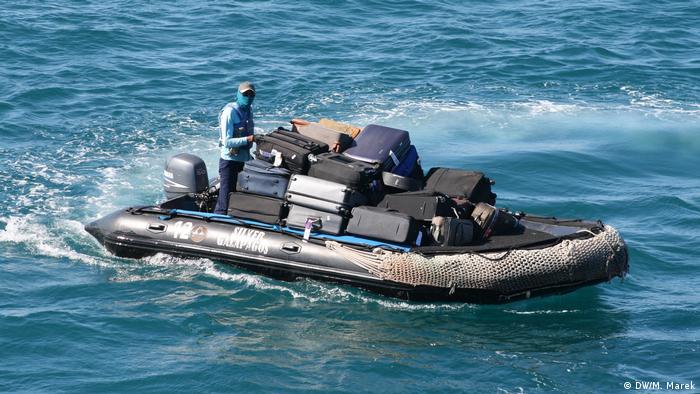 One concern is that the presence of humans could change animals' natural behavior. Scientists fear that if tourists wander between Galapagos penguins and their young, for example, they might put the animals under stress and prevent them from parenting properly.

But a much greater threat is the unwitting introduction of foreign species to the islands' isolated ecosystems. A seed or spore attached to clothing could launch an invasion threatening endemic species with extinction.

"Often, it's parasites, germs, or invasive species of fauna or flora that get here in the ballast water of ships or in the luggage of tourists," says Axel Krumsiek, project manager for marine ecosystems at WWF Germany.

"A species of parasitic fly that's exotic to the islands was unintentionally introduced," he explains by way for example. "Its larvae suck the blood of fledgling finches - resulting in malformations and higher mortality." The Galapagos mangrove finch is now at risk of extinction. 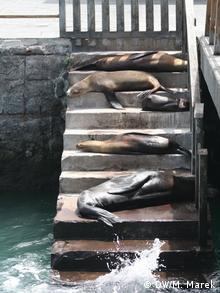 Not only are the ainmals unfraid of people - they even find uses for human artifacts, like these sea steps on San Cristóbal Island

Ecosystem contamination is one of the main reasons the Ecuadorian National Park Agency has tightened regulations governing access to the islands in recent years.

The Galapagos Islands got their national park status in 1959, and in 1978 were declared a UNESCO World Heritage Site. Tourism has been the foundation of the islands' economy ever since. Yet in 2007, the archipelago was put on the red list of threatened World Heritage Sites, at risk of losing the designation.

The Ecuadorian government responded by tightening regulations for island residents and for tourists, in a bid to protect its ecosystems. In 2010, UNESCO took the park off the red list. At the same time, however, restrictions on visitor numbers were lifted.

The government does limit the size and routes of cruise ships, along with how often they can stop at the islands. Tourists can only visit with a certified guide, and must not stray from designated paths. Bringing food, or touching wildlife, is forbidden.

Fernando Ortiz knows the 123 islands of the Galapagos archipelago better than almost anyone. He was head of the park's marine resources unit for several years. Now working as a guide, he makes sure tourists respect the rules.

"For at least 5 million years, the plants and animals of the archipelago evolved here almost undisturbed," Ortiz says, and tells the tourists they should take nothing away and leave nothing behind. 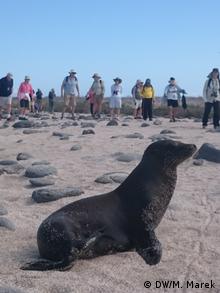 He says the economic as well as scientific and ecological value of the islands mean there is plenty of incentive to keep them safe.

"Galapagos is a $550-million-a-year business. The Ecuadorian government, but also many of the local residents are well aware of this, and they want the islands' nature conserved."

About 80 cruise ships are registered with the national parks agency for landing permits. Only small, shallow-draft boats with up to 100 passengers are allowed. Until 2012, cruise ships were allowed to call on the main islands as often as they liked. Now, any one ship can visit a maximum of once every two weeks.

As is the case for many of the world's natural wonders, the Galapagos faces another threat that could easily dwarf the potential impact of tourists.

Scientist and guide Mortola is more worried about the impacts of climate change and climate events like El Nino, citing studies showing that the sardine population has declined year after year. That, in turn, has meant fewer blue-footed boobies, which depend of the fish for food.

Krumsiek has similar concerns and points out the Galapagos penguin could also be at risk. Research showed that the El Nino year in 1997 was correlated with a penguin mortality rate of up to 77 percent. "Over a certain sea surface temperature, they stop breeding because of reduction in availability of nourishment."

Krumsiek cautions that there is much uncertainty and imprecision in such population data. But with El Nino impacts being seen more strongly around the world, it's a worry.

World Turtle Day 2016: A big cheer for an endangered species

Happy World Turtle Day! The sad fact is turtles and tortoises are endangered, so get to know about them and meet some of the world's most famous specimens. (23.05.2016)

Tortoise meets tourist on the Galápagos

Since Spanish sailors first reached its shores in 1535, humans have posed a threat to the unique wildlife of the Galápagos Islands. But today, careful conservation management has replaced careless exploitation. (06.01.2017)