One week after a massive volcanic eruption, Tonga is in the midst of a massive cleanup operation. Contaminated water resources have led to a shortage of drinking water supplies and debris is damaging aid ships at sea. 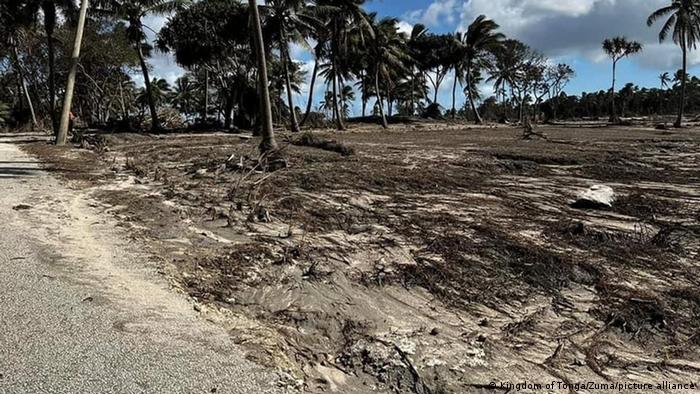 Tongans are facing a shortage of food and drinking water supplies, while communication remains an "acute" challenge, Tonga's prime minister said in a statement on Saturday.

It was the second update released by the government on the damage caused by the eruption of the Hunga Tonga Hunga Ha'apai undersea volcano last week. The eruption blanketed the Pacific island nation with ash and triggered a tsunami that destroyed homes on some of its outer islands.

The Tongan government said the powerful volcanic eruption and its after-effects had affected nearly 84% of its population.

Tonga has a population of around 105,000 people, including those living in the outer islands.

What is the latest on the damage?

The government said that securing drinking water was a priority for its residents since volcanic ash had contaminated the archipelago's drinking water supply.

But aid deliveries arriving at sea are facing significant challenges, since the volcanic fallout on the ocean surface is also damaging ships.

"Although there has been no further volcanic activity, challenges to sea transportation remain as fallout on the surface of the ocean is causing damage to vessels," the government said.

This means it could become harder to transport people from smaller islands to the main island, Tongatapu, as the government promised to do.

So far, 62 people had been relocated from Mango island to Nomuka island, located in the southern part of the Ha'apai group, after residents lost their homes and personal belongings. A field hospital had also been set up in Nomuka.

Another factor complicating relief efforts was disrupted digital and telecom communication, since satellite and radio links were limited after undersea cables snapped. The New Zealand government said earlier this week that full restoration of telecom links could take up to a month.

Tongans queued up Saturday to access limited money services that were restored in the capital, as rescue and restoration efforts continue.

The government also said that the death toll remained unchanged at three after two Tongans and a British national were confirmed to have died as a result of the eruption and tsunami earlier this week.

The UN office coordinating Tonga's humanitarian efforts said Friday it was determined to make sure aid supplies to the nation would not bring with it any COVID-19 infections, planning instead a range of "no-contact" delivery options.