New Zealand and Australia said Monday they were able to send surveillance planes to assess the damage caused by the Hunga-Tonga-Hunga-Ha'apai underwater volcano that erupted off the coast of Tonga on Saturday evening,

There has yet to be information released on what the aircraft were able to observe. The thick ash cloud 63,000 feet (19,000 meters) above Tonga had previously prevented military surveillance flights. The roar from the eruption was reportedly heard 10,000 kilometers (6,000 miles) away in Alaska.

After a tsunami triggered by the eruption that hit the Pacific island, officials downgraded the threat of further tsunamis on Sunday.

At least one person on Tonga — a British woman who ran a dog shelter — is reported to have died in the tsunami wave. Her brother said she had been killed while trying to rescue her dogs.

In an update Monday, the UN Office for the Coordination of Humanitarian Affairs (OCHA) said a distress signal was detected in a isolated, low-laying island group in the Tonga archipelago.

The OCHA said there was "particular concern" about two the small low-lying islands, Fonoi and Mango, where the beacon was detected.

According to the Tonga government figures reported by Reuters news agency, 36 people live on Mango and 69 on Fonoi.

A volcano near Tonga erupted in the Pacific on Saturday, triggering a tsunami

Australia's Minister for the Pacific Zed Seselja said initial reports suggested no mass casualties from the eruption. However, a contingent of Australian police stationed on the island reported they had observed beaches and reported significant damage with "houses thrown around."

Tonga's deputy head of mission in Australia, Curtis Tu'ihalangingie, said the flights were expected to return on Monday evening. 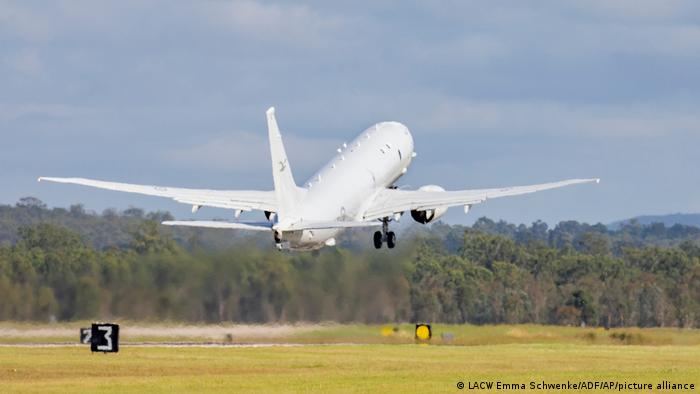 Tonga is concerned about the risk of COVID-19 reaching the island through aid deliveries, as it is currently COVID-free.

"We don't want to bring in another wave — a tsunami of COVID-19," Tu'ihalangingie told Reuters.

Tu'ihalangingie added that it is likely that foreign personnel would not be allowed to disembark aircraft and any aid delivered would need to be quarantined.

Officials were also worried about the fate of some of the many isolated, low-lying islands nearby, especially after a distress signal was detected on one.

A full assessment was not possible as of Monday, as the eruption knocked out the internet and disrupted communication with the island. Tonga receives its internet via an undersea cable from Fiji.

The company that owns the fiber-optic cable that connects Tonga to the rest of the world said it likely was severed in the eruption and repairs could take weeks, the Associated Press reported.

"The tsunami has had a significant impact on the foreshore on the northern side of Nuku'alofa with boats and large boulders washed ashore," she said after managing to contact the New Zealand embassy in Tonga.

"Nuku'alofa is covered in a thick film of volcanic dust but otherwise conditions are calm and stable," the prime minister added.

'One of the most explosive eruptions in the 21st century'

Experts expressed concern about the sheer size of the eruption and are on the lookout for potentially further volcanic activity.

"It was a remarkable eruption. It was extremely explosive. We're sort of thinking it's one of the most explosive eruptions in the 21st century at the moment,"  Shane Cronin, professor of volcanology at the University of Auckland in New Zealand, told DW.

"These very large ones at this volcano happen about once every 900 years, but they seem to have a series of events, and so this may be the first in a series of eruptions," he added.

In terms of damage, the expert said the main concerns at the moment are about how hard the tsunami hit, as well as the level of ash that has fallen on the island.

"What we're concerned about is some of the low-lying islands, which are actually very close to Hunga-Ha'apai - Nomuka and the islands of the Ha'apai group. These islands have potentially a lot of low-lying areas that were affected by tsunami waves," he added.

"At the moment, the ashfall that has gone on to Tongatapu hasn't been that large yet, but the eruption column actually spread in a way that it probably would have [and possibly still will] put more ash onto the central part of the Tongan island group," the volcanologist said.

"What we're waiting to find out now is that what kinds of impacts there have been, what kind of help people need."

Besides New Zealand, other countries have expressed concern for Tonga and offered help.

An Australian government spokesperson said initial assessments were still underway, but the country was ready to provide support to Tonga if requested.

US Secretary of State Antony Blinken also expressed concern, adding that the US "stands prepared to provide support to our Pacific neighbors."

The lack of COVID-19 outbreaks on the island of 105,000, is another element for international aid efforts to take into account.

New Zealand has assured that its military staff was all fully vaccinated and willing to follow any protocols established by the island nation.

The tsunami threat around the Pacific basin from the powerful underwater volcano eruption off the coast of Tonga began to recede on Sunday, the Pacific Tsunami Warning Center said.

Authorities at "impacted coastal areas should monitor... to determine when it is safe to resume normal activities," the center said.

The seismic force sent powerful waves crashing into coastlines from Japan to the United States.

The US National Weather Service in American Samoa canceled its tsunami advisory on Monday, but officials urged caution when entering the water.

In Peru, two women died in Lambayeque due to "anomalous waves." 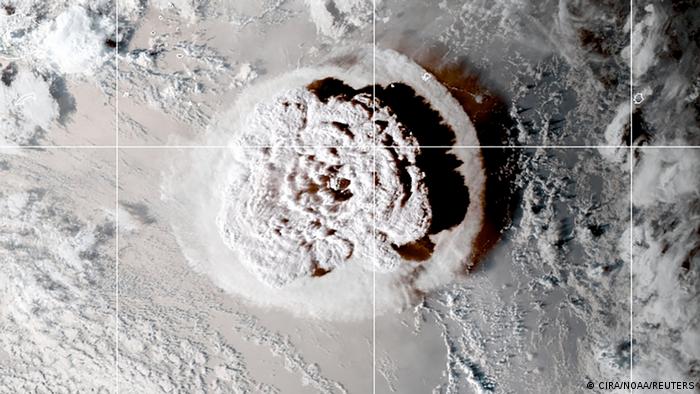 A volcanic eruption in Tonga has sent tsunami waves that have hit coastlines as far as Japan and New Zealand and flooded the Tongan capital of Nuku'alofa.