It was the first shipment of relief supplies to arrive in Tonga after Saturday's eruption of the Hunga Tonga Hunga Ha'apai underwater volcano. The eruption dispersed a thick layer of ash across the island and caused a tsunami that was felt across the Pacific.

The underwater cable providing internet and telecoms connectivity was severed in the disaster. It may take weeks for the cable to be repaired. At first, satellite phones were the only means of communication. However, the owner of the island's cable said that phone links were being restored late on Wednesday, albeit adding that reconnecting to the internet could still take weeks.

Officials in Australia and New Zealand said two large military transporters touched down at Tonga's main airport after its runway had been cleared of ash, making it safe to land.

The Australian High Commission in Tonga said earlier that Australia had provided 1 million Australian dollars (€638,000, $724,000) to the recovery effort.

The first of two New Zealand Navy ships also arrived on Thursday, its High Commission said. The second one was expected to arrive on Friday.

The delivery of supplies was contactless, according to officials. Tonga is COVID-free and is worried that the virus could spread to the island along with aid deliveries.

Vaccine access is already widespread but not universal in Tonga.

The Australian military relief ship the HMAS Adelaide is also standing by in Brisbane and is expected to depart for Tonga on Friday. 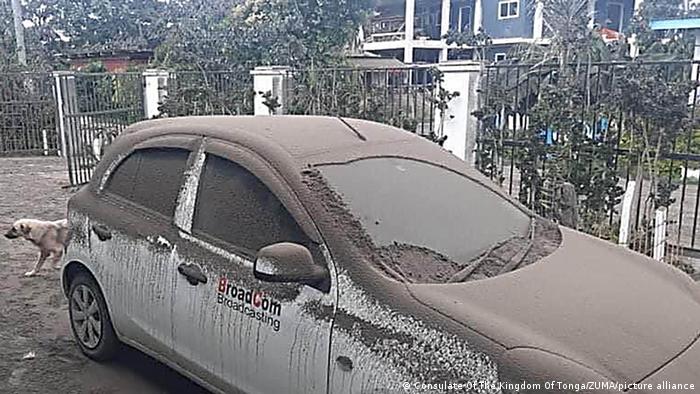 Japan said on Thursday it would send aid, including drinking water and equipment for cleaning volcanic ash. The aid will be sent through the Japan International Cooperation Agency.

Katie Greenwood, Pacific head of the International Federation of the Red Cross and Red Crescent Society, told DW that "there's mixed news coming out of Tonga."

"It is very good news we have been able to finally make contact with our team," Greenwood said. She added that they hadn't been in contact since Saturday when the eruption took place.

"There's also some sad news […] that has come out of some reconnaissance trips that have gone out to some of those smaller, low-lying atolls," Greenwood told DW.

Greenwood said that the reconnaissance trips had found that "most of the structures on those islands have been completely wiped out and destroyed."

"The death toll did rise slightly yesterday as well," to three, she added.

Local journalist Marian Kupu told Reuters that Tongans feared they may run out of drinking water.

"Each home has their own tanks of water supply but most of them are filled with dust so it's not safe for drinking," Kupu said.

The United Nations said that about 84,000 people, or more than 80% of Tonga's population, had been badly affected by the disaster.

"They have been affected through loss of houses, loss of communication, what we understand is the issue with the water," UN spokesman Stephane Dujarric told reporters.