Tonga eruption: Communications could be down for '4 weeks'

It could take more than a month to fix a vital communication link to the island following Saturday's massive volcanic eruption, officials have said. Tonga is also racing to clear ash to make way for aid-bearing flights. 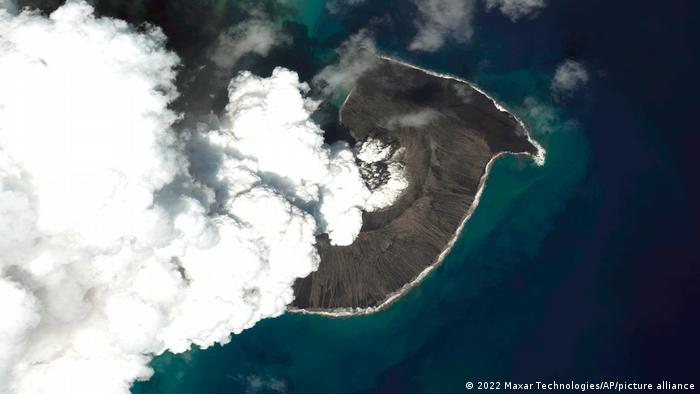 Support for Tonga has been hampered by cut communications, an ash-covered runway, and the threat of a coronavirus outbreak

An underwater cable that provides the Pacific island nation of Tonga with most of its telecommunication links with the rest of the world will need at least a month to be repaired following the recent volcanic eruption, the New Zealand government said on Wednesday.

The Hunga Tonga Hunga Ha'apai underwater volcano erupted on Saturday dispersing a thick layer of ash across large parts of the island nation and causing a destructive tsunami that was felt as far away as Peru, Chile and the United States.

Communications in unknown state of disrepair

The cable is broken in two places and will require extensive repairs.

"US cable company SubCom advises it will take at least four weeks for Tonga's cable connection to be repaired," the New Zealand government said.

Samiuela Fonua, chairman of the cable-owning company Tonga Cable Ltd, said that a repair vessel will leave Port Moresby in Papua New Guinea at the weekend and travel for eight or nine days to Samoa to pick up equipment.

From there it will head to the eruption area where the cable is ruptured.

"The cables are actually around the volcanic zone. We don't know ... whether they are intact or blown away or stuck somewhere underwater. We don't know if it's buried even deeper," he told Reuters, adding that it could take longer than a month.

International mobile phone network operator Digicel said it had set up an interim connection via satellite, but this would be "limited and patchy, covering about 10% of usual capacity."

The eruption and resulting tsunami impacted areas across the Pacific

However, the lack of digital and telecom communications is not the only problem facing Tonga.

An aircraft laden with water, generators and hygiene kits is ready to fly from New Zealand, but cannot take off until the runway at the main island's international airport is cleared of a thick layer of volcanic ash. Australia also has aircraft ready to fly.

The UN Office for the Coordination of Humanitarian Affairs (OCHA) said that a blanket of ash 5 to 10 centimeters (2 to 4 inches) thick had accumulated on the runway.

This can prove dangerous to modern aircraft as the ash can gather inside the engines. "The ash has proven more difficult to clear than was expected," said Jonathan Veitch, Fiji-based UN coordinator on the crisis.

It is expected that the runway will be cleared later on Wednesday.

Aid missions on their way

New Zealand also dispatched two military ships on Tuesday that are expected to arrive on Friday.

The HMNZS Aotearoa is carrying bulk water supplies as well as a desalination plant capable of processing 70,000 liters of water a day. Survey and diving teams are also on their way onboard the HMNZS Wellington.

Another ship from Australia is also planning to set sail soon.

Coronavirus is yet another complication for the island, as Tonga is one of the few countries that has not recorded any COVID outbreaks, prompting fears about the importation of infections from outside aid.

Tonga confirmed on Tuesday that three people were killed in the tsunami with multiple other people suffering injuries.

A village on one of the many islands was almost completely wiped out, the government said, with only a few buildings left standing.

Many other villages across the archipelago had also suffered severe damage. Tongan rescue teams were sent to the worst-hit areas.

In its first public declaration since the eruption, the government called it "an unprecedented disaster."