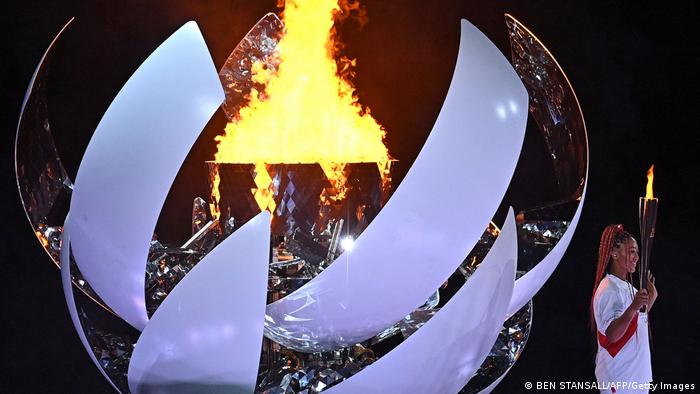 The ceremony began with a fireworks display in the Tokyo 2020 colors and choreography that featured several nods to the pandemic and the challenges faced by athletes over the past year.

For the first time, a moment of silence was held in memory of the 11 Israeli Olympic team members killed by Palestinian gunmen at the 1972 Munich Games.

Attended by just a few hundred dignitaries — including Japanese Emperor Naruhito — and the media, the ceremony struck a largely somber tone. Occasionally, protesters could be heard outside the stadium. Many in Japan remain unhappy about the Games taking place.

A far smaller number of athletes than usual took part in the Parade of Nations, in a bid to reduce the risk of coronavirus infections, walking out to music from well-known Japanese video games. Some did their best to liven up the near-empty stadium, waving to fans who weren't there and dancing.

The ceremony wound down with a rendition of  John Lennon's "Imagine," while nearly 2,000 drones illuminated the sky above the stadium in the shape of a revolving globe.

"Today is a moment of hope," said IOC President Thomas Bach in his speech. "Yes, it is very different from what all of us imagined. But finally, we are all here together."

After that, it was left to Emperor Naruhito to declare the Games officially open. And then finally, the Olympic flame was lit by Japanese tennis star Naomi Osaka. Now it will be the athletes' turn to light up these Games. 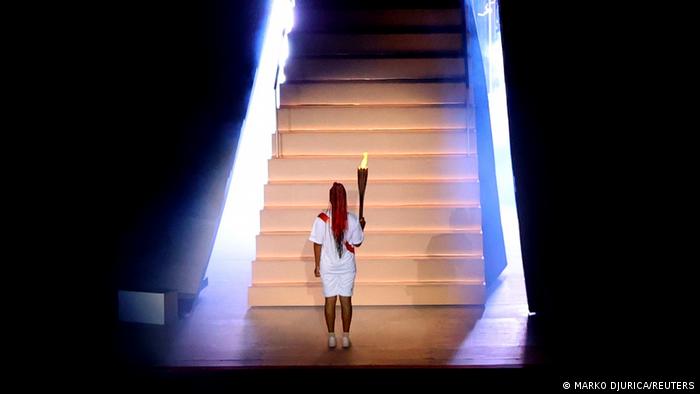 Naomi Osaka with the Olympic torch. 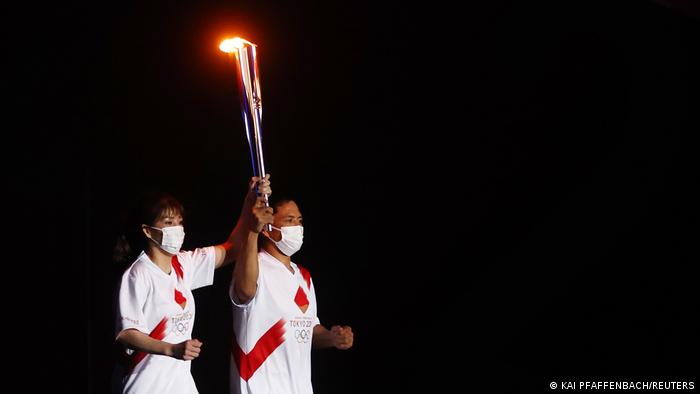 Germany's hockey captain will be allowed to display rainbow colors in support of the LGBTQ community at Tokyo 2020. Her case has put the IOC's rules under the spotlight, with some criticizing a lack of clarity.

The Olympic flag is entering the stadium. It will be handed over to local essential workers battling COVID-19. 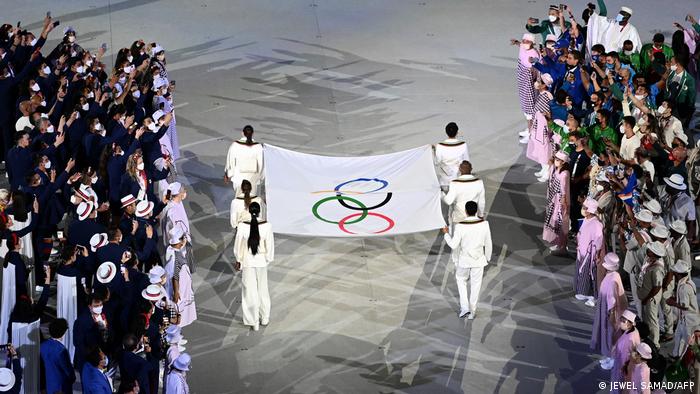 IOC president Thomas Bach: "The pandemic forced us apart, to stay away from our loved ones... Today, all over the world, we are sharing this moment together." 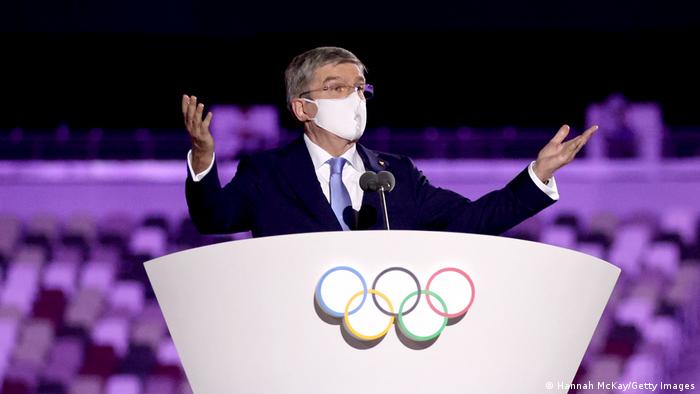 More footage from the protests taking place outside the stadium in Tokyo.

It's almost time for the torch!

We should be used to it after 15 months into the pandemic, but an empty stadium is still a sad sight. 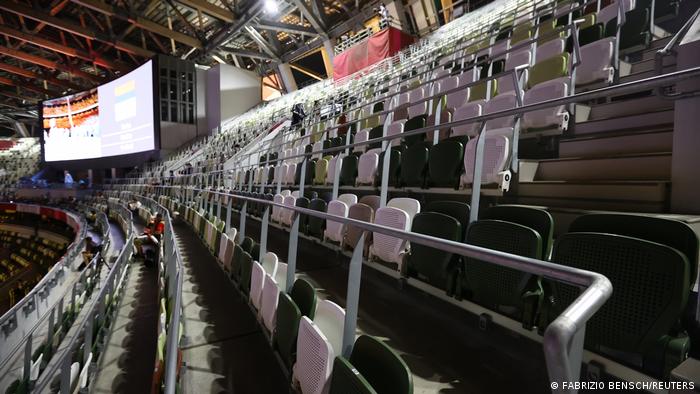 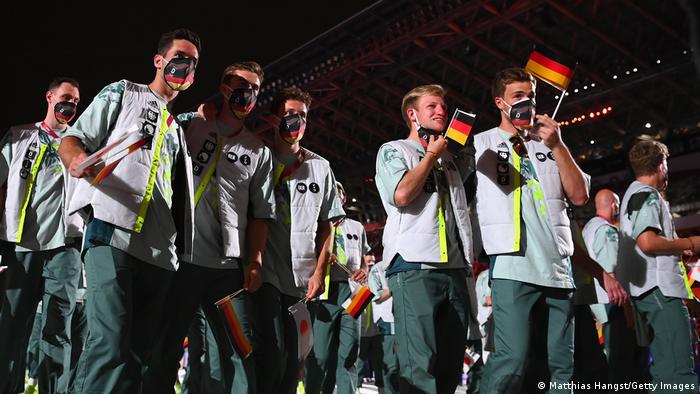 How about a reference to the previous Olympics held in Japan?

At long last, the Germany delegation is entering the stadium in Toyko!

The Germany team includes 430 athletes which will compete in 41 different sports.

Russia may have been banned from the Olympic Games due to the doping scandal, but Russian athletes are still being allowed to compete under the banner of the Russian Olympic Committee. Many users have been criticizing the IOC on social media for allowing Russian athletes to take part.

An update from DW's Oliver Moody regarding the protests outside the stadium in Toyko. 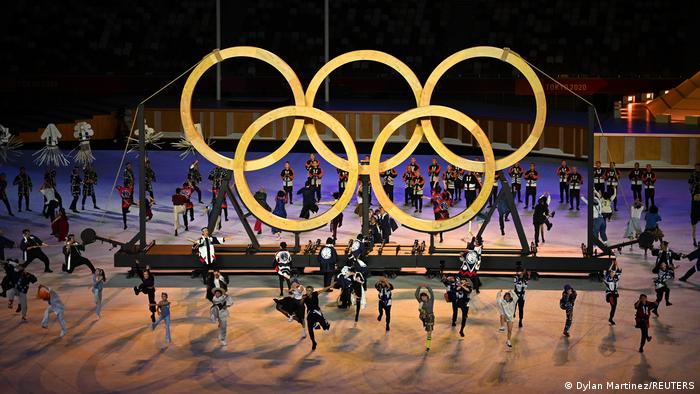 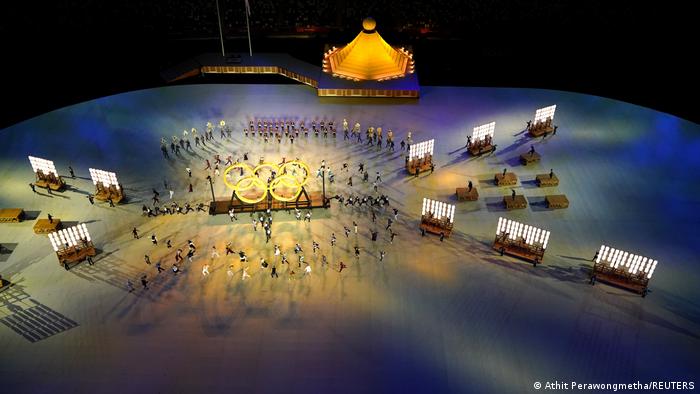 Fair to say the Argentina delegation aren't lacking any motivation for the Olympics.

The March of Nations is underway! As the opening ceremony continues, protests against the IOC and the Games are taking place outside the stadium in Tokyo, DW's Oliver Moody reports.

The ceremony starts with a moment of silence in memory of the athletes who lost their lives at the Games, with a focus on the eleven Israeli sportspeople who were killed in a terrorist attack during the 1972 Munich Games, as well as COVID-19 victims worldwide.

The opening ceremony of the 2020 Olympics is a go! Tokyo 2020 promises to be an Olympics full of political protests. Here’s everything you need to know about the International Olympic Committee (IOC)’s guidelines.
13:00

For the first time, two flag bearers, one man, one woman, will carry the German flag in the March of Nations at the Olympic Games. Leading the Germany team: Laura Ludwig and Patrick Hausding.

Hello, and welcome to DW's live blog from the opening ceremony of the 2020 Olympics!

While the public mood is mixed, the Olympic Games in Tokyo have some die-hard supporters: around 70,000 volunteers who remained even after a wave of volunteers quit over pandemic concerns and gaffes by organizers.