Germany's hockey captain will be allowed to display rainbow colours in support of the LGBTQ community at Tokyo 2020. Her case has put the IOC's rules under the spotlight, with some criticizing a lack of clarity. 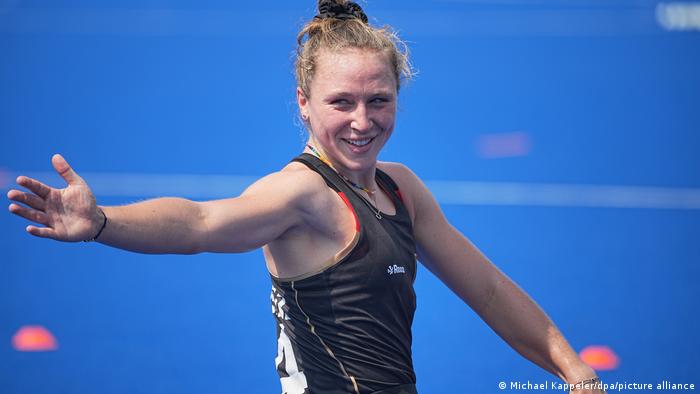 Nike Lorenz is in many ways the epitome of the modern athlete. Successful in her sport, she also wants to use her platform for good.

"Behind us athletes are real humans and we do have political opinions," she told DW from the Olympic Village. "While doing sport we deserve to be the humans that we are."

When Germany's hockey captain lines up against Great Britain in her country's opening match at the Tokyo Olympics on Sunday, she will do so wearing the same rainbow band, pulled over her left ankle, that she has worn during matches for much of the past year.

What is different this time, however, is that Lorenz has had to go through a series of hurdles to even be allowed to make this happen, to ensure that she doesn't fall foul of the International Olympic Committee's (IOC) rules on athlete expression. It is a position she feels she shouldn't have been put in.

"I'm overwhelmed and excited," Lorenz said. "It's tough to describe. On the one hand, I feel like it's the only right thing that should have happened.

"But still I didn't really believe the IOC would make a step towards its athletes and make some rule changes. I never expected them to come forward like this."

For Lorenz, the rainbow symbolizes the diversity of her team and the values she and her teammates share.

"I have so many friends in hockey who are homosexual," she said. "For them it feels so good to have achieved this and to show them that every part of them belongs on the field." 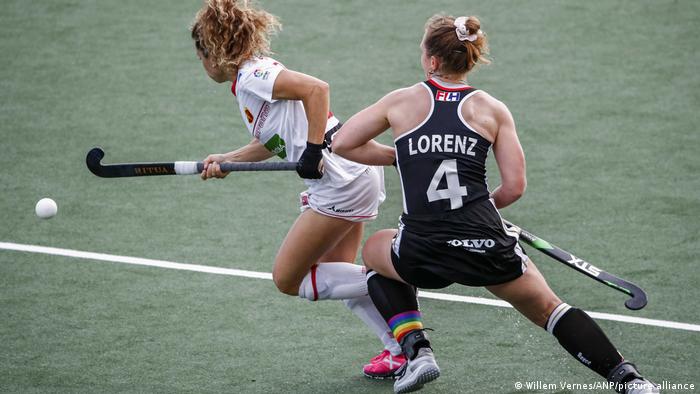 Lorenz was granted permission for her rainbow band on Thursday after the German Olympic Committee, the DOSB, sought special dispensation from the IOC. But her case has highlighted ambiguities in the rules and how they are implemented, and shown the dilemma many athletes face when wanting to challenge them.

In July, the IOC amended its so-called Rule 50, which covers protests by athletes at the Games, to permit them to express themselves at certain times, so long as their actions don't disturb competitors, or target individuals. Protests on the podium are still not allowed.

However, possible sanctions for breaking the rules are unclear, and it is left to each sport's governing body to decide how far they are willing to go to enforce them. For example, footballers competing in Tokyo can take a knee before their matches, while swimmers are forbidden from any form of protest in the pool area.

The International Hockey Federation said it welcomed the fact that "the IOC approved the request of the German team," telling DW that it "does not consider wearing a rainbow armband as a political gesture."

The DOSB has come in for criticism for not clarifying its stance on Rule 50 sooner. Athletes Germany, which supported Lorenz in her case, first asked the DOSB back in April to "examine its role and possible responsibilities in the sanctioning practice of rule violations" — an examination that seemingly failed to take place.

"The problems and issues outlined above are not new and decision makers in national and international federations should have been aware of them for months," Athletes Germany said on Thursday. "It is therefore unfortunate that in Germany, too, there has been neglect to address these issues proactively and in time."

In response to the criticism, the DOSB told DW that it would take decisions based on individual cases and would have "both the rules and the athlete's interest in mind."

"As Rule 50 is a constantly evolving process it makes sense to deal with each case individually," it added. 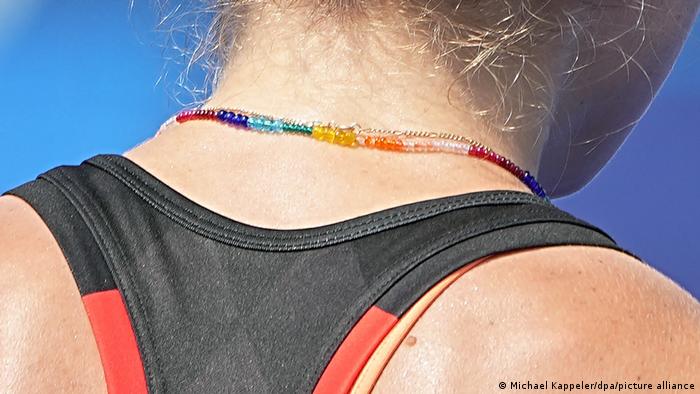 Lorenz, who admitted in a recent interview with German newspaper Frankfurter Allgemeine Zeitung to feeling "abandoned," called that interview a "last resort."

"I felt like a single person couldn't change the rules with the IOC," she told DW. "It's a very big institution and controls so many athletes. I felt I needed a little bit more support. But the least I could do was talk about it and show my disagreement."

While Athletes Germany described the situation with Lorenz as a "signal of hope and an opportunity for sport," the group also raised concerns about the reactionary nature of the decision.

"This chaos acts as a deterrent for athletes who might refrain from making planned statements to protect themselves and/or their teams," Athletes Germany said.

Asked by DW whether athletes in all sports could now display rainbow colours during their events, the IOC said: "When proposals for specific forms of expression are made by teams before the events, the IOC considers them on a case by case basis."

On Thursday, a group of 150 academics, activists and athletes — including Tommie Smith and John Carlos, whose raised fists on the podium at the 1968 Mexico Olympics became a symbol of sports protest — signed a letter calling on the IOC to further review its Rule 50, arguing that "staying neutral means staying silent, and staying silent means supporting ongoing injustice."

Lorenz recognizes the need for some rules but believes messages like hers should always be allowed.

"With the rainbow band I think I'm trying to symbolize and show everything that the IOC explains in Rule 50," she said.

"The Olympic Village is about showing peace and harmony and people coming together with different perspectives. What I had in mind with the rainbow band just seems so in line with what Olympism means."

Stuck in Japan: A vending machine helped them survive