Tokyo 2020: Germany among nations to have gender-balanced flag bearers

For the first time, two flag bearers, one man, one woman, will carry the German flag in the March of Nations at the Olympic Games. Though not compulsory, it's a change that is being encouraged by the IOC: 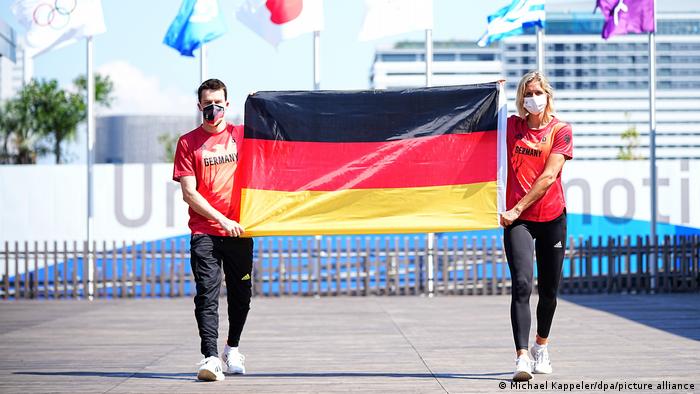 Laura Ludwig and Patrick Hausding are to be Germany's flag bearers for the 2020 Tokyo Olympics, Germany's Olympic Sports Federation (DOSB) has announced. The athletes were the winners of a poll on the internet, with more than 180,000 votes coming in.

Ludwig, 35, is a 2016 Olympic champion in beach volleyball, together with her then partner, Kira Walkenhorst. She'll compete with Maggie Kozuch in Tokyo.

The 32-year-old Hausding won a silver medal in the men's synchronized 10-meter platform dive along with teammate Sascha Klein at the 2008 Beijing Olympics. Five years ago in Rio he won bronze in the 3-meter springboard competition.

For both Ludwig and Hausding, Tokyo 2020 will be the fourth Olympic Games.

In March 2020, the International Olympic Committee (IOC) approved a change in its guidelines to allow two athletes to carry their country's flag together in the Olympic Games' opening ceremony, one man and one woman.

Though it is not compulsory, the IOC said it encouraged the delegations to send out a woman and a man as the country's flag bearers, as part of the IOC's efforts to hold what it calls "the first gender-balanced Olympic Games."

Germany will not be the only delegation to march into the opening ceremony of Tokyo 2020 with two flag bearers. Sailor Hannah Mills and rower Mohamed Sbihi will hold the UK flag, while basketballer Sue Bird and baseball player Eddy Alvarez will lead the United States delegation in the March of Nations.

Tokyo 2020: IOC claims Games to be gender-balanced, but equality is not so simple