Nigerian basketball is an Olympic medal candidate, with a team made up mainly of US-based players. But some question whether relying on the diaspora is a sustainable long-term model for basketball in the country. 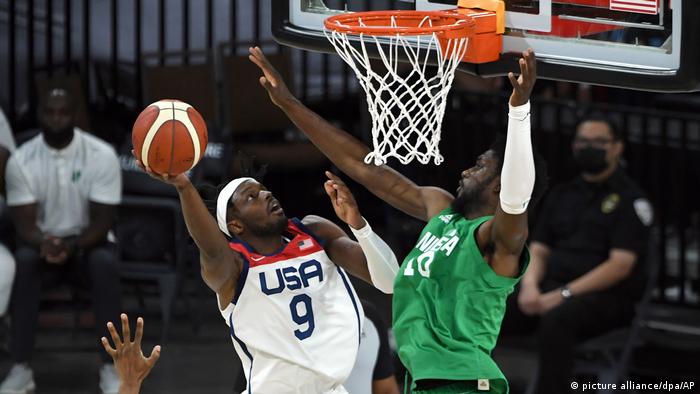 Nigeria in action against USA in an Olympics warmup game

While the biggest sport in Nigeria remains football (soccer), basketball is fast making inroads in the country.

It was a sweet victory for the Nigerians, who were on the end of the worst defeat in Olympic history nine years ago when they lost 156-73 to the USA in London.

Beating the No. 1-ranked Team USA showed just how far Nigerian basketball has come since 2012, while the defeat of Argentina, the fourth-ranked team, was offset by a loss to Australia in their third exhibition game.

Now, in Tokyo, Nigeria have been drawn against Australia, Germany and Italy in Group B. If they make it past the group stage, it would be a first for an African team — albeit one that is forged in America. 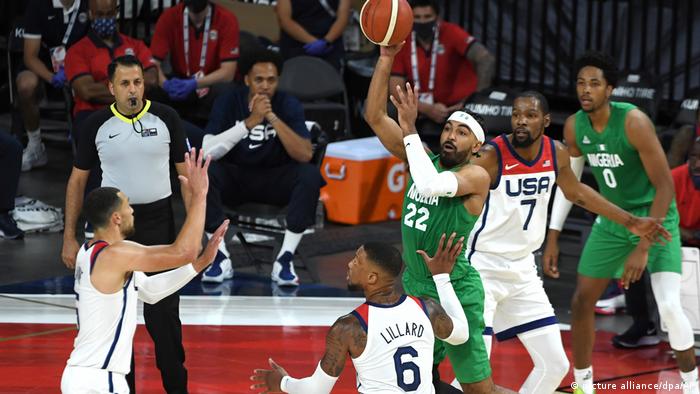 Nigerian basketball relies heavily on the country's US diaspora — but is it a sustainable long-term strategy?

The final squad traveling to the Olympics this month is expected to feature several National Basketball Association stars, including Detroit Pistons center Jahlil Okafor, a former star in the US U-17 and U-19 basketball championships.

Ten of the 15 players that went into the final pre-Olympic camp were born in the United States to Nigerian parents, while the others were Nigerian-born players who later moved to the US, Canada and Australia.

From the days when the national team was mostly made up of US-based college players to a roster packed with NBA stars, Nigera has seen its fortunes rise on the global stage.

From Afrobasket to the NBA

For many decades, the African scene was dominated by Angola, winners of 11 Afrobasket (African continental championship) titles, based on the country's dynamic domestic league.

Despite its vast population, Nigeria long struggled to compete against its African neighbors — despite the fact that in Hakeem Olajuwon, it produced one of the biggest NBA stars of the 1990s.

But with Nigeria failing to make much international progress back then, Olajuwon chose to play with the United States and won a gold medal at the 1996 Olympic Games in Atlanta.

Nigeria began to send young players to US colleges on basketball scholarships in the 1980s and 1990s. They were rewarded with their first Afrobasket bronze medal in 1995, but it would take 20 more years before they finally defeated Angola to win their first African title in 2015. The current crop is more than anything an American team in mentality and composition.

"Many US-based Nigerian parents want their children to play for their country of origin, so there is a huge interest in the Nigerian basketball program," Patrick Omo-Osagie, a former Nigerian youth player who works as a basketball referee and sports consultant in Texas, told DW. "Success will bring more players to consider Nigeria as an opportunity to play international basketball." 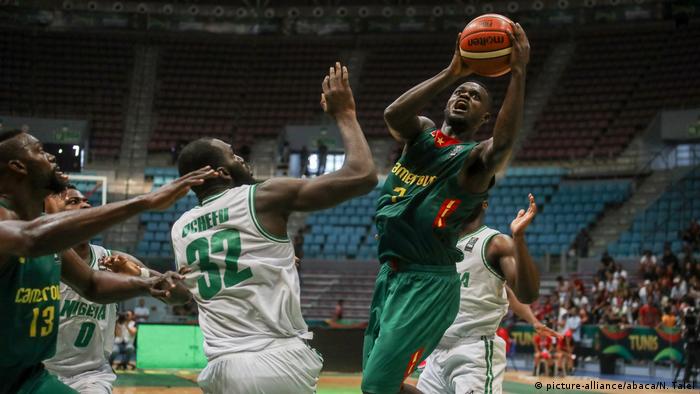 'It's not a crime to be born in Nigeria'

This, however, is a practice that has been criticized back home. Olumide Oyedeji, a former Nigeria captain, feels that the focus on American-born talent robs the country's homegrown athletes of an opportunity to represent their country.

"It is not a crime to be born in Nigeria," Oyedeji told Abuja-based Nigeria Info FM. The former center, who played 93 games in the NBA for the Seattle Supersonics and Orlando Magic, led the team to its first Olympic appearance and African title.

The success of Nigerian international basketball has overshadowed the decline at home, where the Nigerian Professional Basketball League has fallen victim to a political dispute at the top of the country's basketball federation.

"The job of the federation is to develop and promote the game to the best of our abilities, Nigerians from all parts of the globe have a right to represent the country," said Babs Ogunade, vice president of the Nigeria Basketball Federation (NBF). "What works here is talent and competence."

The failure of the Rivers Hoopers, the country's representative at the inaugural Basketball Africa League in Rwanda last May, demonstrated that the country's players simply aren't competitive at an international club level.

"The lack of professional basketball on the domestic scene has limited the opportunities for many players to be seen," said Bode Oguntuyi, Nigeria's leading basketball journalist.

"But there has been an increase in the organization of basketball camps by scouts and former players who select the best players and ship them to US colleges."

Sustainability of strategy in question

The influence of Nigerians is growing in the US basketball system. In 2020, eight players of Nigerian ancestry were picked in the NBAd draft. They joined 19 players of Nigerian descent already in the league. While African centers or "big men" were the Nigerians usually recruited in the past, there is now a broad selection of guards and forwards. And their impact is now starting to be felt on the international stage.

Scouting the American diaspora could be the way to go for other countries looking to grow their international basketball profiles. But as has been the case for Nigeria, this may come at a cost to local player development.

There are also questions about how sustainable the model is in the long term. Omo-Osagie believes that the keen interest from Nigerian-Americans in the program may dwindle in coming years.

"Right now, it is fashionable for Nigerian-Americans to play for Nigeria. In the future, the enthusiasm might no longer be there," he said. "At some point, we must have a good program at home that US-based players complement. Otherwise, there is no use in having a Nigerian federation at home."

Having first qualified in 2012, the Olympics in Tokyo this summer will be the third time Nigeria have featured in the men's basketball events.

"We promise to compete and give a good account of ourselves," said NBF Vice President Ogunade. "Don't also forget the added pressure of being the only African country at the event (male and female). Every game will be tough, we will give no quarter and ask for none."

A good run in Tokyo for D'Tigers this summer would push all of those concerns to the back burner — at least in the short term. 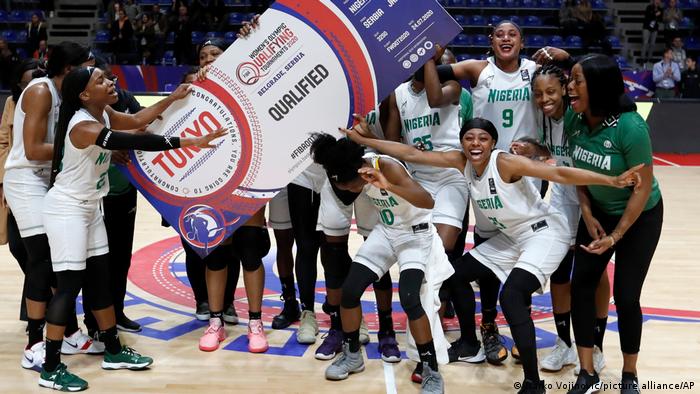 Nigeria's women's basketball team has qualified for the Tokyo Olympics, too.

Investigators say the pilot of the helicopter carrying Kobe Bryant and his daughter likely became disoriented in fog during the flight. The basketball star's death sent shockwaves throughout the sports world.

Wheelchair basketballer Barbara Gross fighting for the right to compete

Barbara Gross is in limbo after the International Paralympic Committee deemed her ineligible to compete at the Games in Tokyo. The German international has vowed to keep playing as she protests the decision.

German basketball players in the NBA

Dirk Nowitzki may be retired, but there are still multiple German basketball players in the NBA. DW takes a look at the six players currently on American teams.

Against the odds – female basketball players in Somalia