To burn or sell ivory: Which can put an end to elephant poaching? | Environment | All topics from climate change to conservation | DW | 29.04.2016

Tens of thousands of elephants are killed every year for their tusks. The Kenyan government plans to burn more than 100 metric tons of ivory, the most ever to be destroyed. But can burning ivory really help end poaching? 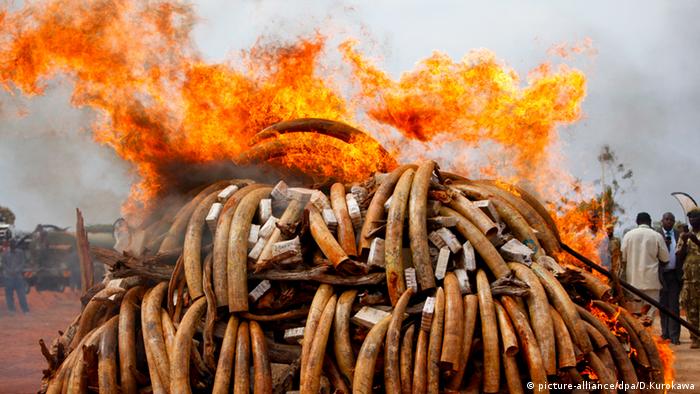 A towering pyre of burning ivory - it's a powerful image, and one that the Kenyan government hopes will send a clear message: the illegal trade in ivory, which kills around 30,000 elephants across Africa every year, will not be tolerated.

Hollywood stars such as Leonardo DiCaprio and Nicole Kidman have been invited to join conservationists and politicians to attend the mass burning on April 30, 2016, when Kenyan President Uhuru Kenyatta will set fire to 105 metric tons of ivory - that's seven times the size of the largest stockpile previously destroyed - along with 1.35 metric tons of rhino horn. 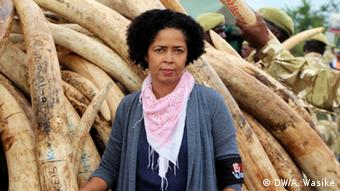 Kahumbu said this will to send the message: "that the ivory trade must be stopped in terms of all domestic markets around the world."

"And a message to the people who buy ivory: shame on them," Kahumbu told DW.

Before 1979, around 1.3 million African elephants were estimated to be living in the wild. But an increase in demand for ivory starting in the 1980s saw the population plummet to less than half that.

And in a gesture aimed at drawing attention to the plight of elephants in a country that relies heavily on tourism, Kenyan then-President Daniel Arap Moi set fire to 12 metric tons of elephant tusks.

Elephant populations seemed to bounce back following the ban. But more than quarter of a century on, conservationists say the world is again facing an ivory crisis - and some are starting to question the legitimacy of mass burnings. 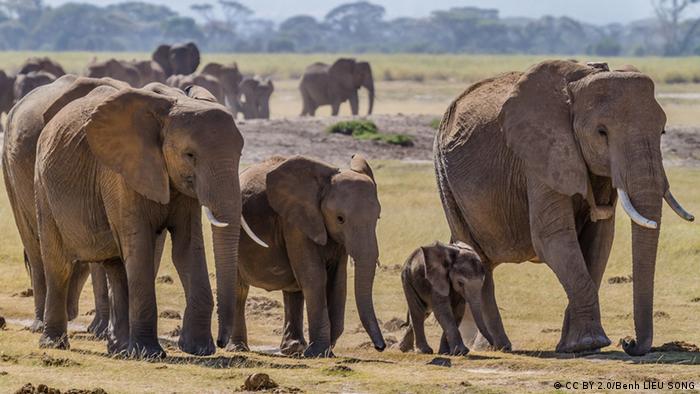 Tom Milliken, an elephant and rhino expert at wildlife trade monitoring group Traffic, says there's very little evidence that destruction events like that taking place in Kenya have resulted in less elephant poaching or a decrease in trafficking.

For public awareness it's very useful, Milliken said. "But unless it's accompanied by a real commitment to beef up anti-poaching in protected areas, law enforcement, efforts to rout out corruption, also at a political level … it won't make any dent in the illegal trade of ivory," he told DW.

One of the biggest problems in tackling the illegal ivory trade is demand for what is known as "white gold" across Asia - ivory is a sign of affluence, and thus increasingly desired by a growing middle class.

As in many countries, including across the European Union, domestic trade in ivory is legal in China, which boasts the largest legal ivory market worldwide. Under CITES, traders are allowed to sell both antique and pre-convention ivory.

But there is strong evidence to suggest that the legal ivory trade allows the laundering of illegal ivory to try and meet demand. 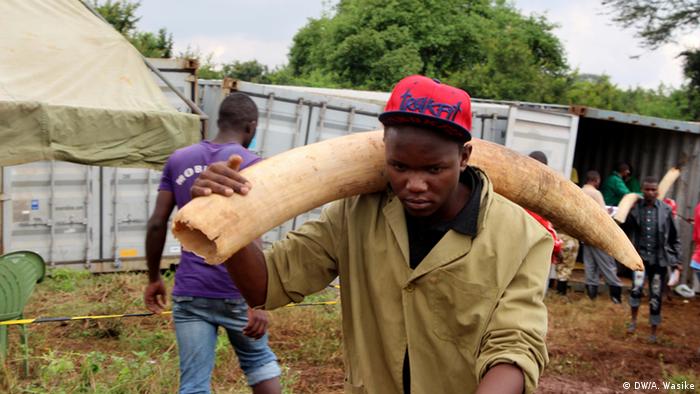 A report published 2015 by conservation organization WildAid said legal stockpiles in Hong Kong alone should have run out by 2004 - but that of the 670 metric tons of ivory authorities had in stock at the time of the ban, 111 metric tons remain. And that number has remained almost unaltered over recent years.

Last year, China - along with the US, the second biggest ivory market - agreed to phase out the domestic market in ivory during a destruction event that took place in Beijing.

"China moving to crackdown on its domestic ivory trade is probably the one strategy that will do more to benefit elephants in Africa than anything else," said Milliken.

But some even doubt that stopping the trade of ivory in China could quell demand.

John Frederick Walker, who has written widely on the trade of ivory, says ivory has been valued since prehistoric times and is not simply a "passing fad."

"The earliest carvings humans ever made were from the ivory of woolly mammoth," Walker told DW. "The attraction to ivory is embedded in world culture, from ancient Egypt to Europe to the far East.

"It's a fantasy to think demand is ever going to disappear entirely," Walker said.

Instead, Walker advocates a highly restricted, controlled legal trade in naturally occurring ivory. This would work through use of techniques such as radiocarbon dating, micro-chipping and databases to keep track of the industry. This could more than satisfy demand, he argues. 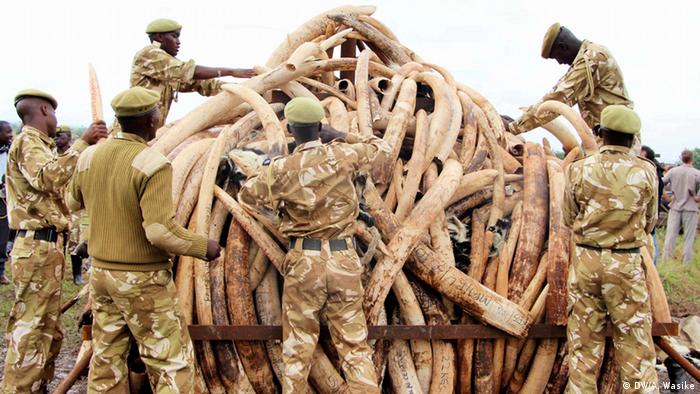 Many conservationists argue that "one-off" international sales of ivory, which took place with CITES approval in 1999 to Japan and then again in 2008 to Japan and China, proved that a legal industry cannot work.

"The idea was that if you flood the market, the price will drop and profitability for poachers will disappear," said Kahumbu.

But what happened had been predicted by conservationists: if you put ivory into China, you remove stigma, and it becomes acceptable to have ivory. "Therefore, you trigger demand that so far outstrips any possible production," Kahumbu said.

Despite a temporary decline in the price, "suddenly there's an explosion in demand - which resulted in phenomenal increase in price," Kahumbu said.

In a conservation presentation, Will Travers of the Born Free Foundation that following the sale in 2008, poaching levels began to "relentlessly escalate" and the price of ivory "rocketed."

Milliken also agrees that ivory should not be dumped on the market to try and reduce prices. But he says there is a lack of evidence to show the effects of both the "one-off" sales as well as the mass burnings of ivory. He says understanding price is key.

"If after this event ivory prices in China start going up, that's a key indicator of the impact in the market," Milliken said.

Conservationists, economists and politicians all agree that something needs to be done to combat the illegal trade in ivory, which is threatening the survival of African elephants.

While Brit Reichelt-Zohlo, an Africa specialist at WWF Germany, argues in favor of burning stockpiles of ivory, she says that what would be more effective is destroying the ivory as soon as it is found.

However, Reichelt-Zohlo adds that even better are engagement schemes and incentive-based conservation that have already been introduced in some countries, and get local people also fighting for their elephants.

"I see the involvement of local communities, and looking at this problem from a global holistic development angle is really important in Africa," she told DW.

"Integrated conservancy models can actually work in conserving and reversing the problem of poaching, and lead to an increase in wildlife numbers," Reichelt-Zohlo concluded.

Park rangers in Zimbabwe have discovered the bodies of 26 elephants who died of cyanide poisoning. The discovery comes a week after poachers killed 14 elephants using the same method. (14.10.2015)

A new study shows that scientists can now match DNA from elephant dung to DNA extracted from ivory to track down the source of large, illegal shipments of tusks and trinkets across borders. (19.06.2015)

Poaching takes a toll on elephants

Rhinoceros horn - but not from rhinos

Amazing Planet: Elephants can hear with their feet and understand different languages 08.09.2022

Elephants are skilled communicators with memories that could give humans a run for their money. But culling and habitat loss is making it harder for them to pass on this expertise.