Park rangers in Zimbabwe have discovered the bodies of 26 elephants who died of cyanide poisoning. The discovery comes a week after poachers killed 14 elephants using the same method. 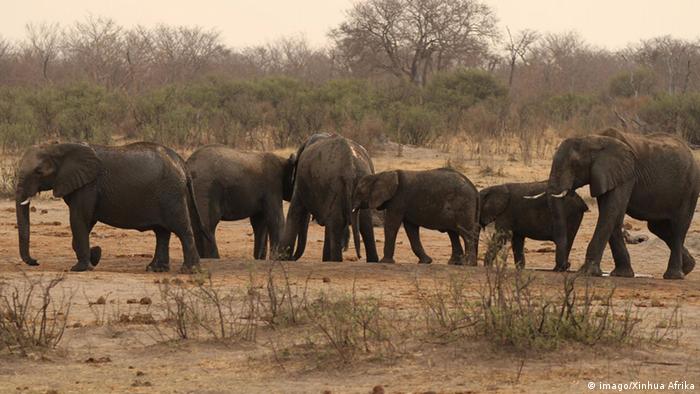 Officials discovered the carcasses on Tuesday in Hwange National Park, in western Zimbabwe. According to the park's spokeswoman, Caroline Washaya Moyo, rangers found 14 tusks belonging to the animals. Others were missing. One widlife conservationist suggested that the poachers might have been disturbed by rangers on patrol before they could take them all.

Forensic tests revealed the animals had died of cyanide poisoning, Washaya-Moyo said, adding that rangers discovered one kilogram of the deadly chemical which is widely used in Zimbabwe's mining industry.

No arrests had been made so far, police spokeswoman Charity Charamba told reporters.

"Cyanide poisoning is becoming a huge problem here and we are struggling to contain it," Trevor Lane, founder of Bhejani Trust and a wildlife conservationist said. Tuesday's discovery came a week after 14 elephants had been killed by lacing their food with cyanide.

The animals had also been killed using cyanide, which is easily obtained from Zimbabwe's poorly guarded mining sites. Around 300 elephants died in 2013 after hunters laced salt pans with the killer substance.

Wildlife experts are additionally worried about the impact that cyanide could have on the environment. "The authorities must deploy the police and army in the parks," Johnny Rodriguez said, adding that using cyanide kills elephants and vultures in turn, who feed on the dead animals' carcasses.

Zimbabwe's officials say conservation efforts have slackened after the US banned sport hunting. "All this poaching is because of American policies. They are banning sport hunting. An elephant would cost $120,000 (around 104,800 euros) in sport hunting but a tourist pays only $10 to view the same elephant," Water and Climate Minister Oppah Michinguri told reporters.

Zimbabwe: no charges for US dentist who killed Cecil the lion

Hunter Walter Palmer will not face charges for killing the famous animal in Zimbabwe, officials in the African country say. The US dentist's hunting papers were in order, according to authorities. (12.10.2015)

Three US airlines have announced that they will no longer accept lion, leopard, elephant, rhino and buffalo trophies as cargo. The move comes after an American dentist killed a well-known lion in Zimbabwe last month. (04.08.2015)

Zimbabwe officials have restricted hunting of lions, leopards and elephants around Hwange National Park, after a tourist killed the park's iconic lion. Another lion in the reserve has also reportedly been poached. (01.08.2015)