Tips for apartment hunting and moving in Germany

Roughly 8 million Germans move house every year. So what's it like? DW's Cristina Burack shares some quirks of finding a new place to live in Germany, and learns that Germans are not afraid to be hands-on in the process.

When apartment hunting in Germany, the phrase, "Everything but the kitchen sink" takes on a whole new meaning — a literal one.

Apartments can come without kitchens. No stove, oven, no fridge — and no sink. For many first-time apartment hunters in Germany, this comes as shock. It certainly did for me..

It was one of the things that became a deal-breaker in my hunt to rent an unfurnished apartment. I was willing to "rent" the kitchen from the landlord — that is, pay a little more every month to use the equipment already in there. I was willing to "buy" the kitchen off the previous tenant — a move in their interest too, since they wouldn't have to rip out their cupboards and cabinets when they left. I just didn't want to have to measure, select my fittings, order them, wait for delivery, install them and then deal with the unavoidable outcome that something wouldn't fit right — and all just to be able to make a hot meal weeks after moving in!

Oh, and you may have to live in the dark at first, too, since unfurnished flats often lack light fixtures and bulbs.

But when it comes to moving, I learned, Germans are prepared to be hands-on: According to Deutsche Post, 54% of Germans who move do some kind of renovation or fixing up of their new place. This readiness to change the space was evident during group viewings, when I felt exposed as the newbie: Everyone but me seemed to come equipped with a long, foldable meterstick. They used it to measure whether the oven they planned to bring would fit or how much clearance a lofted bed would provide. 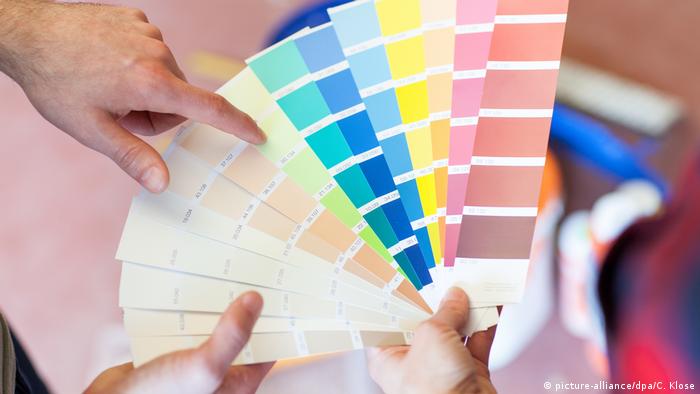 Germans aren't afraid to get hands-on in their new places, tackling everything from painting to building cupboards

Other potential tenants would also ask about the size of the flat in meters squared and then nod appreciatively at the number immediately offered up, perhaps saying, "Really feels bigger than 45 square meters." I had no instinctive feel for this type of space measurement, but after seeing numerous apartments, I began to get a rough idea of how big a place would be when it was listed in an ad.

Learning how room descriptions worked was a lot faster to pick up. Whereas a listing for "2 Zimmer," or "two rooms," usually means a two-bedroom apartment in the US, walking into a German flat with that description and finding two rooms, as in one to serve as a bedroom and one to serve as a living room, made it pretty clear that rooms are tallied up without differentiating use. It's very straightforward, in a way: A three-room listing means three rooms that you can use however you want! 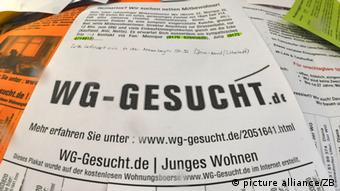 Some Germans put up signs saying they are looking to rent or have an extra place in their shared flat, or "WG"

What is not so straightforward is rent, because there are two types: "warm" and "cold." The "cold" rent is the price to pay for the space alone. The "warm" rent includes heating, electricity, water, and then of course there are other monthly costs to remember like building admin fees, for the company that keeps the halls clean and takes the trash out, and internet.

Apropos internet: Arrange it early. Months ahead of time, ideally. I would advise arranging it before you even know you want to move, if this were even possible! I learned the hard way. Getting internet takes forever, thanks to "the last mile." While it would make a good movie title, it actually refers to the final distance that internet cables cover before connecting to an apartment. This is usually owned by the market-dominant provider, which rents the cable's usage out to many different internet providers. So when it comes to switching internet on for a new tenant, this big company holds the keys — and it has no incentive to unlock access quickly.

In comparison to all that, the physical move itself seemed easy. Some 28% of Germans hire a moving company, the well-known moving portal Immobilien24Scout has found, but I joined the majority and did it myself: rented a van, roped some friends in with the promise of food and beer as a thank you, and hung up a handmade sign on the street asking for forgiveness for parking where I shouldn't have been.

And while settling in takes a while, I discovered that the German postal company offers a handy service that automatically updates your mailing address for you with businesses, offices and utilities. At least I could get snail mail while waiting for my internet.

Dipping in the pool, snacking on french fries and ice cream, sunbathing in the park: That's how people spend a day at the "Freibad." Here's a look at some of the Germans' typical habits at outdoor public pools. (29.05.2019)

10 things you need to know about German apartments

In Germany, you may need to bring your own kitchen - and paintbrush - when renting an apartment. In a country with one of the highest rental rates in Europe, a rich and sometimes quirky rental culture has developed. (21.07.2017)