Dipping in the pool, snacking on french fries and ice cream, sunbathing in the park: That's how people spend a day at the "Freibad." Here's a look at some of the Germans' typical habits at outdoor public pools.

When I discovered different outdoor public swimming pools in Germany, I was very impressed by the large parks that are included within the facilities. The public pools I knew from Montreal, Canada, might have a small lawn area — but nothing like the grounds I've noticed in Berlin and in other German cities.

For Meet the Germans, I asked Berlin's public pools' spokesperson, Matthias Oloew, to explain where this comes from.

Matthias Oloew: I can't compare with other countries, but outdoor public pools in Germany typically have a lawn for sunbathing and lounge areas, a cafe, a restaurant, or something similar. Playground equipment can also be found there to allow people to stay all day or several hours without getting bored. 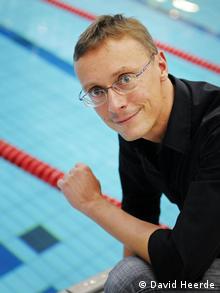 Matthias Oloew is the spokesperson for Berlin's public swimming pools

Such outdoor public pools in that style developed in the 1920s, after the Revolution [of 1918-19] and following a social movement known as the "Lebensreform" [literally, "life reform," a German and Swiss movement that propagated a back-to-nature lifestyle in reaction to industrialization].

The idea was to offer people a break from the city with these outdoor pools, and that meant bathing in light, sun and air — and in water of course. And that was only possible with lounge areas on the beach and on the lawn.

There was even the idea of integrating cultural and theater events by setting up a stage within the pool facilities, but that wasn't implemented. In any case, outdoor pools in Germany offer an example of leisure architecture.

Can you name examples of pools in Berlin that have a particular architecture?

There are a few lidos that have a particular architecture for their time. There's the Strandbad Wannsee [the German term "Freibad" includes lakeshore lidos, known as the "Strandbad," and swimming pools with concrete basins, the "Sommerbad"]. 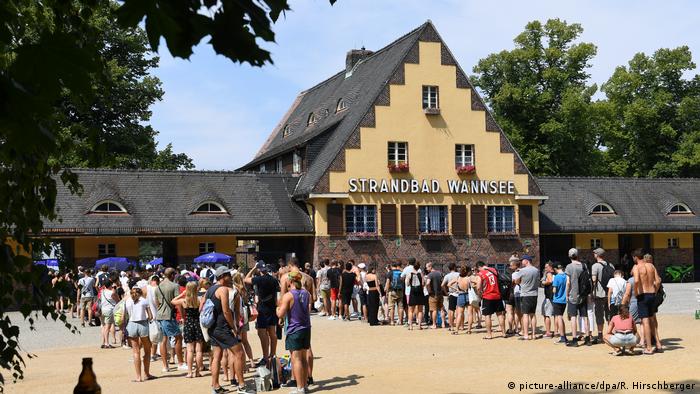 The Strandbad Wannsee featured new architecture from the 1920s-1930s, inspired by the Lebensreform social movement. With its large terraces and large walkways, the "see and be seen" principle was implemented in its architecture — that would have been forbidden 20 years earlier, at the beginning of the 20th century. The architects created infrastructures that reflected the new democratic society.

Today, there are examples of architecture for outdoor swimming pools, such as the Sommerbad Neukölln on Columbiadamm, that are very interesting. The architects designed the changing rooms in a way that when one looks at them from above, it looks like a landed plane — in reference to the Tempelhof airport nearby.

The garden design also reflects Berlin's diversity; each tree is a different species and there are several exotic ones as well. 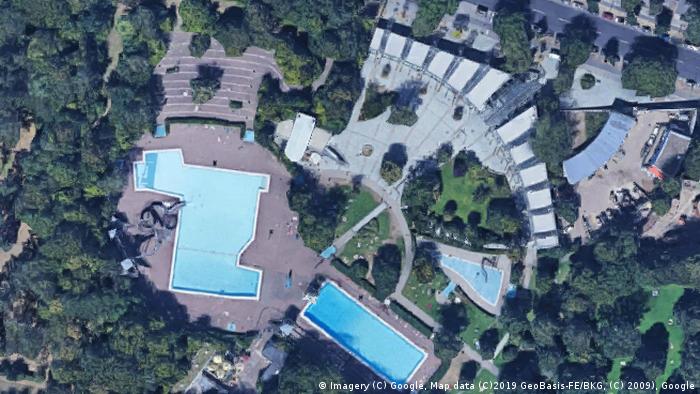 The Sommerbad Neukölln is right next to the former Tempelhof airport, and that inspired the pool's architects

Events are rather limited, but there are some, such as open-air cinema screenings or pool parties and the like. But, generally speaking, the swimming pool is a space of rest and contemplation. It should offer escape from the everyday.

The pools are full when everyone wants to go — when it's really hot in the summer. Outdoor pools are designed for a specific capacity; many thousands of people may come on hot days, but most people only go on those hot days. On other days, the outdoor pools are not full at all; they're surprisingly empty, and you can go for a nice and relaxing swim!

How sports venues have inspired artists

Stadiums, fields and swimming pools have often served as muses for filmmakers, painters and writers. Some have left the focus on the sport, while others have turned the venues into backdrops for comedies or psychodramas. (19.08.2016)

Where to get naked in Germany

In Germany, stripping down to your birthday suit is a popular pastime for people of all ages, shapes and sizes. For the Meet the Germans series, DW's Kate Müser explains where clothes are optional. (09.08.2017)