Did you know that the Roman emperor Nero loved sorbet made of rose water, that you can eat beer ice cream in Munich, and that the Gelato World Tour is on the lookout for the world's very best ice cream?

Stracciatella! Fior di latte! Amarena! Italian ice cream - gelato - enjoys the reputation of being the world's best. After all, the Italians invented ice cream - or that's at least what most people are likely to think. But that's not the whole truth.

The icy temptation was actually invented by the Chinese some 5,000 years ago. The question is: How did they manage to keep it ice cold? They collected snow from the mountains in huge containers and then kept it cool in holes in the ground. According to tradition, honey, wine, fruit and spices were added to the mixture. The ancient water-based ice cream was more of a sorbet.

Some 1,500 years later, the Chinese discovered that liquids could be cooled down by adding salpeter. The discovery ended the practice of collecting snow for this purpose.

The Romans also appreciated sorbet, which they produced in a similar fashion by collecting snow from the Alps. Runners brought the precious good into Roman palaces at high speed so that it wouldn't melt away on the way. Emperor Nero is said to have loved lemon sorbet enriched with squashed raspberries and rose water. In the 13th century, the Venetian traveler Marco Polo introduced Asian ice cream recipes in Europe. Starting from Venice, they became known across the continent - which is why many people believe that ice cream was originally an Italian invention.

2. What are Venezia, Dolomiti and Cortina?

Ice cream parlors in Germany have a myriad of exotic names, with "Venezia," "Cortina" and "Dolomiti" being the most widespread. The popularity of "Venezia" is probably due to the fact that Venice was Marco Polo's hometown. "Cortina" is a short version of the Italian ski resort Cortina d'Ampezzo located in the "Dolomiti," the Dolomites. In fact, Germany's first generation of Italian ice cream makers came from the Dolomites.

Nowadays, more and more ice cream parlors without Italian roots are opening in Germany, offering a new selection including things like vegan ice cream or organic cones. These kind of shops often have fancy names like "I am Love" (Bochum), "Eismanufaktur Berlin" ('ice cream factory'), "Eiswerk" (Hamburg) or "Keiserlich" (Cologne).

3. What is the connection between ice cream parlors and soccer?

In June 2017, an ice cream parlor was opened in Cologne whose name doesn't really sound Italian: Ice Cream United. More than 2,000 people came on opening day to get an ice cream for free - because it was handed out by German soccer star Lukas Podolski. The former national team player lives in the city on the Rhine River. Together with Italian friends and ice cream experts, he opened this special ice cream parlor in a trendy Cologne district. 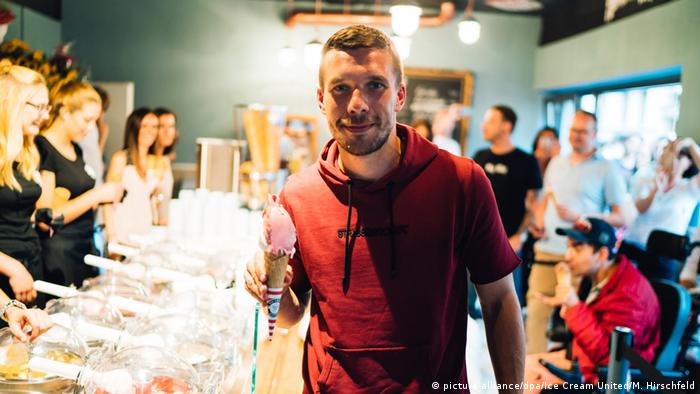 What's so special about the ice cream is not only its initiator, but also its production: Both the ice cream and the cones are freshly produced by the parlor. No wonder that it's considered "incredibly yummy," as Podolski puts it. Customers can choose from 12 tasty flavors. Much to the dismay of soccer fans, "Poldi" himself will not be visiting his parlor much in the future, since he is about to move to Japan, where he signed a contract with the soccer club Vissel Kobe.

4. Tell me what your favorite ice cream is, and I'll tell you who you are.

Some people have tried to associate ice cream preferences with particular character traits, and have even created so-called ice cream horoscopes.

According to that "science," vanilla ice cream buffs are down-to-earth and reliable, they don't quickly lose their temper, and are able to keep secrets. Strawberry ice cream fans, however, are hard-working and wise. 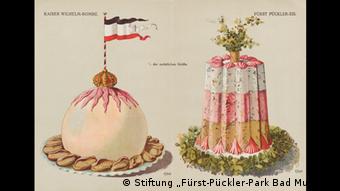 Prince ("Fürst") Hermann von Pückler-Muskau was not only a famous garden designer and a passionate traveler, but also an eccentric gourmet who enjoyed dining for hours. Although he wasn't rich, he only chose the very best ingredients for his meals. He particularly appreciated the creations of the cook at the Prussian royal court. One day, this cook created a heavenly dessert consisting of frozen cream, sugar and fruit.

Prince Pückler was so thrilled with the cold treat that it was given his name. Nowadays, a so-called "Fürst-Pückler-Eis" is a mixture of strawberry, vanilla and chocolate ice cream containing a lot of cream. Thanks to its high fat content, the mixture keeps its creamy consistency. It's sold as an ice cream pie that can be cut into slices or inserted into an ice cream sandwich.

Vanilla, chocolate or strawberry ice cream can seem quite boring when compared with other, more extravagant creations. Even the little chocolate pieces in stracciatella ice cream are boring when you can also get caramel-fleur-de-sel, chili chocolate, strawberry cheesecake, orange basil, or yoghurt cucumber.

There are no limits to the creation of new kinds of ice cream, as flavors like pear with grappa and parmesan show. The Munich-based ice cream maker Matthias Münz even offers ice cream made with Bavarian veal sausage and brown ale.

Obviously, customers find just about anything that somehow goes together tasty - even ice cream containing gold. Is that supposed to enhance the taste? Well, Cleopatra is said to have drunk wine made of pearls. 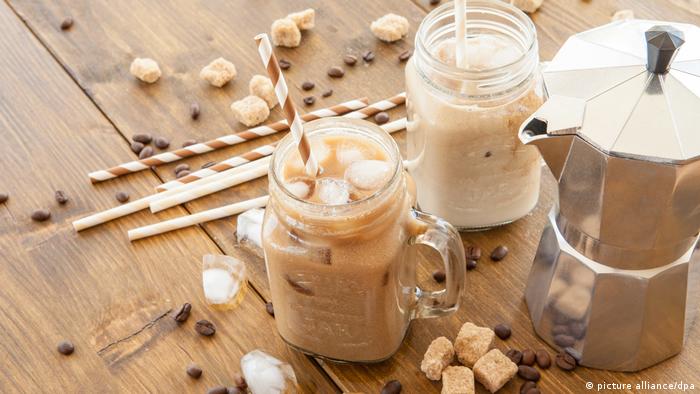 7. Which flavors do Germans prefer - and how much ice cream do they consume?

Germans devour roughly eight liters of ice cream per person per year - that translates into 113 ice cream scoops each. But the Germans are outdone by the Norwegians who eat twice as much.

According to the association of Italian ice cream makers (UNITEIS), Germans are loyal to classic flavors such as vanilla, chocolate, strawberry and stracciatella, followed by yoghurt, latte macchiato, lemon, hazelnut, raspberry and cherry cream. Other lists also rank more exotic flavors like mango or pistachio among the top 10 favorites. The latter was even chosen as the ice cream flavor of the year in 2016.

8. How were popsicles invented? 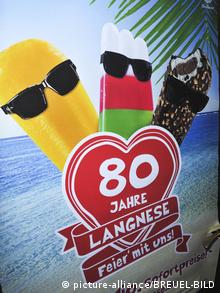 German folk singer Heino wrote a song called "Ice in the Sunshine," which was used to celebrate the 80s anniversary of producer Langnese

Some kinds of popsicles have attained cult status in Germany, among them "Capri," "Calippo," "Split," "Nogger," "Dolomiti," "Brauner Bär," "Ed von Schleck," and "Flutschfinger." The popsicle was discovered incidentally by a boy while he was preparing lemonade. He stirred the liquid with a little wooden stick and put it into the freezer with the stick. The next day, the liquid was frozen - with the stick in the middle. the popsicle was born.

9. What are the ingredients of ice cream?

The basic recipe for ice cream consists of sugar, milk and cream, whereas sorbets contains sugar, water and fruit. Let's be honest - with all that fat and sugar, ice cream cannot really be considered part of a healthy idet. A scoop typically contains around 120 calors, while a scoop of sorbet weighs in at just 50 calories.

Ice cream (and sorbet) can also be known to cause a brain freeze. But that's not such a bad thing, since that causes our mouths to clamp up, so we eat less of the delicious sweet stuff - and avoid breaking our belts.

Click through the Spotify playlist below for 20 songs dedicated to ice cream - from AC/DC and Klangkarussell to Paolo Conte and Bürger Lars Dietrich:

8 ways you know it's summer in Germany

Since the sun doesn't always shine during the summer in Germany, here are other ways to identify the best season of the year. (05.07.2016)

The days of Germany only being known for its hearty cuisine are over. Ice cream is whetting the appetites of Germans nationwide - to the tune of $2.7 billion in market value in 2013. (01.08.2014)

It's summer in Germany. That means people go on vacation, jump into their local pool and enjoy the warm sun. Here are 11 German words you might hear often this time of year. (05.07.2017)