The Italian coast guard and NGOs have saved thousands of migrants from the Mediterranean over Easter weekend. The EU is concerned smugglers will use better weather and instability in Libya to send more migrants. 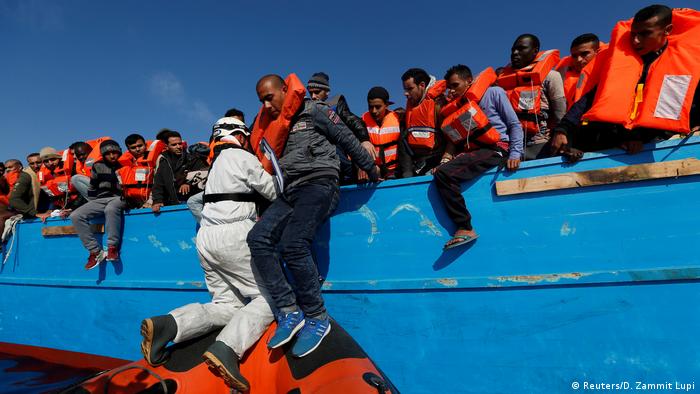 About 8,300 migrants were rescued in the Mediterranean over Easter weekend, as smugglers took advantage of calm seas and better weather to launch boats to Europe.

The EU border agency Frontex saved more than 1,400 migrants in 13 rescue operations, while private humanitarian organizations were involved in the remainder in coordination with the Italian navy.

The migrants, mostly Africans making their way in unseaworthy boats from Libya, were taken to Italy for processing.

The EU border control agency Frontex has accused non-government groups rescuing migrants of acting "like taxis." Italian prosecutors have suggested the non-government affiliated groups have links to traffickers, a claim the groups have strongly denied.

More than 24,000 migrants have crossed the Mediterranean Sea from Libya to Italy over the first three months of 2017, many more than the 18,000 people who crossed during the same time period in 2016, according to the UN High Commissioner for Refugees (UNHCR). After closing off the Balkan route to migrants and slowing crossings from Turkey to Greece last year, European governments are increasingly concerned about a new wave of migrants crossing the Mediterranean from Libya, a lawless country with a long coastline controlled by both rebel and government factions.

Migrants from sub-Saharan Africa fleeing war and poverty have created an opportunity for smugglers, who calculate migrants will be picked up by rescue boats after entering international waters 12 nautical miles off Libya's coast. In many cases, the rescue calls come directly from unseaworthy boats.

The coast guard and other groups have saved migrants one day after nearly 100 were feared drowned following a shipwreck. Some groups are calling for more help from the EU. (15.04.2017)

A joint rescue effort by humanitarian organizations, Frontex and the Italian coast guard saved six boats off the coast of Libya. Close to 500 people have died while trying to cross from Africa to Italy so far this year. (03.03.2017)