Opponents of Iran's theocratic government have rallied in Berlin to protest the country's human rights record. They urged potential investors not to support the regime and said the West should not do deals with Tehran. 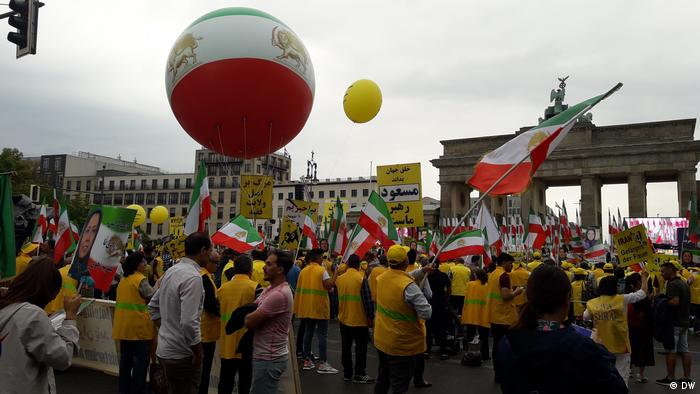 Thousands gathered in Berlin's government quarter on Saturday to protest the Iranian government's use of draconian measures against its opponents.

Protesters, who carried pre-Islamic Revolution flags and balloons in the national colors of green, white and red, voiced opposition to both the use of the death penalty and torture in prison.

"Down with the regime" was among the slogans chanted, along with: "The West should not enter into any compromise with religious fascism."

A message from Maryam Rajavi, leader of the People's Mujahedin of Iran, a controversial group that seeks to topple the regime, was played to the crowd.

In it, Rajavi condemned the Iranian government for carrying out acts of terror in other countries. Among them, she said, were the Mykonos restaurant assassinations, which targeted Iranian-Kurdish opposition leaders. 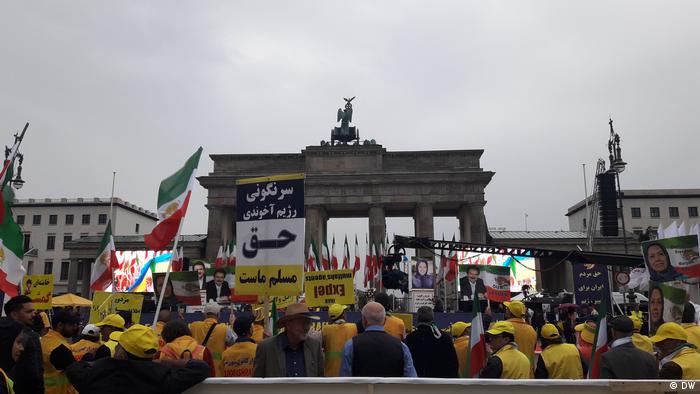 Protesters called on European nations not to do business with Iran

Rajavi called on Chancellor Angela Merkel to send a delegation to Iran to assess the state of prisons and Iran's claims that there are no political prisoners and no torture in its jails.

Javad Dabiran, Berlin representative of the National Council of Resistance of Iran, told DW's Farsi service that the Iranian government — under pressure at a national and international level — was increasingly resorting to the use of the death penalty and suppression of minority rights.

"This regime cannot be reformed," said Dabiran. "We want to convey the message that any investment that seeks to change this regime from within is a mistake and that's what Europeans are doing. For this reason, we're calling on Germany and the European Union to rethink their policy, because it is catastrophic."

Iran has faced international criticism over its use of capital punishment. As well as using the death penalty for serious crimes like murder and rape, the country's legal system also imposes the ultimate sanction for homosexuality and political dissidence.

Iran has suggested that it will boost uranium enrichment to 5% — well above the 3.67% cap set under the 2015 nuclear deal. Tehran has begun to row back on commitments after the US withdrew from the accord. (06.07.2019)

Tensions are running high in the Persian Gulf after Iran warned that it will increase its enrichment of uranium to "any amount that we want," starting on Sunday. Many in Iran feel conflicted about the current situation. (05.07.2019)