The wetlands along the river Rhine struggle to recover from human engineering | Environment | All topics from climate change to conservation | DW | 02.02.2017

The Rhine River once curled and turned, flooding and receding to support a rich mosaic of forests, meadows and marshes. Straightening the river out has been disastrous for its wetlands. 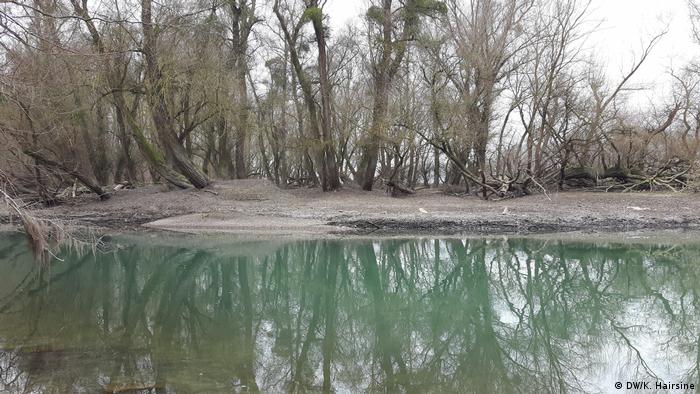 It's a leisurely 9-kilometer (5.6-mile) bike ride from the center of Karlsruhe in southwestern Germany to Rappenwört, where a narrow sliver of translucent green wetland lies nestled between the Rhine River and a raised earth embankment.

"It's an original meander bed from when the Rhine still flowed in its natural course. It flowed in here in a giant loop," says Andreas Wolf, a biologist and head of the Nature Conservation Center Karlsruhe-Rappenwört, as he walks along the edge of the wetland, crunching over stones, shells and patches of ice.

But it's these unspectacular-looking trees Wolf is excited about. 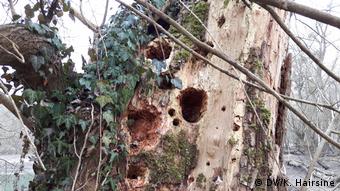 Woodpecker holes hint at some of the life supported here, even in the depths of winter

"This is a white willow forest, a softwood forest. It's an area that is often flooded, and the white willow can withstand up to 300 days a year with its feet in water," he explains, pointing to wide crowns which will burst into shimmering pale green foliage in spring.

A number of thin saplings dot the bank - a great sign, says Wolf, that regular flooding is sweeping away undergrowth and bringing in the new sediment that white willows need to germinate.

On the opposite side of the wetland, it's a different story. In a copse of mature white willows, some around 20 meters high and 100 years old, there's not a sapling in sight.

"When these trees fall down, that's it," Wolf sighs. "In principle, this wetland is connected to the Rhine, but because of the stone groin at the front, the current just doesn't flow swiftly to create the flood dynamic needed."

It's the flow and ebb of the floods that made this area so special.

Up until 200 years ago, the Rhine meandered, curled and inundated its way from its source in the Swiss Alps all the way to the Dutch coast, where it empties into the North Sea.

For several hundred kilometers downstream of the Swiss city of Basel, the course of the Rhine was particularly unpredictable. Here, in an area known as the Upper Rhine, which runs along the border between France and Germany, the river split into countless tributaries that looped through a giant rift valley bound by the Black Forest on one side and France's Vosges mountains on the other.

Swollen by spring snow melts or summer rains, the valley could flood up to a width of 40 kilometers, at times sweeping away whole villages, explains Jost Armbruster, an engineer and biologist in the Nature Conservation Unit at the Karlsruhe Regional Council.

These meandering floodwaters created a complex and rich mosaic of different habitats ranging from open rocky islands formed by gravel swept down from the Alps, to low lying swampy areas and the moist softwood forests at Rappenwört, which thrive in the rich silts and clays dumped during a flood. 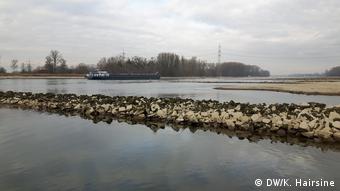 The Rhine has undergone extensive "correction" to accommodate boats

With so many diverse conditions in one area, the floodplain forests have a rich biodiversity. Some 9,000 plant species, as well as a rich variety of animals, birds and insects, including 55 different types of dragonfly and 170 types of wild bee, are found here.

Penned in and parched

Because of the area's ecological importance, in 2008 the Upper Rhine floodplain became one of only ten cross-border sites certified under the international Ramsar wetlands convention.

But like others in Europe, the Upper Rhine's floodplain forests are being parched of their vital floodwaters. Two hundred years ago this year, the ground was broken on a colossal project, just five kilometers away from Rappenwört. The engineer Johann Gottfried Tulla was in charge of the Rhine "Correction" program, which aimed to straighten the Rhine and reduce flooding.

During the past two hundred years, the Rhine has been put into a kind of straightjacket - its bends have been straightened and groins have been added to increase the water flow for the barges transporting cargo along the river. Its banks have been reinforced and it's been hemmed in by dikes.

On both the French and German side of the Rhine, there are efforts large and small to improve the conditions of the Upper Rhine. As part of a European Union-sponsored LIFE conservation project, for example, two Rhine branches that had become separated from the Rhine were recently reconnected. 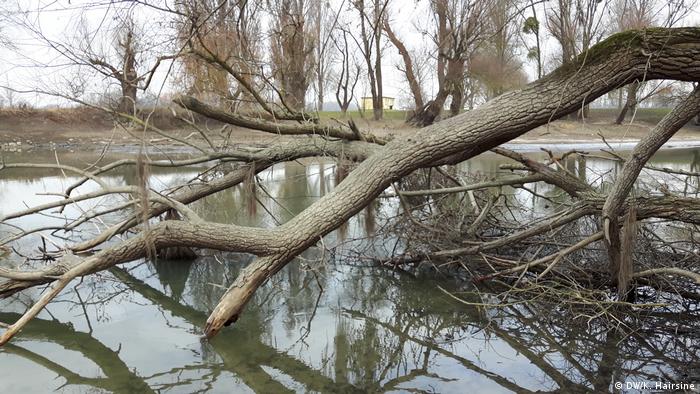 "The mud and silt that had deposited in them in the last decades could be washed out, making the tributary bottoms gravelly again," says Armbruster, the project manager. "Certain types of migratory fish, such as the salmon and the allis shad, a type of herring, need these gravel bottoms to spawn."

Three artificial islands were also built as part of the LIFE project. Their gravelly banks are vital feeding and nesting grounds for wading birds such as the ruddy and the little ringed plover, which only nest on open ground.

Projects such as this one, which was supported by the EU as well as local and state authorities, show a changing awareness of the urgent need to save the remnants of the Rhine wetlands.

But without regular and extensive flooding, both Armbruster and Wolf say there are limits to how much the area can be regenerated.

In Rappenwört, skaters traverse a frozen tributary that's still separated from the Rhine by an embankment. In a few months, the waters will fill with migratory birds returning from the south, and the white willow forest will be carpeted with wildflowers - further reminders of the precious life this river brings.

A historic drought is drying out the few remaining wetland areas along Germany's Rhine river, putting native wildlife under stress. Conservationists hope that restoring these delicate ecosystems will make them more resilient in the face of future extremes.