The University of Maiduguri has stayed open at the epicenter of the Boko Haram insurgency. A new book gives voice to the Nigerian academics who faced off with the radical Islamists who reject Western education as sinful. 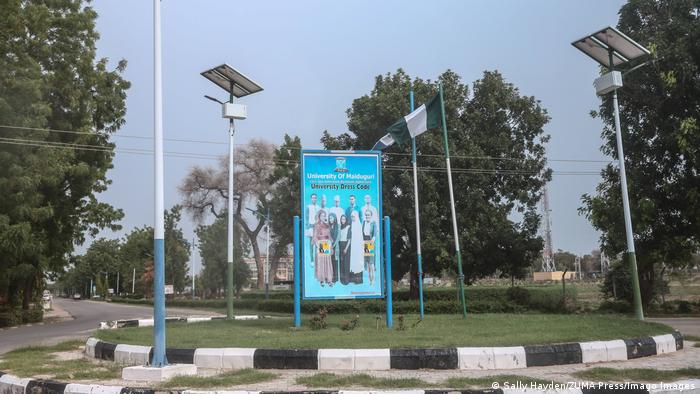 The University of Maiduguri, commonly known by its acronym UNIMAID, is the largest institute of higher learning in northeastern Borno State. Its alumni include the state Governor Babagana Umara Zulum and some of his counterparts elsewhere, Nigeria's Chief of Army Staff Tukur Yusuf Burati and Senate President Ahmed Lawan.

UNIMAID dates back to the 1970s. The university has admitted thousands of students each year since. The emergence in Maiduguri of the radical Islamist Boko Haram in the early 2000s has left a mark but never forced the institution off track.

The outlawed group wants to create an Islamic caliphate around the Lake Chad region. In 2009, security forces captured and killed Mohammed Yusuf, the founder of Boko Haram. But the group's ideology and violence have continued to spread, even beyond Nigeria.

The militants frequently rampage through the region and specifically targets the education system — infrastructure, learners, and teachers. Women pursuing an education it deems inappropriate are at high risk. 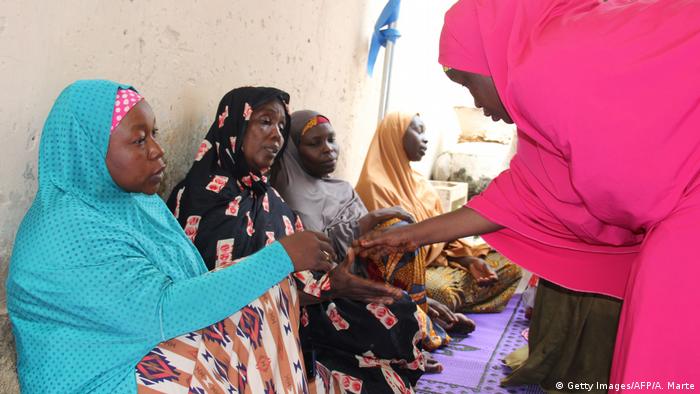 A long deep trench shields the university from militants. German musicology researcher Dr. Nepomuk Riva has never been to Maiduguri — its too dangerous. But when in 2016, he heard about the conditions around UNIMAID from his academic counterparts, he was fascinated and felt compelled to document it.

The academics Riva spoke to for his book, titled "Academia under Attack: Accounts of the Boko Haram Insurgency at the University of Maiduguri" were at the University of Hildesheim in northern Germany, where he is based on an exchange program of the German Academic Exchange Service (DAAD).

"It was the first time I got to know people there, and the only thing I knew was that they are living at the epicenter of the Boko Haram crisis for many years," Riva recalls. "So, the professors, the research students, the PhD candidates, we started talking about the Boko Haram crisis. It's a story I had never heard before."

Riva interviewed 15 academicians from UNIMAID in Germany and Nigeria and published 13 accounts to provide the broadest impression of the situtation. They Maiduguri-based academics asked to speak anonymously. "Some of them have a Muslim background, some are Christian and some based in Maiduguri with their families and Afropolitans with family backgrounds in Britain or America."

Read more:  Which requirements do I have to fulfill for a DAAD-full scholarship?

He says he was hesitant to probe and perhaps trigger trauma. "I realized that all of them are really eager to talk about their experiences because they know it's a story that most people in the outside world don't know," Riva told DW. "They are critical of Western media that portrays northern Nigeria like a monolithic bloc of Muslims who are all part of Boko Haram, it's more complex."

Riva says the most striking accounts are of situations on campus at UNIMAID when militants were attacking nearby and stray bullets hit the roofs of its seminar rooms, or when the sound of bomb blasts send students to the floor for cover. "As a German, I can hardly imagine a situation like that." 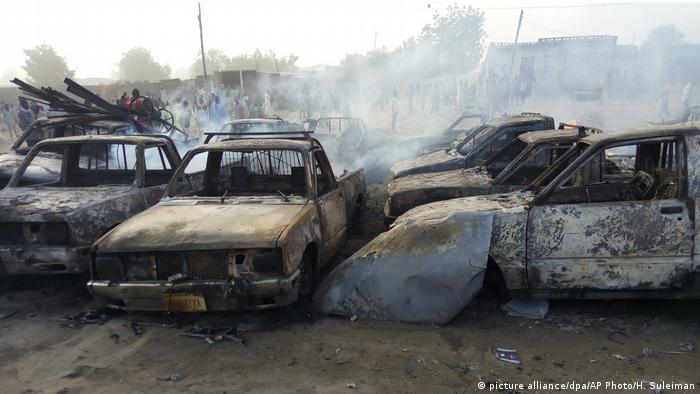 In the book, Mr. E talks about how he considered leaving Maiduguri and to return to his home state. "But it was also suffering from Boko Haram attacks from time to time. So, it was equally unsafe. Then, the university didn't close. And for a big reason, we recognized that if we had closed the university, Boko Haram would have said they had succeeded in defeating the security forces."

Mr. E recalls how the security officials had commended UNIMAID, saying, "Your presence is giving us hope that we will conquer."

A place of learning and refuge

Riva also documented the account of Mr. M, who recalls the dilemma that the deteriorating security situation presented to the academics and explained, "I had to stay behind" despite Boko Haram. Staff and students left en masse, some of them returning home to Nigeria's predominantly Christian south.

"They started finding excuses of the family not being well or their wife becoming traumatized, so they had to leave the environment and so on. We the indigenes, we who are from Borno, if we leave, who else will come and stay here." 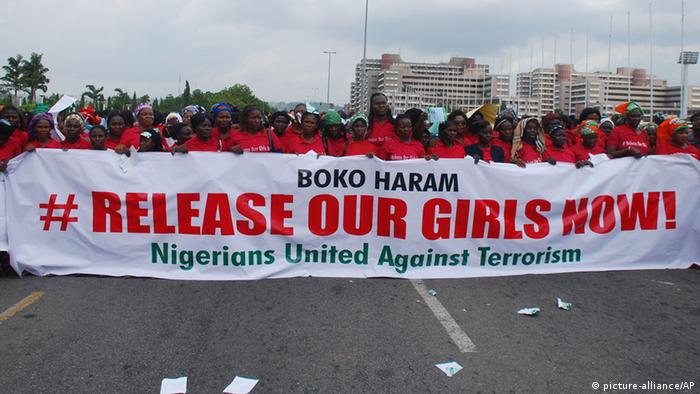 The Islamist militant group daringly kidnapped the Chibok girls in 2014, some have been rescued, others remain in captivity

In addition to education, the UNIMAID offers refuge too  — thousands of students and staff live in hostels on campus. Sulaiman Victor Mshelia remembers it as the safest place in Borno State at the height of the insurgency. In an interview with DW in Maiduguri, the former student also remembers the dread that Boko Haram instilled.

"You will notice fear when there is a strange sound or a strange movement; you will see that the students are very, very security conscience," Mshelia said. "This is an instinct that they have developed to survive on campus. I think they are superheroes."

Suspicions in the seminar rooms

In January 2017, a suspected Boko Haram bomber bypassed security and blew themselves up at a mosque on campus. Several people were killed and more than a dozen injured. One of the bombers was reported to be a 12-year-old girl.

The university mourned the dead, among them a professor from one of its 12 faculties. But the institution remained open. Nigeria's President Muhammadu Buhari was born in the country's north west, some 700 km (435 miles) from Maiduguri

Abdulmutallib Abubakar remembers what an extremely traumatic time it was for lecturers when Boko Haram attacks began. "The students saw some lecturers as insurgents, and the lecturers were also thinking in the classes there were insurgents."

But the lectures went ahead.

"You found that during exams you had the sound of guns, the sound of bomb blasts — it was so chaotic, so traumatic," said Abubakar, who lectures in the Mass Communications Department. "Closing the university would mean succumbing to the pressure of the insurgents who thought that Western education was evil. So, if such pressure had pushed the university management to close, it means the insurgents could have succeeded in what they wanted."

Engaged and looking to the future

That fear still lingers today as Nigerian security forces battle to reign in the militants: "There is definitely fear among the students, but they are equal to the task."

Read more: Why few visas are issued for Africans wanting to come to Germany

Nigeria's security forces have helped UNIMAID stay on its feet, Sule Makama, a Maiduguri-based security analyst, told DW. Around 1,300 security personnel are deployed in the vicinity of the university.

"We have seen in the past years how the Boko Haram had attempted several times to attack the university. We have also seen the activities of suicide bombers attacking even the hostels. But despite that, the university management was resilient  — they refused to close the university," he said.

Nepomuk Riva, the Hildesheim University researcher, was struck by how engaged his Maiduguri counterparts. "You would think that in a situation where the pressure comes from outside, you normally stick to your ivory tower do things like reading books and not looking outside to these really brutal experiences."

Instead, he learned that the opposite was true at Maiduguri and among its academics who have pursued their studies in Germany: "The academics are really keen on using their knowledge to rebuild the society and go into the roots, but also to look into the future."

Cities across Europe are reeling from deadly terrorist attacks. While they're relatively new in Europe, terror attacks have long been a reality in cities in Asia or Africa. How can cities be made safer?

Nigeria: Parents in Borno State to receive allowance for sending children to school

Authorities are attempting to counter the Boko Haram insurgency by offering an allowance to parents who send their children to school. It comes amid reports some familes are 'donating' their daughters to the insurgency.