As Amazon rainforest is decimated by widespread fires and logging, we can look to a long German tradition of burning and clearing woodlands — and solutions that have included systematic replanting and forest management.

Publius Cornelius Tacitus, a famous Roman senator and historian, was the first to write about the forests in the land of the ancient Teutons, a Germanic tribe. His brief study Germania founded the myth of the eerie forest that housed barbarians and robbers alike — a forest so dense that it helped the Teutons keep the Romans off their backs.

But even in the first century AD, these forests were by no means virgin forests, said Hansjörg Küster, professor of Plant Ecology at the Institute of Geobotany at Leibniz University Hannover.

"The Germanic tribes farmed, too," he told DW, adding that crops planted in a forest won't get enough sunlight. Humans changed the face of the forest long before Tacitus came along, he says. But to the Romans, it was a hostile-looking jungle.

Read more: From destruction to rejuvenation: When forest fires are a good thing 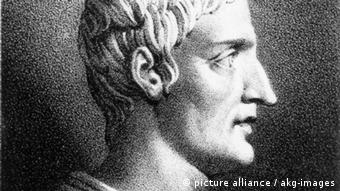 The limit to Europe's forest-clearing

The kind of land clearing that is currently devastating the primeval Amazon rainforests has existed in Europe for more than 7,000 years. Wood was urgently needed to build ships and houses, for smelting iron ore and to make glass. Demand increased until the late middle ages and early modern times.

"In the 17th and 18th centuries, forests in Central Europe were down to a minimum," says Küster, adding that Europe had the same problem Brazil has today.

People realized something had to be done, and since then forests have been systematically replanted with an eye to sustainability.

Nature conservation as we know it today is based on German forestry laws and management, including a tradition of replanting, Küster said. That's something to be proud of, he added — even if German forests are now struggling in the face of climate change.

The forest is still today regarded as a symbol of German identity, celebrated over the centuries by poets, writers and painters. Other European cultures that also have dense forests have a more distanced relationship to their woodlands.

Forests appear in folk songs and myths. It's interesting, Küster notes, that Father Christmas allegedly lives at the North Pole in most countries while his German counterpart shows up come Christmas time from "deep in the forests." 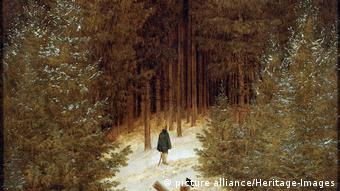 "The Chasseur in the Forest"

In the early 19th century, the myth of the "eerie forest" emerged once again. As Napoleon's troops marched toward Germany, citizens thought to plant trees along the borders to France, hoping the French would get lost in them just as the Romans did so long ago — after all, says Küster, "both spoke a Romance language, and consequently they knew nothing about the forest." As a result, the German forest was glorified even more.

The Romance period marked the height of arboreal mythology. In 1774, German painter Caspar David Friedrich painted a lost French soldier in a painting entitled The Chasseur in the Forest. It shows a lone man in the forest, tiny, peering around at the tall, tall trees.

The forest in film and literature

The world is looking on aghast as wildfires ravage precious rainforests in the Amazon. Not only are such forests vital climate crisis-fighting carbon sinks; they are central to great literature and cinema. Ten examples. (30.08.2019)

The severity of the wildfires in the Amazon have prompted a global outcry. But Brazil isn't the only country struggling to contain out-of-control blazes. In fact, even more fires are currently burning in Central Africa. (27.08.2019)

What life was like 400 years ago in Germany's Black Forest

With a density of trees and hilly terrain, the Black Forest long required its inhabitants to lead subsistence lives. At the Vogtsbauernhof Open Air Museum, visitors experience what life was like four centuries ago. (08.08.2016)

Climate change and monoculture plantations are rendering Germany's forests more vulnerable to forest fires. One solution could be the creation of forests that don't burn so easily. But how is this done, and what does this mean for ecosystems and timber production?