The forgotten Holocaust in Transnistria | Europe | News and current affairs from around the continent | DW | 27.01.2014

Most people think of Auschwitz when the Holocaust is mentioned, but lesser known is the genocide against Jews in Transnistria, who faced death marches, extermination and starvation. DW's Birgit Görtz visited the region. 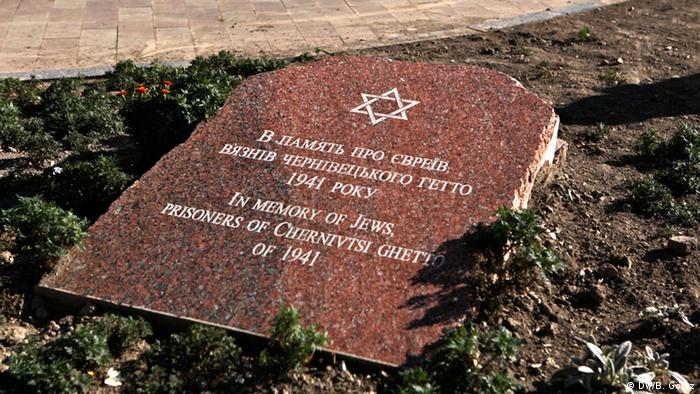 "What is worse: dying in an Auschwitz gas chamber or starving to death in Transnistria?" There is no answer to this rather bizarre question - and the man who posed it, Mikhail, does not expect one.

Mikhail is not a historian, or a taxi driver, but rather an engineer. And yet, he is driving me around Chernivtsi, a city of 240,000 deep in the Ukrainian provinces, about 25 kilometers (15 miles) from the Romanian border in a region known as Bukovina.

Mikhail and I are talking about the Holocaust, which reached this picturesque city two weeks after the Nazis invaded the Soviet Union on June 22, 1941.

The special thing about this place is that Jews were the largest group in this very colorfully mixed city of different cultural, religious and language backgrounds. Mikhail is also a Jew, but his family didn't arrive in Chernivtsi until after the war, like most of the 3,000 Jews who live in the city today. 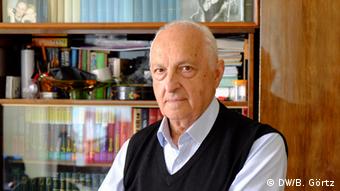 Mikhail drops me off at the Jewish Museum, where I then meet Josef Bursug. Born in 1931, Bursug lived through the Transnistria Holocaust. "My family was lucky not to be killed in the early days of the genocide. We weren't caught in the ghetto or arrested during police raids," he said. Bursug was 10 years old when German and Romanian troops occupied his homeland.

Deaths by the hundreds

Romania, at the time, had a fascist regime under the leadership of General Antonescu. Hitler gave him the strip of land between the Dniester and Bug rivers in return for his support during the invasion of the Soviet Union.

In September 1941, the Romanians began deporting Jews from the Bukovina and Bessarabia districts to what had been dubbed Transnistria, the name the Romanians gave to their new territory - 'trans' meaning 'beyond,' and 'nistru' for the Romanian name of the Dniester river.

"From all the towns in the area, people were sent off on foot to Transnistria, with no exceptions," explains Bursug. How many of these people drowned in the Dniester, how many were shot on the death marches and how many actually reached Transnistria only to die there is not even clear to historians. The figure quoted most often is somewhere around 410,000 victims. 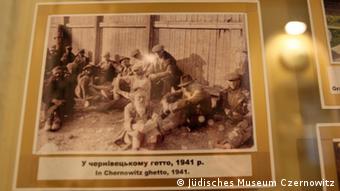 The Romanians sent some 100,000 Jews to Transnistria just from Chernivtsi

Just from in and around Chernivtsi alone, some 100,000 Jews were sent to Transnistria by the Romanians, says Bursug. He has helped collect the stories of survivors and put together little brochures so that the experiences of those who lived through the horrors of the Transnistria Holocaust are not lost and forgotten.

The stories describe what awaited the Jews "beyond the Dniester": abandoned villages, deserted farms, ruined towns - left over from a region that witnessed fierce fighting.

"The Romanians left people to die with no shelter, no heating material, no warm clothes. There was diphtheria, typhus and forced labor. There was no money to be earned anywhere, and people died by the hundreds every day," said Bursug.

"We knew what was going on in Transnistria. Relatives from Bessarabia were there. We received letters, but not in the mail, of course. I remember one German officer who brought us letters, and we gave him money," he said.

Spared based on occupation

On October 11, 1941, the order was given for all Jews to gather in the poorest neighborhood of the city within 24 hours. The ghetto became the staging area for deportations, which began two days later.

"People from the ghetto were taken to the train station every day, crammed into wagons and sent off to Transnistria," Bursug recalls. 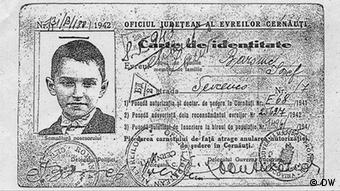 The man in charge at the time was the governor of the Chernivtsi region, General Calotescu. The mayor, Traian Popovic, urged him to halt the deportations, arguing that if all the Jews were sent away, there would be no shoemakers, tailors or plumbers. Calotescu then decided to keep 15,000 of the 50,000 people meant to be deported, said Bursug.

A commission was set up to identify the needed occupations, and those people and their families were allowed to stay. The people on this list were given what were called authorization papers. Josef Bursug and his family were among them. He gave me a copy of his permit, and I realized then that the paper I was holding determined whether you lived or died.

After the German Wehrmacht suffered its defeat at Stalingrad in 1942/43, the stranglehold on the Jews began to loosen. The deportations stopped; persecution and harassment subsided. In early March 1944, the Soviet Army captured Transnistria. By the end of the month, they had taken Bukovina.

But no one has really counted. And the stories of the survivors are rarely told.

Rosa Zuckermann was the protagonist in German documentary filmmaker Volker Koepp’s "Herr Zwilling und Frau Zuckermann." Following her death in 2002, it has fallen to her son Felix to tell her story. (29.11.2012)