The final countdown for Greece: EU calls emergency summit | Europe| News and current affairs from around the continent | DW | 18.06.2015

Only 12 more days until potential bankruptcy. EU finance ministers are trying to find a solution in Luxembourg against long odds. Could yet another summit bring a solution? Bernd Riegert reports from Luxembourg. 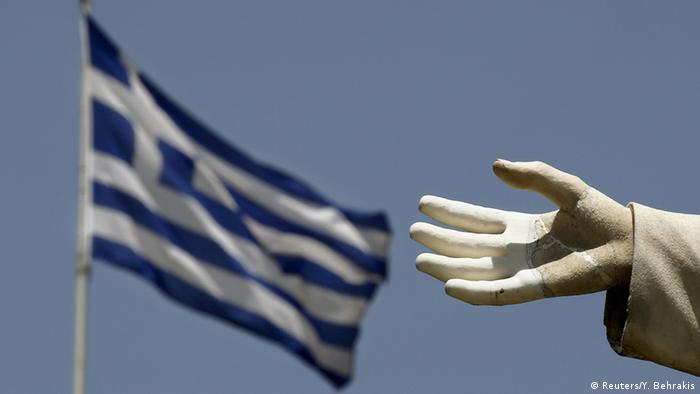 Neither German Finance Minister Wolfgang Schäuble nor his Greek colleague Yanis Varoufakis saw no realistic chance for the Greek debt crisis to be resolved at the Eurogroup meeting in Luxembourg on Thursday. Varoufakis admitted as much before arriving there.

"Now is the time for the political leaders to find a solution," he said in Paris on Wednesday.

One of the leaders Varoufakis implicitly addressed was German Chancellor Angela Merkel, who warned the Greeks in a government statement in the Bundestag that it was actually their turn.

The urgency of the situation was reflected by comments after the eurogroup meeting ended with no result. Discussions on Greece are needed at the "highest political level", EU President Donald Tusk said, adding that he had called an emergency eurozone summit for Monday. 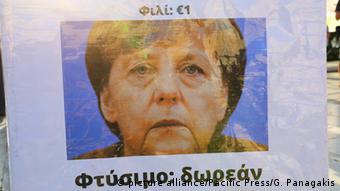 Some Greeks focus their anger and disappointment on Angela Merkel

Another round of negotiations between EU heads of state and government and Greek Prime Minister Alexis Tsipras next week at the EU summit in Brussels could be an option. The same goes for another special summit of the 19 countries in the euro zone.

However, frustrated EU diplomats point out that there has been a number of such summits over the past four months - and there's still no solution. In any case, any formal decisions about the conclusion of the aid program and about the payment of the outstanding 7.2 billion euros (8.2 billion dollars) had to be agreed on by EU finance ministers.

There is little time left to fulfill all the requirements and get approval from various national parliaments. The aid program that's been in contention ever since radically left Prime Minister Tsipras took office in January automatically ends on June 30.

Representatives of the three creditors, the International Monetary Fund (IMF), the European Central Bank (ECB) and the EU commission, suspect by now that the Greek government intentionally wants to risk it all and put all its eggs in one basket. 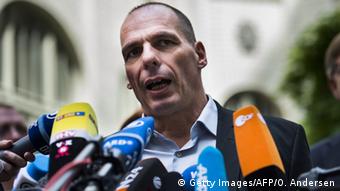 Varoufakis appears to have no intention of giving in

"The Greeks seem to believe that the Eurogroup won't let them go bankrupt because they want to save the euro," one EU official said.

The "political solution" that Varoufakis will call for in Luxembourg again includes a debt haircut or at least a conversion of state debts, especially those owed to the IMF and the ECB. This could be discussed, experts say, but only after the current program has been properly resolved.

"The Greeks have committed themselves to sticking to the rules," one EU representative said. "Now they need to stay true to this commitment."

On the way up, now down again

The head of the European Stability Mechanism (ESM), Klaus Regling, said in Luxembourg that until the elections in January, Greece had been on the right track.

The EU crisis countries Ireland, Portugal and Spain paid back their debt to the ESM, but "Greece was in a whole other category," Regling said. "Until mid-2014, there was great progress. Competitive ability was increased and growth returned. The government was even able to issue new bonds. But since the end of last year, the situation has deteriorated dramatically.

Greek media report that the economy is shrinking again and that Greek banks are under massive pressure. The Greeks have been withdrawing money from their accounts with higher frequency and the number of private loan defaults is rising. As of right now, the European Central Bank is still supporting the largest four banks in the country by granting them "emergency loans." But, the ECB has made clear that this cannot go on forever. 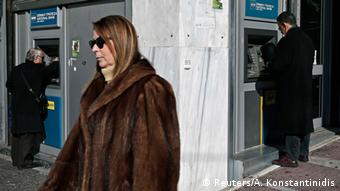 The Greek government has rejected controls on capital flows. The vice minister for international economic relations, Euklid Tzakalotos, told the BBC that if his government couldn't reach an agreement with the Europeans, there would have to be new elections or a referendum. "We don't have a mandate from the Greek voters to give up the euro," Tzakalotos said.

The president of the German Central Bank, Jens Weidmann, warned against keeping Greece in the euro zone at all costs. Possible domino effects set in motion by a Greek exit from the euro zone are not reason enough to give Athens a blank check, Weidmann said. "Terminating agreements and stopping payments to creditors or the ECB would have hard to control consequences for Greece," Weidmann stressed. "Ultimately, the responsibly for keeping Greece in the eurozone lies with the Greek government."

That is also what the EU finance ministers in Luxembourg think: the ball is in Greece's court.

The eurozone's 19 finance ministers are meeting amid speculations that Greece may be forced out of the monetary zone if a deal isn't reached soon. The Eurogroup's chief says its up to Greece to take "the next step." (18.06.2015)

The eurozone crisis by the numbers

The financial crisis in Greece and other eurozone countries has been dragging on for years. We take a closer look at how hard some countries were struck, and how they're trying to get back into shape. (18.06.2015)

With Greek government and international lenders deadlocked in the bailout dispute, chances of a breakthrough ahead of the Thursday meet of eurozone ministers seem remote. (18.06.2015)