A team of auto designers in Dresden is trying to bring back a short-lived cult sports car once known as the Ferrari of the East. 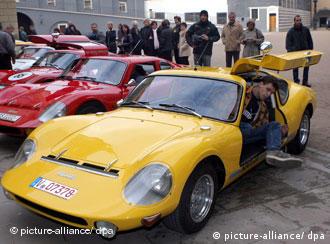 The Melkus RS 1000, with its brave two-stroke engine, was once the pride of motor-racing circuits behind the Iron Curtain. Now, its makers are hoping for a comeback.

Once referred to as the Ferrari of the East, the low-slung, wing-doored Melkus RS 1000 sports car was a proud and popular speedster during the communist era.

Not that there were many of them available. Only 101 of the sleek, drop-nosed racers were made between 1969 and 1979 (today just 80 of them are in shape to be driven). After 1979, the family firm was forced to halt production due to a plunge in the east's economy.

The car was the brainchild of Heinz Melkus, a city driving school operator and himself a fanatic sports car enthusiast in the 1960s and 70s. The original RS 1000 cars were sleek in appearance, and might have been plucked out of a James Bond movie -- had their performance matched their looks.

Molded out of fiberglass, and assembled from parts of the famous put-putting East German Trabant, they were dependent on the 75 horse power, two stroke engines taken from the ir Wartburg 353 sedan. They could reach a top speed of 102 miles per hour. 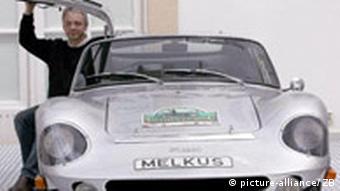 Peter Melkus, the son of original designer Hanz, has brought the car back

East German sports car enthusiasts loved the Melkus RS1000, and mourned its passing. Now, 27 years after communist East Germany's only sports car went out of production, it is aiming for a comeback.

Currently, a five-man-strong Dresden firm headed by Peter Melkus, the son of Heinz who died aged 78 last year, is involved in a relaunch of the car.

Heinz Melkus' 23-year-old grandson, Sepp, told German news agency DPA that the first of the revamped sports cars based on the original was recently unveiled at the Dresden Transport Museum.

"Owners of several of the original RS 100s showed up for the occasion in their vehicles, which added to the atmosphere," said Sepp.

According to Sepp, his grandfather built the first sports cars in the 1960s after he was overtaken on the highway in 1969 by a sleek looking Lotus, on a drive to Yugoslavia.

Although individual private enterprise wasn't allowed in the communist State as such, East Germany was gearing up to celebrate its 20th anniversary at the time and the authorities surprisingly agreed.

All told, 101 of the Melkus RS 100s were made between 1969 to 1979 by Heinz Melkus and a handful of assistants who worked out of a garage near his Dresden home. They were built from segments of Trabants and Wartburgs, secured from factories and junkyards. 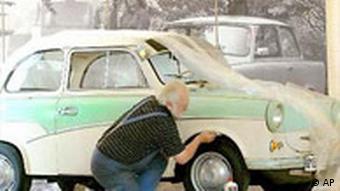 The RS 1000 is built from the Trabent, which has an even broader cult following

At the same time, Hans Melkus gained growing recognition throughout eastern Europe as a racing driver. East Germany's equivalent of Michael Schumacher, he won 80 grand prix events and at the height of his fame was the holder of the Peace and Friendship Cup, the state's top motor-racing trophy.

But Melkus's grandson said the 15 Melkus RS 1000s will be the last of their kind to be made by the Dresden company.

"Once we have completed our remake of the original, we have plans to embark on the next generation - the Melkus RS 2000," he said. The cars are expected to sell for 70,000 euros.

During its 40-year history, the East Germany was hardly a car owners' paradise. Citizens had to wait up to 10 years before obtaining the two-stroke, smoke-puffing Trabant -- popularly known as "Trabi" -- and up to 15 years for the boxy Wartburg sedan.

Nearly 50 years after the first model rolled off the production lines, the car that became a symbol of East Germany can still be seen pottering along German roads. (15.10.2006)