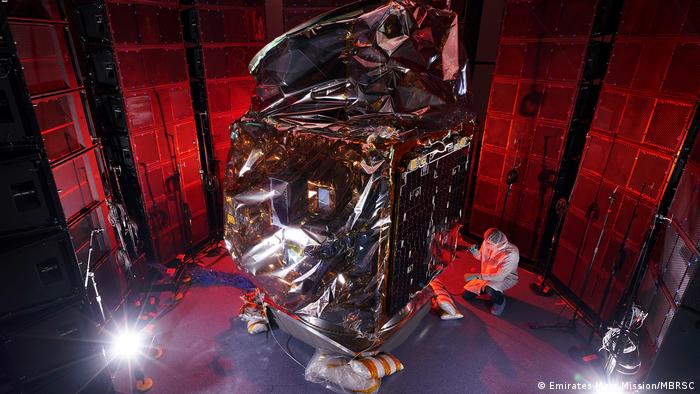 The Emirates Mars Mission has sent an unmanned  spacecraft, or probe, into Martian orbit. As with other current Mars missions, run by China and the US — Tianwen-1 and Mars 2020, respectively — the UAE's mission launched in July 2020. That was when the Earth and Mars were especially close to one another, and that reduced travel time to the red planet by about two months.

The probe's name is Al-Amal — Arabic for "hope" — and, as such, the name is pretty self-explanatory.

Sheikh Mohammed bin Rashid, vice president and prime minister of the UAE and ruler of the Emirate of Dubai, said the government chose the name from "thousands of suggestions ... as it sends a message of optimism to millions of young Arabs."

Read more: The facts on the Tianwen-1 Mars orbiter and rover 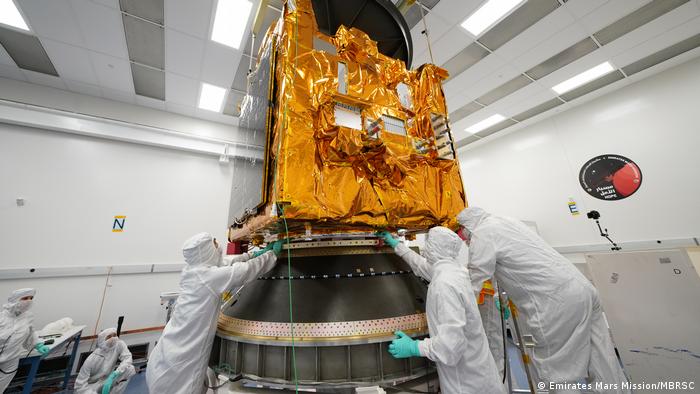 "Arab civilization once played a great role in contributing to human knowledge and will play that role again," Vice President Mohammed bin Rashid said. "The Hope probe embodies the culture of possibilities deeply rooted in the UAE's approach, philosophy and journey of accelerating development."

Hope is the UAE's first interplanetary mission. The operation aims to provide the global scientific community with novel data. The probe will fly around Mars in a way that's never been done before.

The mission was announced in 2014 following a feasibility study the year before. It's been a mere seven years from concept to launch.

UAE's space sector is young and small, but it is one with a successful track record.  It has been vibrant in Earth observation for about a decade.

In 2006, the national space agency, run by the Mohammed Bin Rashid Space Centre (MBRSC), started a knowledge transfer program with South Korea.
That collaboration has produced a clutch of Earth observation satellites, including DubaiSat-1 and DubaiSat-2, which launched in 2009 and 2013. They were followed by a nanosatellite called Nayif-1 in 2017.

In 2018, the MBRSC launched its first "100% UAE-designed and manufactured" remote-sensing satellite,  KhalifaSat.

The MRBSC also has an astronaut program. Hazzaa Al-Mansoori became the first Emirati in space when he flew to the International Space Station (ISS)  on a scientific mission in 2019.

The Hope Probe launched on July 20, 2020 — six days later than originally scheduled. It was postponed due to bad weather, but that is quite common.

Where was the launch site?

It launched from the Tanegashima Space Center in Japan. The same site was used for the KhalifaSat in 2018.

The UAE has also launched missions from Kazakhstan, Russia, and India.

What was it riding on?

A Japanese H-IIA rocket carried the probe into space.

The Hope Probe entered into its Martian orbit on February 9, 2021. The date coincides with the UAE's 50th anniversary celebrations.

Every 18 to 24 months, Earth and Mars align in such a way that the journey — or trajectory — is effectively shortened from a nine-month to a seven-month trip.

Failing to begin the trip during the "launch window" of July to August 2020 would have meant the mission would have to have been waited another two years. But that wouldn't have been good for the UAE's 50th anniversary celebrations, so Hope had to go on time.

Hope has three scientific objectives, but the main goal is to provide the first complete picture of the Martian atmosphere. Once that data has been verified, it will be open to the global space research community.

Goal 1: To understand the climate dynamics of Mars and the planet's global weather map by characterizing its lower atmosphere.

Goal 2: To explain how the weather on Mars affects the escape of hydrogen and oxygen from its atmosphere.

Goal 3: To understand the structure and variability of hydrogen and oxygen in the upper atmosphere, and identify why Mars is losing those gases into space.

The data will be collected at Mars for an entire Martian year.

Another key objective is to offer the global science community new and useful insights about Mars and to further our understanding of how and why Mars is uninhabitable for humans — why its atmosphere wouldn't protect us the same way our atmosphere does on Earth.

But it's not all altruistic. The UAE is keen to expand its science and technology sector to transform the country into more of a knowledge-based economy as the global demand for oil decreases.

Instruments on the probe

EXI: Will study the lower atmosphere of Mars and capture high-resolution images. It will measure the optical depth of water ice in the atmosphere and analyze the Martian ozone.

EMIRS: Will study the Martian lower atmosphere. It will measure the global distribution of dust, ice clouds, water vapor, and temperature.

EMUS: Will measure the levels and variability of carbon monoxide and oxygen in the Martian thermosphere. It will also measure oxygen and hydrogen in the exosphere.

This mission is all about collaboration. 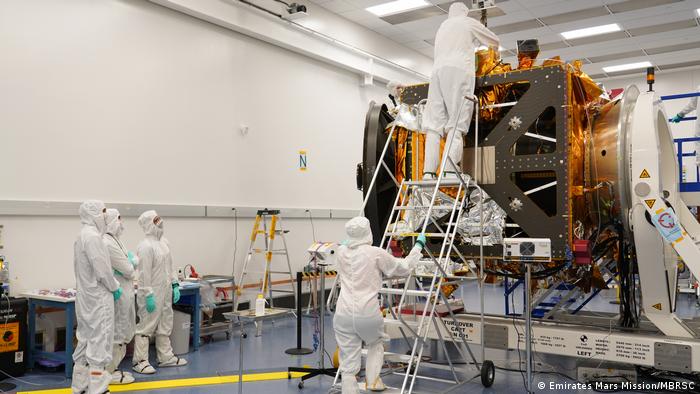 The UAE is keen on international collaboration, but it says it wants to build a community of Emirati scientists and engineers

It also collaborated with the University College London,  which produced a "value analysis" report on UAE's use of space to transform its future.

Space is never easy.  A lot can go wrong. But UAE had success launching the KhalifaSat from Japan, and it was on the same kind of rocket — so, that's a good start. 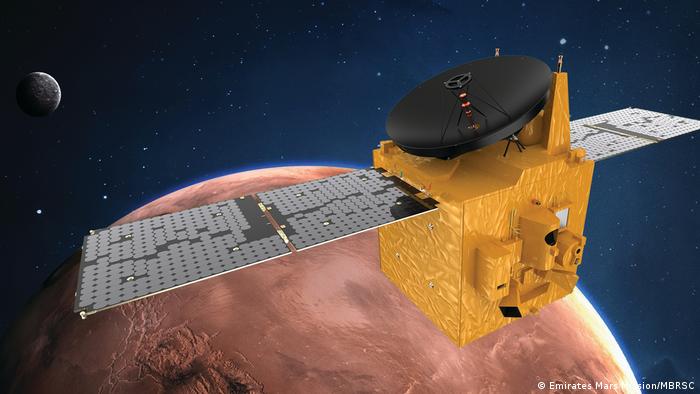 But whether Hope works or not, the UAE have bigger plans in space.

The UAE want to establish "the first inhabitable human settlement" on Mars by 2117.

Part of that plan is its Mars Science City, a collection of laboratories that will investigate the planet, as well as food and energy challenges there and here.

This article was originally published on July 7, 2020. It was updated to reflect developments in the mission on February 9, 2021.