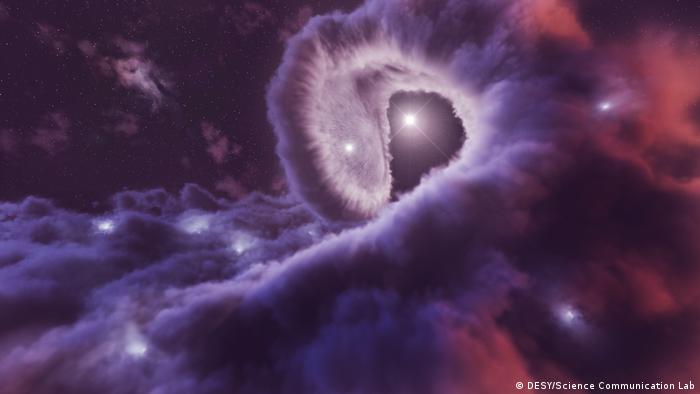 Working with particle accelerators is part of the day-to-day business of nuclear physicists at the German Electron Synchrotron (DESY).

What is less well-known is that DESY is also concerned with completely different types of particle accelerators — those that exist naturally. And their study is primarily the task of the astrophysicists  at the research center.

One such particle accelerator — much larger than the man-made facility of the European Organization for Nuclear Research (CERN)  in Geneva — is the double star system Eta Carinae.

It is located 7,500 light years away in the constellation Carina in the southern sky and generates gamma radiation with an energy of up to 400 gigaelectronvolts (GeV)  — about 100 billion times more than the energy of visible light.

This double star is the first known example of a source in which very high-energy gamma radiation is generated by colliding stellar winds.

The team  led by Stefan Ohm, Eva Leser and Matthias Füssling from DESY observed the double star system with a special telescope at the gamma-ray observatory High Energy Stereoscopic System (HESS)  in Namibia.

Together with animation specialists from the Science Communication Lab,  they then reconstructed how it works in a video animation. The composer Carsten Nicolai (artist's name: Alva Noto) composed the soundtrack.

The researchers published their findings in the journal Astronomy & Astrophysics.

A star system of superlatives

Eta Carinae consists of two giant blue suns. One of them has about 100 times the mass of our sun, the other about 30 times. They revolve about each other every 5.5 years on strongly elliptical orbits. The distance between them varies greatly, roughly between that from our sun to Mars and that from our sun to Uranus.

Both giant stars hurl dense, supersonic stellar winds of charged particles into space. In the space of only around 5,000 years, the larger of the two loses as much mass as our sun has in total.

At the point where the two stellar winds meet every 5 1/2 years, a huge and extremely hot shock front develops with temperatures of around 50 million degrees Celsius.

In fact, the NASA satellite Fermi and the satellite Agile  of the Italian space agency ASI already detected high-energy gamma radiation up to about 10 GeV from Eta Carinae in 2009.

Where does the gamma radiation come from?

"There are different models for the production of this gamma radiation," said co-author Füssling. "It can come from strongly accelerated electrons or from high-energy atomic nuclei."

High-energy atomic nuclei are mainly responsible for the cosmic rays that constantly hit the earth from all sides. Although these rays were discovered more than 100 years ago, it is still not completely clear where such atomic nuclei come from. Because they are electrically charged, the atomic nuclei are deflected by cosmic magnetic fields on their way through the universe. This means that the direction from which they hit Earth no longer points back to their origin.

Cosmic gamma radiation, in contrast, is not deflected. If it can be proven that gamma radiation originates from high-energy atomic nuclei, this would also mean that one of the sought-after accelerators of cosmic particle radiation has been found.

A huge movie camera for atoms and molecules: the European XFEL

Waiting for a newer gamma-ray telescope

"Analysis of the gamma radiation measured by HESS and the satellites shows that it can best be interpreted as the product of highly accelerated atomic nuclei," says DESY doctoral student Ruslan Konno. He has published an accompanying study  together with scientists from the Max Planck Institute for Nuclear Physics in Heidelberg.

"This would also make the shock regions of colliding stellar winds a new type of natural particle accelerator for cosmic rays," he concludes.

Now the astrophysicists want to further substantiate this thesis. In addition to HESS, named after the discoverer of cosmic rays, Victor Francis Hess,  a more powerful gamma-ray observatory will be available to them in the future. Construction work for the Cherenkov Telescope Array (CTA) in the Chilean highlands is already underway.

The telescope left Earth enclosed in a rocket, which blasted off from French Guiana. The revolutionary instrument could help scientists discover extraterrestrial life.

How do you whittle down the 200 billion in our Milky Way galaxy to a mere 21? Focus on the ones that have changed human understanding of the universe, as astronomer Giles Sparrow told DW.