The KATRIN Tritium Neutrino experiment: A giant scale for the tiniest particles starts

Neutrinos are so tiny and inconspicuous that physicists believed for a long time they had no mass. Now, a massive device that scientists say will determine the mass of neutrinos has begun operation in Karlsruhe. 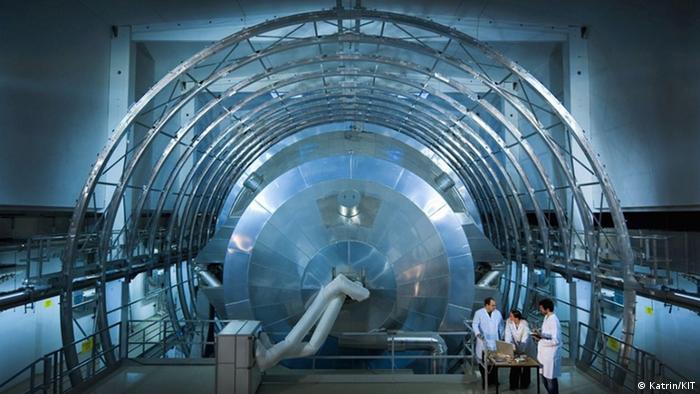 What is the exact mass of the three known kinds of neutrinos? Any answers? No? Well, don't worry, because nobody knows. Not yet. Electron, muon and tau neutrinos are simply too difficult to grasp for scientists.

The ghost particles are electrically neutral, and do not interact with electromagnetic fields, light or matter.

But the Karlsruhe Tritium Neutrino Experiment (KATRIN) hopes to shed light on the question of neutrino mass. On Monday, June 11, 2018, a ceremonial inauguration marked the beginning of measuring operations. One part of the device, the electron source, has been operational since October 16, 2016. But the real fun starts now.

About 200 researchers from 20 institutions in seven countries are cooperating in the experiments at the Karlsruhe Institute of Technology (KIT).

Neutrinos stem, for example, from supernova explosions. Or they have been flying around through the universe since the Big Bang. There are billions of them - coming from outer space and flying right through us, constantly. 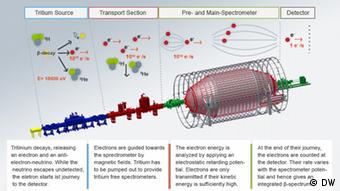 These elementary particles are so small and light that they can penetrate matter with no resistance.

This oblivion to anything standing in their way is what made a famous neutrino experiment by the European Organization for Nuclear Research (CERN) possible.

The scientists shot neutrinos from a particle accelerator at the Swiss-French border near Geneva all the way through the Earth's crust to a detector inside Mount Gran Sasso in Italy.

The long trip from the Alps to the tallest mountain in the Apennin mountain range — right through all kinds of layers of soil and rock — did not deter the miniscule neutrinos one bit. 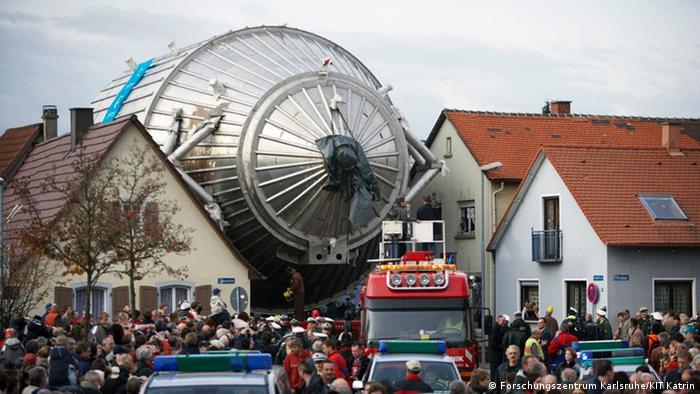 In fact, all neutrino detectors - regardless of whether they are measuring artificially generated neutrinos or those coming from space - have been buried deep in Antarctic ice or rock, to prevent interference from any unwanted rays or fields.

Neutrinos are the one elementary particle that give scientists a big headache. Two physicists get a Nobel Prize for solving one more mystery about them: neutrinos change their identity. (06.10.2015)

Researchers have told the International Conference on Neutrino Physics and Astrophysics in Japan that results challenging a major Einstein theory in 2011 were wrong. (08.06.2012)

French physicists have built a special detector called Nucifer, which they hope will lead to the discovery of a new, subatomic particle and shed light on dark matter. (04.07.2012)

As the radioactive hydrogen isotope tritium decays, besides neutrinos, electrons are also emitted. Since the researchers know the mass of the tritium atom, they will now seek to determine the mass of the neutrino by measuring the other products of decay.

The KATRIN facility consists of a room in which beta decay takes place. The neutrinos disappear somewhere — anywhere. What's left are electrically charged electrons, which can be steered into a specific direction by a magnetic field: Through a spectrometer to a detector.

The spectrometer decelerates the electrons using an electrostatic field, so that only a few of the electrons will make it to the detector. By controlling the strength of the field, the physicists can now evaluate the energy of the passing electrons — and that means their mass.

Following Einstein's law on equivalence of mass and energy, particle physicists usually give the mass of elementary particles in the energy unit of electron-volts (eV). 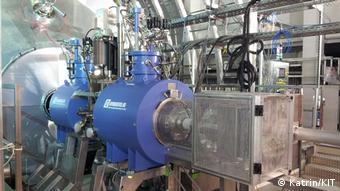 The biggest challenge for the researchers at the Karlsruhe Institute of Technology is in reaching the precision they require. So far, physicists estimate that a neutrino may have a mass of as little as 2.2 eV.

But the electrons, which KATRIN actually detects, are much heavier. They have a mass of about 511 kilo-electron-volts. This would mean that an electron is roughly 250,000 times heavier than a neutrino.

One metaphor for such an experiment would be: First weighing a car, breaking off the rearview mirror, blowing the car up and sweeping up all the fragments, then weighing them together.

In the end, one could draw conclusions about the weight of the missing mirror.

What does all this have to do with dark energy and dark matter?

Knowing the precise mass of neutrinos is not just relevant for particle physicists — but the results may hold important information about the interactions between neutrinos and the Higgs-Boson, which CERN said it had detected and confirmed in 2012. This is important to prove or disprove the validity of the current standard model of particle physics.

But the scientists also hope to get closer to answering two other mysteries of physics: Those of dark energy and of dark matter. Dark energy is supposedly responsible for the ongoing expansion of the universe.

Dark matter makes up about 95 percent of the universe but remains for scientists - just like neutrinos - hard to grasp.