IceCube - the largest particle detector in the world - is located directly on the South Pole. Now, its has measured "cosmic neutrinos" for the fist time - opening the door to a new kind of astronomy. 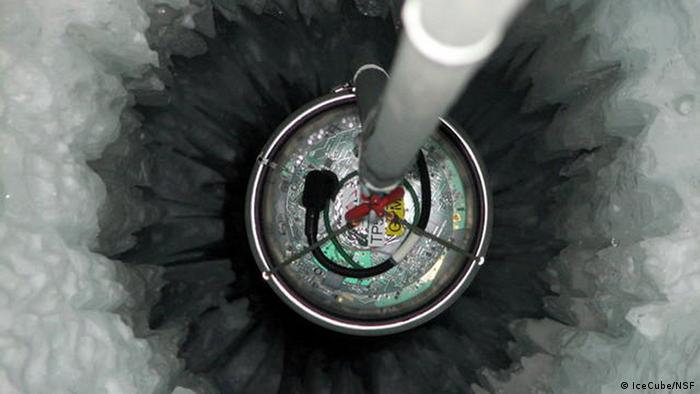 Neutrinos are probably the strangest of all elementary particles. Quick as light, unimaginable numbers of them race through space. But they rush through like ghosts, without leaving a mark on everyday life. Researchers now want to make use of the tiny particles - for a new type of telescope.

The decisive breakthrough came during an experiment at the South Pole, where the "IceCube" detector is embedded in Antarctica's eternal ice. The huge machine has for the first time actually tracked neutrinos in the universe, thus providing evidence that the concept of a neutrino telescope works.

IceCube was finished in 2010. Then, physicists cut 86 holes in the ice with a hot water drill, each 2.5 kilometers deep. A long steel cable was lowered into each hole. Attached to these were basketball-sized glass globes, like beads on a string. More than 5,000 of such lines were spread throughout one cubic kilometer. Acting as highly sensitive light sensors, these pick up the signals of the neutrinos that get "stuck" in the Antarctic ice sheet.

"Because of their ghostly essence, most neutrinos rush through our detector and leave no trace," says Christian Spiering, a physicist at DESY in Zeuthen near Berlin. He's a member of the 250-strong IceCube team. "But very, very rarely, one of the particles encounters an atomic nucleus," Spiering continues. This produces bluish flashes of light, which the glass beads are able to snap up.

IceCube has already registered more than 100,000 neutrinos since 2010. Bu the catch is that these neutrinos come from the earth's atmosphere, where they are created through constantly bombardment by cosmic rays from space into the air surrounding our planet. "We're actually searching for a different kind of neutrino," says Spiering. "Particles that have not been generated in the earth's atmosphere, but were created further away, in outer space," he says. 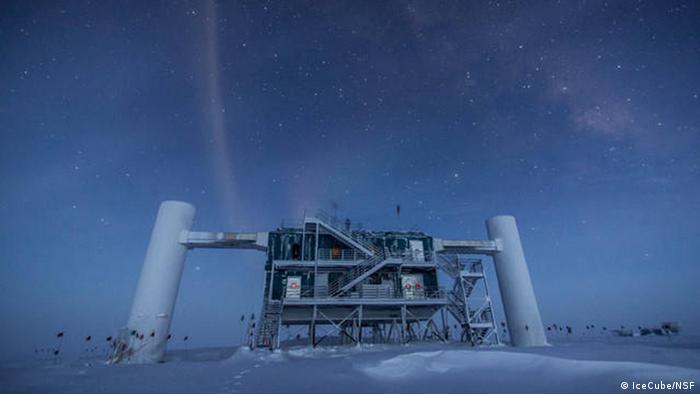 Ice-cold research laboratory in the Antarctic

"Cosmic neutrinos" is what experts call these ghostly outer space particles. They result from cosmic acts of violence, such as when a black hole pulls matter towards itself through its unimaginable gravity, and then swallows it. Or when a star explodes at the end of its life, with such tremendous force that it becomes a supernova.

If it were possible to measure the resulting neutrinos, completely new details - for example, about black holes and supernovas - could be revealed. Conventional telescopes cannot offer that kind of information.

IceCube could now have picked up the first cosmic neutrinos, 28 in number - a breakthrough for physicists. "We have opened a new observation window into the cosmos," says Christian Spiering. Now experts hope to learn new details about the most extreme phenomena in space. Researchers are also looking into possible conclusions that could already be drawn from the 28 neutrinos that IceCube has already picked up, for example if multiple neutrinos came from the same direction.

Indeed, the researchers registered a slightly larger amount of neutrinos having arrived from the direction where the center of the Milky Way lies. "But that is not significant yet," says Spiering. "The possibility that these are only statistical outliers is still quite large. To get clarity, we have to wait for another year or two and gather more data," he adds.

But Spiering and his colleagues are ready to celebrate now. They're relieved that IceCube is actually able to detect cosmic neutrinos - something that was not necessarily guaranteed. "At one point, we had given up hope," Spiering admits. "The fact that it has actually worked is of course a reason to open the champagne bottles."

The first spacecraft named Hayabusa - the Japanese for falcon - soared to heights that even its designers admit they had hardly dreamed might be possible. The same team has sky-high expectations for its successor. (20.12.2013)

Stargazers are in for a treat on November 28 when the ISON comet passes within a stone's throw of the sun. Never before have scientists been able to get so close to such a comet. (27.11.2013)