The difficulties of being gay in Iran 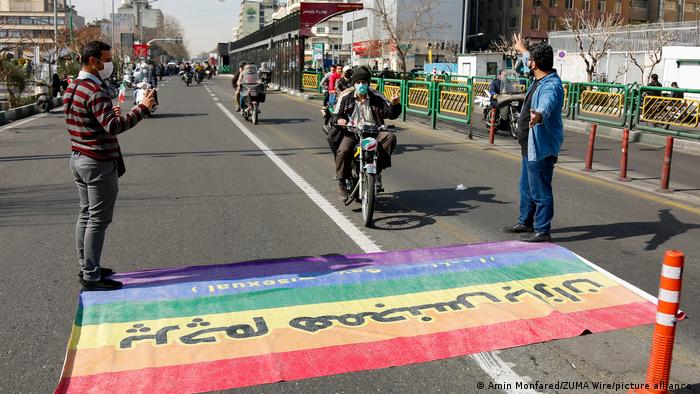 Police in Iran enter a young man's apartment looking for signs of "misconduct." They rummage through his laundry and check his computer. The young man, who goes by the name of Sahand, stands accused of violating the laws of the Islamic Republic — a relative reported him to police after finding him in bed with another man.

"It was terrible," Sahand told DW. "Right after they found us my father was there screaming at me and telling me I ruined his life. He wanted nothing more to do with me and never wanted to see me again. The police came a while later. My mom then called my sister, who I had earlier confided in."

Sahand later found out from his sister that it was a relative who had betrayed him. After his apartment and his life were turned upside down, it became perfectly clear to him that he had to flee Iran. While studying abroad, he had the opportunity to travel to Europe, where he applied for asylum. He has been living in Germany for a year now and hopes his asylum application will be approved.

According to the latest report by Ahmed Shaheed, the United Nations Special Rapporteur on the human rights situation in Iran, there is great reason for concern. Iran's gay, lesbian, bi- and transgender communities face both widespread discrimination and ongoing human rights violations, the report said. "High-ranking officials" said Shaheed, "use hateful rhetoric when talking about gays, referring to them as sub-human or just plain sick."

Under certain circumstances, those convicted of having gay sex can face the death penalty, while others caught kissing, holding hands, or just caressing, can receive public lashings. The UN official said that by criminalizing consensual sex, the authorities in the Islamic Republic have legitimized violence against gays by both public officials and private citizens. He said such violence includes "torture, blows to the body, and even rape carried out by law enforcement agencies and vigilante groups."

Gays, lesbians, and bi-sexual Iranians are the victims of arbitrary justice in Iran and don't expect fair trials for those accused of wrongdoing, says the UN official.

Tehran's repressive policies against LGBT groups are no big secret internationally says Patrick Dörr, a coordinator with the Queer Refugees Project in Germany. "Many queers who've fled Iran talk about threats of violence they've had to endure and not just by members of their own families but also by the Iranian police."

He said there have often been cases of lesbian woman and gay men being forced to have gender reassignment surgery. Gay men have also suffered though procedures tantamount to gender mutilation under the mistaken assumption that they were actually women. As one can imagine, the psychological consequences of these interventions are devastating for those affected," says Dörr.

What bothered him the most was the feeling of shame, says Ali, whose name has been changed. While speaking with DW, he says he, too, fears reprisals and has applied for asylum in Germany. Like Sahand, he lives in a facility set up to assist LGBT-refugees in Germany.

"When I was a kid, my cousin and I were playing and we pretended to get married with me as the bride. When my father saw me he was so mad that he took a knife, heated it over the stove and burned a mark into my forearm." To this day, the long scar on Ali's arm is still present.

"I was never allowed to play the bride again, because I was a boy had to behave like a boy. My father is actually very well-educated and not even religious but still wants a masculine son. He'd rather see me dead than gay."

Ali hid his homosexuality for years. "I was ashamed and asked myself why I wasn't like the others. I've been stressed out my whole life. When I was young I went to a therapist but just before our therapy sessions were supposed to begin I was in a bad accident and almost died. That's when things changed. That's when I told myself I had been given a second chance. I wanted to live the way I wanted to live. I stopped therapy and accepted the fact that I was gay."

Of course it was difficult: "All minorities in Iran have problems. But people like us aren't just sentenced to death by the state, their souls also die a thousand deaths each day for having to pretend they are someone they're not. They are judged each and every day yet their wounds are invisible."

Sahand agrees and says the level of social ostracism gays face in Iran is enormous. "I too went into therapy after a sister gave me the name of a female therapist. And I was lucky. After three, four appointments she told me that I had homosexual tendencies and that I would only be happy if I accepted that I'm gay. And that's what I did. But it's difficult. I haven't spoken with my father since our fight. I'm still in contact with both of my sisters and through them I have loose contact with my mom."