Following several brutal attacks in Afghanistan, Germany has stopped forced deportations to Kabul - for now. Refugees due to be deported - like the 28-year-old Ramin Mohabat, fear for their lives. The story that Ramin Mohabat (pictured above) narrates is barely tolerable. It has been two years since he witnessed the beheading of a fellow traveller in the western Afghan province of Herat. The Taliban, who controlled the area, did not like the look of the man who had returned to his country from Iraq. He had dared to venture into Taliban territory without a beard and in western clothes - a "lapse" that he had to pay for with his life. The Taliban henchmen severed the man's head in front of his fellow traveler's eyes.

Even today, Ramin Mohabat winces when he speaks about it. The 28-year-old used to work as a war reporter and newsreader in Herat. Meanwhile, Mohabat is one of the single men who have fled from Afghanistan. His escape to Germany was torture, one man died in his arms. For many months he was uncertain whether he would reach his destination: Germany.

Germany's foreign minister has said the Taliban must be negotiated with to find a political solution to the situation in Afghanistan. The Taliban controls or influences 40 percent of the country. (04.06.2017)

Now he has settled down here, lives in the small town of Hofheim in Hesse and works for the city administration as a photographer. His German is almost fluent. Nevertheless, Ramin Mohabat is one of the young men who is unwanted in Germany. The Federal Office for Migration and Refugees (BAMF) has already decided on his case - his asylum application has been rejected. The 28-year-old should have left a long time ago. He was lucky that lawyers and human rights organizations stood up in his support.

And in this manner, Ramin Mohabat, threatened by his own deportation, thinks about the fate of that man who had returned to Herat. Mohabat is afraid of the revenge of the Taliban. As a war reporter, he had released the number of dead Taliban fighters. "Whoever does that, pays with his life," the Afghan says.

There are no safe areas in Afghanistan

He indicates that he cannot comprehend the reasons for his deportation any more. "Last year it was 'Refugees Welcome," this year everyone is saying goodbye and I don't know why." The official reasoning, that there are safe areas in Afghanistan where people can be deported to, is cynical, Mohabat thinks. He asks politicians with such arguments as to where these safe areas are to be found. And he asks them to move around Afghanistan with him, without the usual security forces and armoured vehicles.

Even if the federal government says that young men fit to work can create a new livelihood in the country's safe areas, it is a proof of very little expertise regarding the problem, Ramin Mohabat says. Strangers cannot settle down in another region without any family ties. "People in Afghanistan see each other every day five times in the mosque." Someone who does not have a family, whose parents are unknown there, will be quickly treated as a foreign spy. 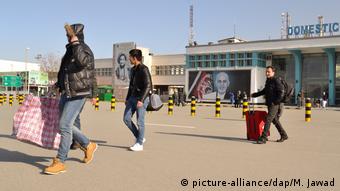 Afghan deportees after their arrival at Kabul

Furthermore, many returnees fall prey to extortionists and criminals, who think that their victims have a lot of money because of their western clothes and sports shoes. Returning to areas controlled by the Taliban is out of the question, the refugee says. Because for them, anyone who has been to Europe is seen as a collaborator of Christians.

Ramin Mohabat has meanwhile appealed against his asylum rejected. The process could take between one and two years. He can stay here, but his initial motivation, to gain a foothold in Germany, has left him. "Why should I study, if I am not allowed to stay?"