Are baptisms being used to prevent refugee deportations? | Germany| News and in-depth reporting from Berlin and beyond | DW | 08.06.2017

Their names are Amir, Yaqob and Nesrin. They come from Afghanistan and Iran, but their new home is Germany. Here, they get baptized. Are refugees fraudulently using baptisms to improve their chances for asylum? 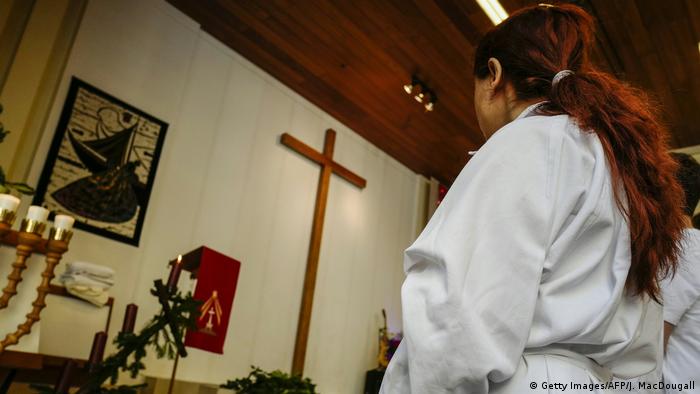 "The confessions of faith I get to hear are affecting me because they are delivered with such euphoria," says Irmgard Conin. She is a pastoral assistant as well as the head of "Fides," a Cologne-based Catholic information center for people with religious interests. This year, she will accompany five refugees on their road to baptism. Yaqob is one of them. "He is very passionate about this, and he's an asset to the congregation," she says.

A new language - a new religion

Is conversion a reason for asylum?

Fleeing from Tehran's secret police, more and more refugees from Iran are converting to Christianity. But are they doing it out of conviction? DW's Astrid Prange reports. (24.12.2016)

Yaqob comes from Afghanistan. Now living in Cologne, he finally wants to receive his baptism. The reasons given by people who adopt a new religion were manifold, Conin explains: "Some want to leave behind the Islam practiced in their country of origin. They say that Christianity is the true religion of love." Others seek identification with Germany: living here, they want to be Christians, she adds.

When Muslim refugees ask for a baptism in Germany, they often raise suspicion: Are they merely hoping to improve their chances for political asylum by converting to Christianity? This discussion was rekindled recently when one Afghan man got baptized while serving time in prison, thereby preventing his deportation which had already been arranged. Subsequently, he killed a small boy in a refugee shelter in the Bavarian town of Arnschwang on Pentecost weekend - an awkward incident for both politicians and clergy.

For some time, politicians of all denominations have been calling for systematic deportation of asylum seekers who have committed criminal offenses. The Arnschwang perpetrator, for example, was to be returned to Afghanistan; however, the Munich administrative court responsible for the case put the deportation on hold. The court argued that by converting from Islam to Christianity the man was facing torture or even the death penalty in his native country. 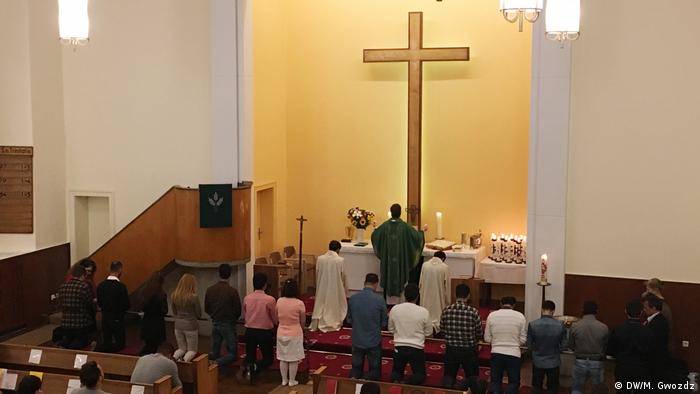 In this Berlin church, 18 former Muslims were baptized

Political pressure is rising. It is believed that churches scrutinize the seriousness of their baptizands' motives only superficially. Bavaria's interior minister, Joachim Herrmann, said he expected from both churches and courts "that they look very closely into whether someone really converts to Christianity." Ulf Küch, the deputy chairman of the Federation of German Detectives (BDK), generally takes a dim view of baptisms of Muslim refugees. He believes their conversions are "ruses which put them in a position to remain in Germany. If the perpetrator's deportation failed because he changed religious faiths, you just have to add two and two together."

Was the murderer really an avowed Christian? Was the Afghan man's sincerity surveyed in a satisfying way? Or did he, by changing religious faiths, try to fraudulently obtain a residence permit? In a statement to DW, the Munich administrative court said the decision, in this case, was not an easy one to make, "because a person's religious identity, being an intrinsic fact, can be determined only on the basis of the asylum seeker's assertions." For example, a detailed personal interrogation of the asylum seeker or of congregation members could help prove whether a conversion to Christianity was based on a serious and firm religious belief or whether it was just done due to tactical reasons, with improving chances of receiving asylum in mind.

The Federal Office of Migration and Refugees (BAMF), which is responsible for deportations, does not cast doubt on a change of religious convictions ascertained by baptism certificate per se, it stated in response to a DW inquiry: "Applicants must plausibly prove that they will practice the new religion when they return to their home country and that is why they will be persecuted in a manner that is covered by asylum laws." BAMF added: "It is generally taken for granted that diligent baptism support on the part of Christian congregations has been provided."

Grounds for asylum or question of faith?

It is necessary to have a months-long process of preparation and review prior to a person's baptism and initiation into the Church, stated the Catholic German Bishops' Conference. This applies to all baptism candidates, regardless of their origin or cultural background. The long, painstaking road of baptism support makes sure that there is a certain deterrent against abuse, says Klaus Hagedorn, refugee relief coordinator in the archdiocese of Cologne. He recounts that he, now and again, receives phone calls from refugee aid workers who seek to halt an imminent deportation by baptism. "We respond by not baptizing," he emphasizes.

The Catholic German Bishops' Conference, as well as the Council of the Protestant Church in Germany (EKD), do not see a nexus between refugee influx and an increased number of baptisms - which didn't exist anyway. Thomas Zimmermann, a Cologne-based Protestant provost, confirms that, across affiliated congregations, less than 10 adults had undergone baptism during the last year.

In her baptism prep talks, Irmgard Conin does mention the issue of asylum. For a conversion would also mean persecution in the country of origin. "In 99 percent of all cases, there was a real interest in acquiring a liberating religious faith - even at the risk of a breakup with the family," she says. "This year, two men have in fact backed out because they were to be deported. Their fear of imminent reprisals in their home country was overwhelming."